What Happened to the Peacock Bass?

By Bill Schultz - May 1, 2010
In 2009 I wrote two articles for Lake-Link on my experience fishing for peacock and largemouth bass from a kayak in the canals and small lakes just southwest of Ft. Lauderdale, in Weston, Florida.

It was so much fun that when work took me back to the area twice this winter, I scheduled two days of fishing on each trip with friend and avid bass angler, Steve Starr. Steve has fished both peacock and largemouth from kayaks for years and certainly showed me a great time last year. I knew it had been terribly cold in Florida all winter, especially during January. As Steve and I talked leading up to my first trip in February, he told me he hadn't seen a peacock since late fall, which had us both concerned.

In my first article last year I noted that the peacock bass were introduced to the canals of coastal Southeast Florida in 1984. Stocking was discontinued after 1987 when it was determined that natural reproduction was taking place. These bass will not survive in water below 60 degrees so the canal system, which rarely drops below 65 degrees, was a perfect place for this tremendous game fish. One of the reasons for this is the Biscayne Aquifer that lies just a few feet below ground. In winter the warmer water flows from the aquifer into the canals and creates the warm temperatures critical to the survival of many exotic fish, including the peacock bass. 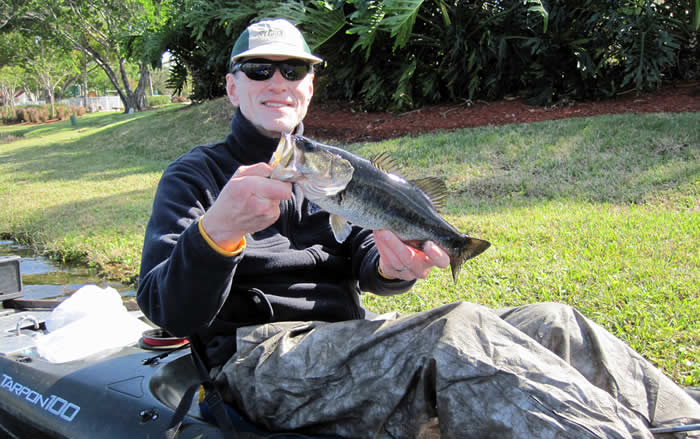 During my first trip, the temperature was dropping to 40 degrees at night and only making it to the middle 50's during the day. We knew that even if the peacock bass were still in the system, it would be unlikely for us to catch any as they become inactive in colder water. So, we focused on largemouth, which was still going to be a challenge. Due to the cool temperatures we only fished for about 3 or 4 hours each day. The picture show us more bundled up than we had hoped for. We originally thought we'd have our best luck slowly working wacky-rigged YUM Dingers. Having no luck, Steve went to his custom "willowrap", shown with our smallest bass and I went to my "go to" presentation, slowly swimming a Kalin's Lunker Grub on a Gopher Tackle 3/32 oz. mushroom head jig. The bass seemed to react to the movement of these presentations and we boated 25-30 smallish largemouths during the two days.

With water temperatures back to normal in late March we were disappointed in not finding any peacock bass and again focused on the largemouth. The first day we caught about 50 largemouths in five hours of fishing. I used the Kalin's Lunker Grub in Blue Pearl Salt & Pepper and also caught a few on a wacky-rigged 4" YUM Dinger in Ozark Smoke. Steve had luck with his "willowrap" and a Torpedo topwater. The next day we expected the bite to improve, but a change in the weather slowed the bite and we only caught about 25 in four hours of fishing.

When I returned from my second Florida trip, I called Melvin Burnside, Fisheries and Wildlife Biological Scientist II with the Florida Fish and Wildlife Conservation Commission. Melvin, an avid angler himself, confirmed that due to the very cold winter, most of the peacock bass in the waters we fished had died. He said this also happened in 2000 and the peacock bass bounced back. He noted that some of the peacock bass survived in the Miami area and south of Miami, so the prospects of eventually coming back will be good. Let's keep our fingers crossed because fishing for peacocks is a tremendous experience. Steve, who is originally from Wisconsin, has packed the kayak on the SUV and is back in Wisconsin to chase smallies until fall.

Even though I was sad and disappointed with the peacock situation, it was still great getting out in a kayak in February and March and catching largemouth bass on water that isn't frozen.