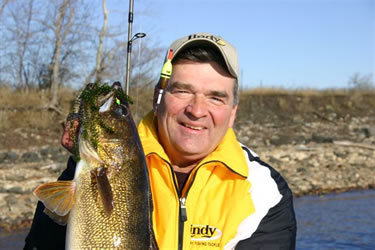 Understanding how water temperature impacts walleyes is vital to finding fish early in the season. A difference of a degree or two can mean the difference between no fish and a 100-walleye day.

Take the time clients asked Greg to guide them specifically on Muskellunge Lake shortly after the Wisconsin walleye opener in May. The deep, clear-water lake would not have made his list if he were asked to come up with his top places to target at that time of year. They tried several places without luck before stopping to eat a sandwich and consider their options. As they munched away, the wind drifted the boat into a shallow bay. Greg noticed the temperature reading on his Humminbird 998c SI sonar rise from the mid 40s to the low 50s. He also noticed something else - virtually hundreds of fish with a slight brush of white on their tail fins were swimming away beneath the boat. Every walleye in the lake was crammed into that single spot or so it seemed. Walleyes came on nearly every cast from that point on. Action was furious.

After he got a chance to think about what had happened, the experience reinforced what he'd learned during years of fishing knowledge gained as a Northwoods guide. Warmer water early in the year (May thru June) is key to walleye fishing success. Forget the myths about the big spawned-out females heading to deep water to rest. That logic set me back years from catching trophy size fish! They might go deeper at night to find slightly warmer water at this time of year when temperatures can still plummet when the sun goes down. But by mid-day, walleyes will seek out the warmest water they can find. They can often be in shallow water less than 10 feet deep. " Bohn - Walleyes will travel miles to find slightly warmer water". Even (1 to 2) degrees is a big deal. Very important!

The "why" is simple. Warm water turns on the early weed growth that ignites the food chain. Weeds, even young ones, provide oxygen and microscopic plankton that attract forage fish like young-of-the-year perch. They, in turn, draw predators like a magnet. Vegetation also gives walleyes a place to hide from the larger fish like muskies and northern pike determined to eat them. Also weeds, even dead ones will grab and absorb heat from the sun.

Here's another advantage of focusing on the weeds early on - your friends will be off fishing rocks far away. Too often weeds are considered only a mid- to late summer pattern. This type of situation is NO second tier spot. Fishing pressure early on the weeds- early in the year is almost nonexistent.

Knowing the warm-water difference eliminates a lot of guesswork about where the walleyes will be. Simply seek the shallow bays and isolated pockets where water warms faster. Don't launch the boat and go racing off across the lake. You might overlook a place right under your nose. A few of my favorite spring walleye producers are within spitting distance of the boat landing. No area is too big or small to hold walleyes. Northern bays usually warm first because of the direction of the sun. But wind can make all the difference. A breeze will blow warmer surface water this way or that. The walleyes will follow it, and so should you. This system works. Forget everything else-just go where the winds blows. 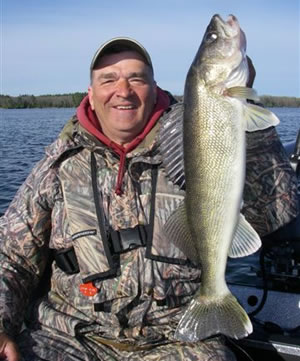 Once you located the warm water, narrow the search more by keeping an eye out for structure. If a sand bar rises from 10 feet of water to 2 feet, weeds will be present on the top, on the edge and at the base. It may take time to find the precise spot on a spot, especially if the bar is large, but you can milk a spot like that for 20- or 30 walleyes at a time. Leave today, return tomorrow and there'll be more fish there again. Leave this spring, return next spring, and the spot will be active then, too, if the warm water is present. A place with little action can explode in a heartbeat if the wind direction blows warm water onto it. Likewise, a spot on fire and cool dramatically if the wind blows hot water away. Be sure to quick-save the coordinates on the Humminbird GPS. You can always remove the waypoints later, if the spot doesn't pan out. The same will hold true for isolated humps. It's worth the time to motor around a bay looking for shallow bar structure that often does not show up on a map. Just like with a minor temperature difference and tiny bays, don't overlook even the slightest change in depth. A foot or two can spell success. My favorite scenario is when the wind blown waves create a current around the sides of these shallow bars. For example watch for this situation to develop between a sandbar and the shoreline.

Not all weeds are the same. Some varieties emerge sooner than others. Some grow thick and tall while others hug the bottom. As a result, different approaches are needed. For example, Elodea is present in most bays in northern Wisconsin. It loves the sun. A north or west bay will have a lot of the stuff. It doesn't have to have warmer water to start growing. Elodea can be hard to locate because it grows tight to the bottom, from just inches tall maybe a foot or two high early in the year. If you see an angler casting a big jig with no bait, he isn't crazy. He is checking to see if he can snag some elodea. You'll know he found some when he stays put. Use a 1/16th ounce Veggie Jig which Greg designed for Lindy Legendary Fishing Tackle, add a plastic tail or live minnow and drift over the area. Try to determine if the elodea is everywhere or only in small patches. Watch the Humminbird screen closely, for signs of weed structure. Drop anchor if you catch a fish or feel a strike. Put out slip bobber rigs and use the wind to drift the bait over the top of the weeds. The slip bobber and fathead minnow approach is deadly early in the season.

"Not all weeds are the same. Some varieties emerge sooner than others. Some grow thick and tall while others hug the bottom."
Green cabbage comes in broadleaf and narrowleaf varieties. Brownleaf cabbage is present in dark water, which warms sooner than clear water. Unless you knew better, its color may make it appear dead. But, it is very much alive. How high the plants will be early in the season is contingent on how warm the water is. Any cabbage weed vegetation growing in 8ft of water or less is key.

Cabbage is thick stuff even early in the year. Weedless jigs and plastic work well - but they must be fished carefully. Cast and reel back s-l-o-w-l-y. Stop reeling when you feel the jig pulling over a plant. You'll know the difference between a weed and a fish. With a walleye, you'll feel the hit or the line will start moving. If not, let the jig fall back to the bottom to the walleye waiting in ambush at the bottom of the stalk. Twitch the jig. No strike? Then reel slowly again. Do not set the hook unless you are sure it's a strike. Otherwise, the hook will merely pull into the plant, the plant will be uprooted and the walleyes will quickly spook.

Favorite plastic bait? The Fluke, a 4-inch plastic minnow replica made by Zoom. The Baby Bass color resembles an emerald shiner, which are common in many Northwoods lakes. When you resort to plastic, upsize the jig slightly to account for the buoyancy. If you'd usually use a 1/16th ounce jig, use an eighth, an eighth, use a quarter.

Slip bobbers also work. Just leave the bait above the weeds and let the walleyes come to you. Weeds thicken and grow deeper by late May, June and July. Coontail grows at the edges of the cabbage and that's where the walleyes will show up later into the season. It's a great walleye weed. You'll fish it through the end of the season. The weed edge could be 8 to 20 feet or more depending on water clarity. Find the edge, then trace it out using your GPS looking for turns and other irregularities. Walleye will be concentrated at those spots. Anchor the boat just off the edge and cast parallel to the edge. You might have to use a quarter-ounce jig to reach the bottom with your plastic bait.

Warm water and weeds - they are a deadly combination early in the year.

Greg Bohn
Legendary Walleye guide, Greg Bohn has evolved into one of North America's foremost fishing educators and tackle designers. Bohn has been a pioneer in walleye tackle technology and presentation techniques for over 35 years! For more information on Greg you can visit his website at www.gregbohn.com.
BITS & BITES
Advertise here
Advertise here
Please take a moment to visit our sponsors. Without them we would not be here.