The Water Wolf in Sheep’s Clothing 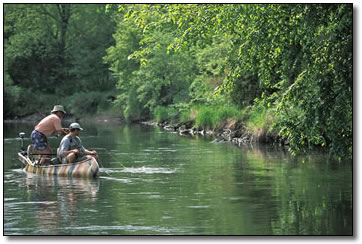 The world's a harmonious place when Bill Plantan slides his canoe inconspicuously into the flow. A morning fog masks his craft, its intentions, and most of the river panorama. Unseen riffles trickle. Something crunches in the dried leaf litter, likely a squirrel, maybe an angler making his way down to the bank. In the distance an aroused turkey gobbles - it's that time of the year.

The peacefulness deepens, too, as Plantan vectors into the current and parts the haze. Just ahead lays the first of many glossy pools of promise. He taps a particular combo, a topwater package, leaving a medley of other pre-rigged combos behind on the customized rod rack of his River Ridge Custom Canoe. With its arsenal exposed, this seemingly harmless craft is exposed for what it is: a water-wolf in sheep's clothing.

The Right Rods and Reels at the Ready
From an angling perspective, Plantan is patently against the premise of "one rod per man." It's limiting. There are far too many situations and species to carry on so restrictively. "Having enough prerigged rods and reels in the canoe is key," said Plantan "So is knowing how and when to use them."

Regardless if he's slipping a fat stream for browns or combating heavier current in pursuit of walleyes and smallmouth bass, Plantan operates with at least two prerigged combos per person. And during a typical, two canoeist tour, his preference is running with five total outfits, two per person and a fifth for "community use."

His selection of lures isn't arbitrary, either. Each is chosen for a specific purpose, addressing precise points in the water column and prevailing piscatorial moods. Each angler needs one lure that'll hit the bottom and another to probe the surface. And the fifth, the so-called community outfit, is geared to run at midrange depths.

Rod one is for chucking topwaters and fueling explosions. If you fish rivers for smallmouth bass, pike or muskies, you need a topwater presentation perpetually at the ready. Plantan throws 'em all year, too, but says they're most effective during the warm water months.

The river sage generally commences with true topwaters, like a Rapala Skitter Pop, a real "noise maker." They're best suited for long casts into pools, and fundamentally, anywhere super-aggressive fish are circulating. 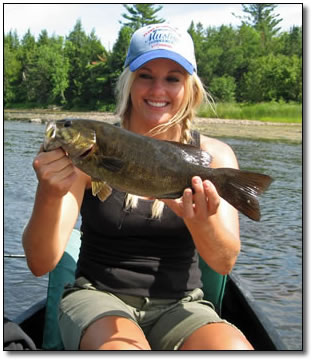 By and large, though, a stickbait - slender, shallow running crankbait - is Plantan's favorite class of body bait for peppering the surface. "They catch both aggressive and inactive fish, even in cold water and during cold fronts. Stickbaits look and act so much like actual river forage that rarely will fish pass on them."

In his humble estimation, the Rapala Original Floater remains the crème de la crème of stickbaits. Despite its relic-status, Plantan goes to the Original before all others. He points to the lure's "versatility" and ability to "fish in so many different ways," including hot and fast for antagonistic suitors and listlessly for sleepier fish.

Generally speaking, too, whether hurling an Original or newfangled Japanese version, which Plantan's known to do, he probes water hurriedly. He slings to the bank, lets the morsel settle, and twitches back toward the canoe. If fish aren't erupting, though, he'll mix in a few subsurface, straight retrieves.

Logjams manufacture another prized location for topwaters. Plantain explained. "I position the canoe directly across from the logjam, lending access to both upstream and downstream targets. Highly aggressive smallmouth bass and trout will lie in ambush at the head of the logjam. But the 'ol 'King of the Pool' - a muskie or giant pike - will normally linger in the downstream pool."

Rod two features a jig. This is Plantan's bottom option, and truthfully, his most multitalented device. And through years of trial and error on untold flowages, he's settled on a few clutch representations.

"First of all, plan on losing a few jigs," Plantan cautioned. "So don't be skimpy on inventory. I carry loads of long-shank, dark colored heads in 1/16th to ¼ ounce weights. And by far and away, 1/8th ounce jigs match the most conditions."

His ace in the hole is Northland's advanced Slurp! Jig Head. It features an extra long shank and uber-wide gap for taming iron-jawed smallmouths. Its signature feature, however, is the "double-barb" BarbWire™ collar that holds plastics in place like raptor talons on a field mouse.

Plantan cloaks his jig with soft plastics. "I've experimented with every color, size, and body shape on the shelves, too, and found that 3 inch brown and orange-brown grub bodies catch more fish in more situations than any other kind." Plantan's picks come from Northland's assortment of Slurpies Swim'n Grubs.

With that said, Plantan also plays around with black, chartreuse, and white, which are proven, multi-species river colors. He suggests that each partner lets fly a different color and style until a preference is established.

Jigs work just about anywhere water moves. Plantan fishes 'em amid runs, against banks, up and down riprap, in pools, and well, basically anywhere it's wet and wild. "Pools are my favorite spots for jig fishing, though," he confessed. "I like to anchor above a riffle and pool, wading into the water if I can, and cast downstream. If physically possible, I'll sneak below the pool and cast back into it. This lets me probe the whole thing from different angles."

Another made to order jig-target is a "good rocky shoreline, one with depth and bigger rocks." To strafe such an area, he casts just upstream of the canoe, tight to shore, and allows the jig and canoe to float downstream, simultaneously, while he slowly takes up line. Plantan contends that the "jig emulates a crayfish or minnow darting among the rocks." To enhance the natural-forage illusion, Plantan employs a clumsy swimming action, bumping and popping the jig in an erratic but not overstated manner.

Another package he often proffers is a soft jerkbait (fluke) coupled with a weightless hook. Front runners are 1/0 and 2/0 Gamakatsu Offset Worm Hooks. If current speed and or depth call for modest weighting, he opts for Northland's weighted Lip-Stick Worm Hooks.

Plantan runs with either a Zoom Fluke or new Smelt Minnow from Northland Fishing Tackle. Both yield the innocent and vulnerable locomotion of a hapless minnow. Stick to lighter colors, too, said Plantan.

The certified river rat spools his jigging outfit with 6- or 10-pound PowerPro, no exceptions. The adaptable superline gives him an advantage no matter what rises from the river. With PowerPro, he usually wins the war against snags as well.

That fifth, shared rod and reel combo is dedicated to midrange sorties. Typically, Plantan's armament of choice is a Rapala Husky Jerk, which both dives and suspends.

Fly-fishing partisans shouldn't feel slighted, however, because equally as often Plantan embarks with a dry-fly for the surface and a second rig fitted with a streamer for the in-betweens.

Nair a stretch of river is safe from the water wolf. The canoe is too well equipped and appointed, its operator expertly schooled. Luckily, though, for the fish's sake, Plantan is a disciple of the rite of release.