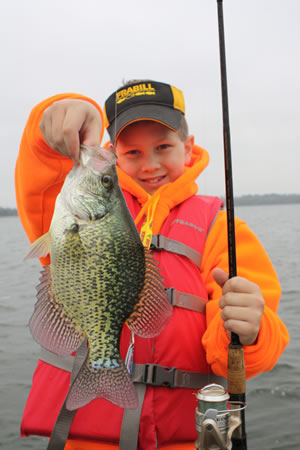 "Slow and steady wins the race." I'm a disciple of the philosophy. In real life, the examples are countless. Consider the marathoner. The guy who paces himself for 26.2 miles is sure to pass the jackrabbit before reaching the tape. Same can be said of investing. Principle plus interest plus time is a proven formula. Speculative get rich quick schemes seldom succeed.

This principle applies to fishing as well. Sometimes, neurotically motoring from spot to spot in whirlwind fashion produces fish - sometimes. More often, though, I adhere to the premise that you can't get bit without a line in the water. Again, the turtle trumps the hare.

Same can be said of the retrieve. The tendency for many anglers, no matter the circumstances, is to burn the bait back to the boat, already envisioning the next cast before the current cast is fully realized. And in no situation is this more glaring than when battling cold water, springtime panfish.

Maybe the reason for all the rush is as basic as pent-up energy from a winter's worth of ice fishing, or perhaps not fishing at all, electing to read about it in a recliner - shameful behavior. Regardless, fishing-feverishly-fast in the spring accomplishes nothing more than burning a bait over the snouts of fish that would have likely accepted something slower, more catchable.

Well, say hello to "dragging" and goodbye to speed fishing. As the name implies, the presentation is "dragged" past the fish, not rocketed like the mechanical rabbit at a dog track. The purpose is to offer a tantalizing, almost mesmerizing morsel to lethargic crappies. And everyone knows they're notoriously stationary and moody in the spring.

Superstar guide Tom Neustrom is a staunch advocate of dragging. Decades on the water has taught him its effectiveness. Doggedness gives him the patience to produce the action, or more appropriately, lack of action.

"It's probably the easiest technique you'll ever use, but honestly, it's one of the hardest to actually execute," said Neustrom recognizing mankind's nature to do things hurriedly. "Cast it out there. Take a deep breath. Set the rod down if you can't help yourself from reeling.

Patience is one of the hardest things for an angler to learn..."

The Rig
So we know crappies are on the radar. (Note that the technique is effective on bluegills, too.) We also understand that patience is required to make it happen. Now it's time to define the rig.

The fundamental rig is something you've definitely thrown before: a sliding or fixed float with a small jig or tube - nothing revolutionary. But, again, it's the manner in which you play your hand that makes the difference.

Depending on the overall depth, Neustrom sets the distance between the bobber and bait anywhere from one to four feet. He explains: "The key is keeping the bait at or above the level the fishing are holding. If it's eight feet deep, crappies will be suspended somewhere in the middle, and probably in the upper half of the water column."

In this scenario, Neustrom sets his depth at two feet works his way down to four, if necessary, based on results. If crappies are in four feet of water, which isn't unusual on a warm spring day, he fixes the float to a foot, maybe 18-inches, splitting the difference.

Back to the action - the "kick-back-and-relax" action. The rig touches down at the tail of a long cast - Neustrom operates as far from the boat as possible to keep from spooking the fish. He lets the bait settle, up to even a minute if he's convinced fish are nearby, just terribly sluggish.

Assuming nothing's disturbed the peaceful bobber, Neustrom turns the first round of the reel in what looks like slow motion. "Don't think of it as cranking, but more like winding. It should be so slow you can actually see the line wind around the spool."

The bobber, under minimal force, tilts on its side, creates a modest wake, and slides back toward its rightful owner. No jerks. No snaps. Not even a pause.

Down below, at the prescribed depth, the jig tracks along on the same linear path and at the same sleepy speed. At first, it's easy to question the lure's potential while creeping along so lifelessly. Trust, though, that beneath the surface micro moves are underway. On a hair-jig, like Northland's new Bug-A-Boo Finesse Jig, the cilia-sensitive marabou feathers throb ever so subtly. On a straight pull, in cold water, that's plenty of animation to get the job done. 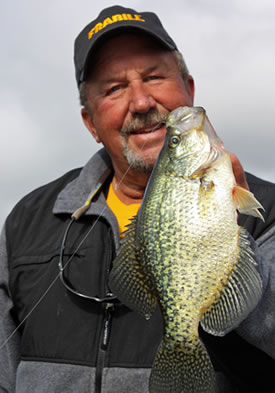 Strike detection is as equally as crucial as bait selection. Sometimes, the bobber plunges and a swift yank of the rod tip finishes things off. But just as often, though, given the reaction time of springtime panfish, the bobber sinks ever so faintly under the light resistance of a papermouth. If it starts to dip, or deviates from its straight course, Neustrom says to calmly tighten the line and set smoothly.

Earlier, I referenced both slip-bobbers and fixed-position bobbers. Depth is what influences the ultimate call in Neustrom's mind. "If I'm only fishing a couple of feet down, a fixed spring float is the way to go. Keep it simple." Any deeper and he prefers the casting-control of a slip-bobber. In deadly dragging mode, that puts the base of the bobber in direct contact with the head of the jig. It casts like a missile, but be watchful so the jig-eye doesn't stick in the shaft, preventing the bait from falling.

It's no question that the years take their toll on one's reaction time, and general athleticism for that matter. But on the flip-side, putting one in the win column for us middle-agers, patience and time go hand in hand. That should make me a world class deadly-dragger in, oh, say, another decade or thereabouts.

Brian "Bro" Brosdahl
Brian “Bro” Brosdahl (Max, Minnesota) is a professional fishing guide and renowned ice fishing expert. For nearly two decades he’s been sharing his insights and innovations with the fishing public. He can be reached at [email protected]
BITS & BITES
Advertise here
Advertise here
Please take a moment to visit our sponsors. Without them we would not be here.