Trout thru the Ice - Just the Basics with Brad Bricco

By Steve Ryan - March 1, 2010
The bend in the rod foretold the tale of the tape. This was not the pull of a walleye or even a pike for that matter. This fish had a purpose, which did not include making an appearance on the topside of the ice. Jenny fought the fish with all the skill of a professional. After a tense ten minute fight, Jenny stood triumphant on the ice with her fish in hand.

Brad Bricco, our fishing guide for the day, stood by with a Cheshire grin. If there was a cannery on the loose, I know who ate it. Bricco gave a nod, knowing full well that he had accomplished his goal for the day. He had put Jenny on her first steelhead thru the ice and she did the rest. Not to rest on her laurels, Jenny quickly iced a beautiful brown trout just minutes later. The action was on. 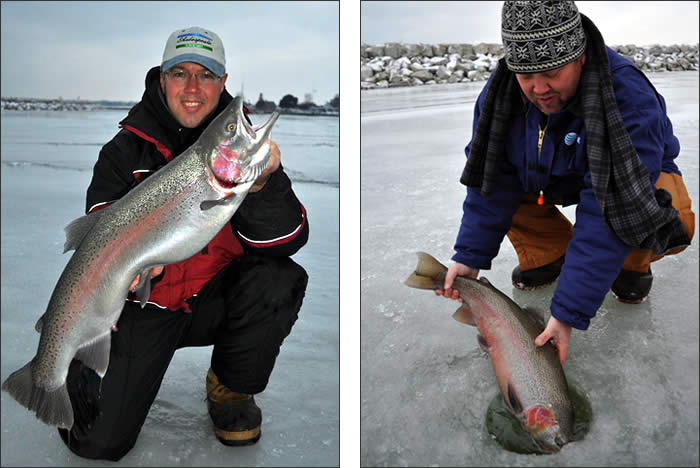 In the realm of ice fishing, landing a steelhead on light tackle is one of those milestone moments. While the gear is similar to that used for walleye, the mind set and all the refinements in tackle and presentation are worlds apart.

Bricco has been fishing steelhead and brown trout all his life. Through the years he has perfected his methods for ice fishing trout both in the harbors and tributary streams of Lake Michigan. On this morning, we were fishing one of the many Wisconsin harbors of Lake Michigan. Even before the sun was above the horizon, Bricco had fired up his 10" auger and quickly drilled all our holes for the day. Holes were grouped with 12-15 holes in each area to be fished. This was done at three different areas of the harbor to allow certain areas to rest and to provide a constant rotation of locations throughout the morning.

Like most fish, trout are affected by noise above the ice. For this reason, all holes are drilled at once, instead of disturbing the area every few hours as the fish move or as different areas of the harbor turn on. Leave the stud bars and hand augers at home when pursuing trout, as the noise from them will drive fish away.

Once holes were drilled, Bricco made use of his full allotment of Automatic Fisherman. Like most fishermen, Bricco started fishing trout thru the ice with traditional tip-ups. While tip-ups will catch their share of fish, they present a problem when targeting line shy trout. Unlike other fish, if a trout feels the least bit of resistance on the line as it swims away
"In the realm of ice fishing, landing a steelhead on light tackle is one of those milestone moments...."
with the bait, it will typically spit the hook. This results in numerous tripped flags with only a few feet of line run out and no fish on the other end. To solve this problem, Kerry Paulson invented a better mouse trap in the form of the Automatic Fisherman. With this device, Bricco estimates that his hooking ratio has gone up from 40-50% on tip-ups to nearly 80-85% with the Automatic Fisherman.

The Automatic Fisherman is best seen in action, but in its simplest form, the device consists of a rod holder, a release arm and a strike trigger. A strong limber rod, like Shakespeare's 30" medium power Ugly Stik ice rod and reel combination, is placed in the rod holder. The tip of the Ugly Stik rod is place over the hole and the bait set at the desired depth. The release arm on the Automatic Fisherman is raised and the rod bent over with the tip guide secured to the triggering pin. The line is run across the strike trigger. When a fish takes the bait, the slightest pressure on the line trips the strike trigger. The rod springs up and sets the hook on the fish. With the rod still in the holder, the fish can run off line under the pressure of the reel's drag until the angler arrives to fight the fish on the rod and reel.

Bricco rigs his rods with 8 pound test line and a size 6 Owner SSW bait hook, baited with a spawn sac consisting of 8-10 trout eggs. The eggs are cured with ProCure's Wizard Egg Cure. The ProCure Wizard Egg Cure has a two-part purpose of preserving the eggs for extended storage and adding scent and color to the eggs. Subtleties in color and scent can make all the difference when trying to outsmart trout.

To spice up baits further, savvy anglers are known to also add items like Jell-O mix, Kool Aide, brown sugar, garlic or other spices to their eggs. Baits are placed 3" to 3' off the bottom in likely areas around the harbor. Since scent is one of the main attractants for trout, spawn sacs are changed every hour to insure a fresh scent trail.

While some anglers still have a whack and stack mentality when it comes to trout and keep everything they catch, Bricco practices catch and release. Apart from a few fish that his clients take home to eat or for the wall, Bricco releases the majority of his trout unharmed. Since steelhead and brown trout have the potential to grow in excess of twenty pounds, it is a special feeling to release a trophy trout with the hopes of seeing it again years down the road. For those anglers looking to get a taste of this exciting form of ice fishing, contact Brad Bricco at (715) 853-3706.