Walleyes Come as No Fluke 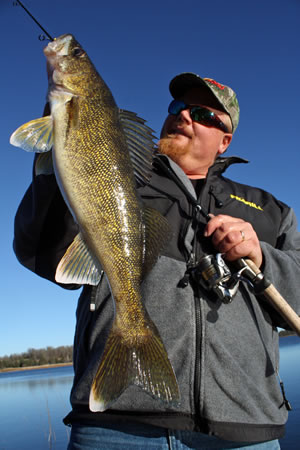 Admittedly, I'm a meat and potatoes sort of guy. I'm eyeing the porterhouse steak on the menu long before the canary food, organic "meals under 500 calories". In fact, I'll take the whole right side of the menu, please. This instinctive weakness for hearty meat translates to my walleye fishing as well. Nine out of ten times I'm elbowing my way to the biggest minnow, not thinking much about soft plastic alternatives.

Give me minnows, or give me death…or perhaps something less dramatic, but along those lines.

With that said, I mean no disrespect to guys who put their trust in plastics, sometimes choosing them over live minnows, leeches, and crawlers. Professional walleye angler and educator Mark Courts is one of those guys I respect enough to cut some slack. When it comes to walleyes on plastics, he's one of the savviest on the FLW Walleye Tour. And to give soft plastic its day in court, I questioned Courts…pun intended.

"Walleyes crush them," began the Harris, Minn. resident and native. "When a walleye eats a plastic, it's game over. I'm digging in there with pliers to pull the hook out of the roof of their mouths."

A certified proponent of live bait, too, Courts knows that plastic have their time and place. And without hesitation, he named springtime fishing on rivers and reservoirs as the foremost situations for busting out the plastics. Courts explained: "Usually, rivers run darker than lakes in the spring. Because of the turbidity, you need to offer them a big target, something with major profile. Plastics fill that role."

Any broad generalizations about soft plastics end here. Courts is particular about his shapes and sizes. As far as spring walleyes go, nothing does a better job of imitating natural forage (baitfish) than a fluke, sometimes referred to as "soft jerkbait." Typical to soft plastics, they come in more colors and variations than jellybeans at the candy counter. I've seen them as long as a ruler for oceangoing stripers and as miniscule as a blue moon in a box of Lucky Charms to imitate young-of-the-year baitfish.

Relevant to walleyes, Courts' preferred size falls somewhere in the middle. This is a direct reflection of what foodstuffs are being preyed upon. Typically, you're dealing with some variety of shiner, shad, dace or sucker from an inch to five inches in length. To no great surprise, the marketplace bares numerous makes and models in those sizes and shapes.

So recognize the general shape and size of the baitfish and you're half way there. The other component, which Courts said is equally as important, is finding "the right body to jig ratio for the current conditions at hand." Essentially, you want to hitch the jig and plastic to create the most natural presentation possible.

"With too heavy a jig it'll lock in the bottom," said Courts. "Too light, and it'll tumble downstream and never make contact with the bottom." In a perfect world, Courts' properly paired combo "tics the bottom every six inches to a foot." Now that sounds more like the true behavior of a live, river running minnow...

In order to achieve equilibrium given a wide range of current speeds and depths, it's only logical to tote an array of jig sizes. And Courts does. "I'll throw jigs as light as 3/32-ounce and go all the way up to 3/8 ounce if the conditions call for it." Again, the goal is to keep contact with the bottom without becoming part of it.

A guy who competes professionally on the bass side, too, Courts is super particular about jig styles. "It must have an extra long shank for reaching back into the plastic body," he stated leaving little margin for error. "A wide gap is necessary as well. The more hook point exposed the better for sticking walleyes in dark and fast moving water. Small hooks are easily missed."

Last but not least, Courts' jigs are required to keep a solid grip on the plastic. His top performer is the Northland Slurp! Jig Head. "A double-barb, BarbWire™ collar holds plastics better than anything I've ever fished. They hang-on for cast after cast and walleye after walleye." Slurp! Jig Heads also feature the long-shank and wide-gap that Courts demands. 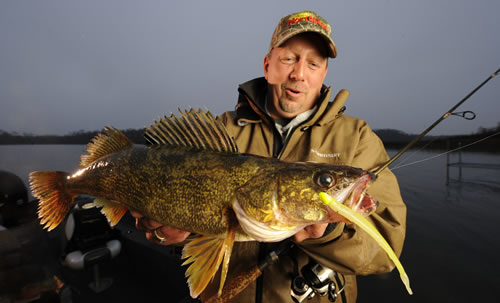 Maintaining holy matrimony, Courts couples his jig with a soft jerkbait that was designed to wed a Slurp! Jig Head. "Can't get a better match than the Slurpies Smelt Minnow. The profile is perfect. The material is supple yet durable. And I have eight unique colors to choose from." Additionally, the Slurpies Smelt Minnow is available in both 3- and 4-inch sizes, yielding even more match-the-hatch flexibility.

Rigged and ready for deployment, Courts discusses specific fishing situations where the jig and jerkbait tandem is especially effective. "After the spawn, walleyes, especially big fish, settle into current seams. A number of structures form seams, too. Wingdams are a good example. Shoreline brush and rocky points and fingers also produce seams that hold walleyes.

Best of all, most seams are visible on the surface." Courts says to watch closely for speed changes on the surface, either fast to slow, or slow to slack or even reversing - an eddy. It's all about fishing those edges, or transitions.

Wide berthing river bends are worth a look, too. Current sweeps hurriedly along the outside bend while the shallower inside is slacker and more conducive to post-spawn feeding activities. Keep this information in your back pocket in case the typical current seams aren't holding fish.

Once a spot's been identified, Courts anchors or "slips" downstream across from the target. Slipping is a method of boat-control in current whereby the operator inches ever so slowly downstream while running the motor - gas or electric - upstream to manage speed. Yes, it's effective, but it also takes skillful navigation. Anchoring is the easier choice and lets you focus more on fishing.

Anchored or slipping, Courts casts upstream of ground zero at a 45-degree angle and "walks" the jig and fluke downstream. He holds the rod at the 9- to 11 o'clock position and maintains a taut line to feel every bump of the riverbed and hopeful wallop of a walleye.

This wicked jig and plastic combo isn't limited to current-going walleyes, either. I'll often throw it in flooded backwater areas. Later in the summer, on natural lakes, jigs and flukes can be very productive along deep weedlines for walleyes and largemouth bass. And if you're into smallmouth bass fishing, there might not be a better one-two punch out there.

Okay, Mr. Courts, I get it. I'll save some space in the tackle box for jigs and plastics. But don't try talking me into dumping the minnows. I consider them comfort food.

Brian "Bro" Brosdahl
Brian “Bro” Brosdahl (Max, Minnesota) is a professional fishing guide and renowned ice fishing expert. For nearly two decades he’s been sharing his insights and innovations with the fishing public. He can be reached at [email protected]
BITS & BITES
Advertise here
Advertise here
Please take a moment to visit our sponsors. Without them we would not be here.