Get Ready For The Best Ice-Fishing of the Season! 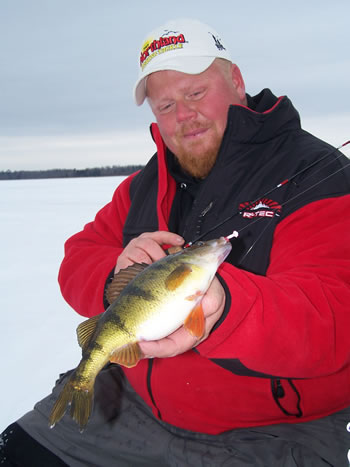 My favorite time of the year for ice-fishing is getting closer all the time. While I really enjoy early ice and its potential for fast fishing, there's just something I enjoy more about the final three or four weeks of ice-fishing.

Maybe it's the longer days, which mean you can fish later in the day with plenty of light.

Maybe, it's the more moderate temperatures. You can fish comfortably this time of year with less clothing.

Maybe it's the knowledge that the ice-fishing is winding down for the year and you're just enjoying it more because you know it's not going to be here much longer.

Nope, none of the above.

While all of those are good considerations, the reason I like ice-fishing late in the season is because the action can be so good. I've had some really memorable ice-fishing trips in mid to late March in previous years, and I intend to do the same this year. From Devils Lake in North Dakota to Waubay in South Dakota, from Leech and Winnie and Upper Red in Minnesota to northeast Wisconsin to the Iowa Great Lakes, for as long as the ice is safe, this is a great time to go ice-fishing.

Some states close the ice-fishing to walleyes and northerns and other species this time of year. Be sure you know the rules. In many areas perch and crappies and bluegills will be the pursued species. Keep moving until you find them. If you fish a hole for five minutes and don't see activity on the sonar, go to another hole.

If you see activity but the fish won't eat, try something else. This time of year, if you keep trying different lures, colors, sizes, and actions, you'll eventually find something that will work.

To increase your chances to get bit, have some small Buck-Shot Rattle Spoons and some Bro-Bugs. Get some of the new Gulp! Alive Minnow Heads to add to the spoons.

Pay close attention to your sonar. My Humminbird 55 ice sonar has been the difference between a few fish and lots of fish many times in the past couple of years. It does an outstanding job of showing the fish and their activity levels.

Lastly, kneeling in slush next to an ice hole can be uncomfortable. I wear Cabela's Guidewear to keep dry: It's the best there is. While there are some ice-anglers that like the first ice bite, I find it hard to beat late ice. Now is the time for you to get on the ice and figure out for yourself what ice-fishing season is your favorite.