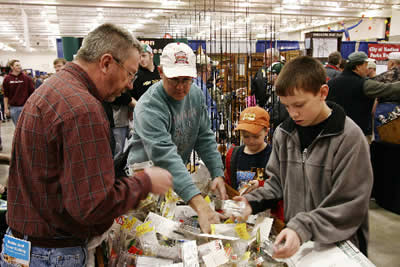 The Madison Fishing Expo (MFE) will be celebrating its 25th year February 26th through the 28th with one of its largest shows ever with more speakers than ever before. Chuck Rolfsmeyer, President of the show, said they have come a long way in their 25-years.

"It's hard to believe that this show has grown to what it is from where it started," he said. "When this started out we were a bunch of guys who wanted to promote the sport of fishing but had no idea how to run a sport show. Now, it's one of the largest all-fishing shows in the country."

To celebrate the anniversary of the show, MFE will be allowing all current and retired military, and their immediate family, into the show free of charge. According to MFE, it's one small way they can help honor the armed forces and all they do for the country.

Steve Hauge, board member of MFE, said it is their way to honor the men and women of our military.

"This really hits close to home too because so many units from the area are returning from deployment," he said. "A very large portion of people that attend our show have served in one way or another and this is just one way we can honor them."

Hauge added that the show decided to also allow immediate family into the show.

"We realize that loved ones also make a tremendous sacrifice while their husbands, wives and others are off serving their country so we decided to let them in for free too."Military personnel should where their uniform, or bring in military ID or DD214 Form, for free entry.

The all-volunteer, nonprofit show, has donated more than $600,000 to date to various fishing projects in Wisconsin as well as a yearly scholarship to Stevens Point.

"To celebrate the anniversary of the show, MFE will be allowing all current and retired military, and their immediate family, into the show free of charge."
Some of the projects include: Getting kids involved in fishing has always been a main goal for MFE, which is one of the reasons the show lets kids that are 12 and under in for free.

"Kids are the future of our sport," Rolfsmeyer said. "Some day, these kids are going to be lawmakers or wardens or senators. They will end up affecting the sport of fishing. We figure if we can get them involved in fishing they will appreciate it, and want to protect it in the future."

For their 25h anniversary, the MFE will have more events and speakers than ever before as well as free MFE fishing towels for a few hundred people each day of the show. There will also be a free drawing compliments of the MFE for a Lund boat package valued at over $12,000.