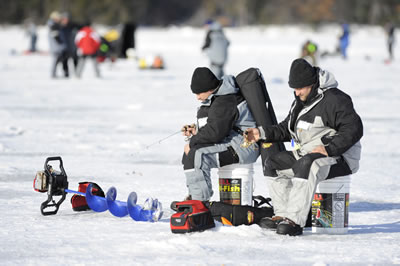 Reluctantly biting fish and the need for well-tuned electronics…everywhere lakes freeze, these two themes figure largely into the schemes of ice anglers. So it was during the 2009 North American Ice Fishing Championship.

Eighty-four of North America's finest ice angling teams recently converged on Boom Lake, Wisconsin to test their skills against both finicky fish and extreme fishing pressure. At stake, $25,000 cash and the right to be called Ice Fishing Champions.

Over the course of the 2009 NAIFC tournament season, teams had fished seven regional events which ultimately determined qualifiers for the big show. Returning for another run at the title were such notable teams as Boshold-Horn, Young-Boedeker, and Pikulski-Gilbert, who had won previous championships. As it turned out, each would play a prominent role in the final standings.

Boom Lake is a 2,200 acre flowage on the Wisconsin River harboring a maximum depth of just over 30-feet. Although the lake's topography contains vast areas of uniform depth, anglers often target weedflats, rock edges and manmade sunken cribs when hunting bluegills and black crappies-target species of NAIFC anglers. Each of the two tournament days (Saturday, December 19 and Sunday, December 20) teams were allowed to weigh up to eight crappies and eight sunfish. For most, this proved a daunting task, as no one weighed 16 fish both days.

On day one, it was literally a foot race to one or two key fishing areas. First teams out of the shoot set up and began drilling in patterns that would allow for at least limited mobility within the crowd of competitors. At the weigh-in, Michigan veterans Mike Boedeker and Dave Young arrived with thirteen fish weighing 4.94-pounds, including a 1.15-pound crappie. The weight was enough to hold a slim lead over aces Jacek Gawlinski and "Zibi" Wojcik, who put together one of the only two daily limits. In the mix were the illustrious "Ice Trollers"- the team of Joe Pikulski and Myron Gilbert, who had won the event in 2008. Landing the only other limit of the day was Frabill sponsored Team Prowler-Tony Boshold and Bob Horn, weighing a 4.5-pound bucket of panfish for a fourth place position.

While the majority of teams set up shop in the community hole, coaxing every little bite with the greatest of concentration, there were a few, such as Pikulski and Gilbert, who drilled loads of holes in search of roaming fish. Key areas included subtle outer rims of depressions in the basin, most of them dropping no more than a few feet below the surrounding terrain. Another active team was newcomers Roy Mutter and Myron Gilbert, Jr. This duo targeted crappies on 26 to 30 foot edges in the middle of the lake, finishing day one with eight slabs and a top ten position.

Beyond the ultra-finicky panfish bite (nearly a third of the teams drew a day one blank), one recurrent theme revolved, literally, around flasher dials. With scores of teams all fishing within earshot, transducer signals from competing flashers rendered many units unreadable. Several anglers noted that they were able to minimize on-screen interference by dropping their transducer as deep as possible, beneath the "noise." Most, however, quickly realized that certain flasher units were better at dealing with the interference.

"It was pretty obvious that the power of the MarCum units were taking most of the other flashers out of the game," noted Joe Pikulski. "A lot of guys just couldn't tune out all the clutter on their screen, and couldn't read their jig or the fish. It was combat fishing." Fortunately for anglers such as Pikulski, as well as the contending teams of Young-Boedeker and Boshold-Horn, their MarCum LX-5 tuned out the interference, keeping visible their jig and the fish. "This event was a real eye-opener for some of the teams, as far as electronics go," stated Boshold. "We all saw that the guys using MarCums had an advantage."

Another distinct edge available to anglers was use of a select new jig, called a Hexi-Fly, designed and shaped to gather and return the strongest sonar signal possible. Touted as a "flasher friendly" ice jig, the Hexi-Fly, offered by Northland Fishing Tackle, allows anglers to dial down their flasher's gain setting, which reduces on-screen clutter and shows only the jig and fish. The unique shape and action of this jig, frequently touted by ice fishing sage Brian "Bro" Brosdahl, holds major positive implications for future NAIFC events. Stay tuned.

Meanwhile, among the various teams operating within the confines of the crowd were presentation artists Dave Young and Mike Boedeker. "We fished the 24 to 28-foot edges of two humps we found last year," reported Young. "Even with all the other anglers around, Mike and I were still able to tune out interference on our MarCums and continue reading our jigs. That was a huge factor."

While crowding became a major burden for most anglers, Young used his finely honed tightlining skills to turn it into an advantage. "The key for me was to fish a little spoon-type jig that represents a perch eye. It's basically a Northland Eye-Dropper jig - a small Colorado blade with a big eyeball painted on it. I lightly hooked on a single wax worm, and gave it a squeeze to get the good juices to ooze out. I fished this jig 2 to 6-inches off bottom for the bluegills. They were really spooky. On day two, I had just one bite, but I made it count. Mike got eight. That's why it's nice to have a partner who can fish."

Though their second day efforts proved noble, their final weight fell just five one-thousandths of an ounce short of the title. For the second straight year, Young and Boedeker settled for a hard-fought second place finish.

Conversely, Pikulski and Gilbert took a more active approach. "We started in a deepwater spot we found the year before, and caught eleven crappies and a few bluegills," reported Pikulski. "Later, we kind of got pushed off, and started 'trolling.' Luckily, on day two we pulled five fish off our first spot." The Ice Trollers notched a respectable third place finish, weighting 6.75-pounds total.

Likewise Roy Mutter and Myron Gilbert Jr. were out ripping holes as if their quarry were liquid gold. "One guy would drill, while the other would check the flasher for crappies," said Mutter. "When we'd mark fish, we'd drop our Fiskas jigs to just above the level of the crappies, which were a few feet off bottom. We'd just keep pounding the jig to get the fish to chase." Their efforts paid off-ten more fish for a two-day total of 7.27-pounds and ultimately, the North American Ice Fishing Championship.

As the event concluded, two key lessons emerged. One, tough conditions necessitate superior concentration on presentation to maximize every bite. Second, all top competitors rely exclusively on a premium brand of electronics, which continue to perform even in extreme conditions. It's a story likely to repeat itself in many respects, as these elite anglers gather again for the 2010 North American Ice Fishing Circuit.