When you spend your winters guiding on a huge lake like Central Minnesota's Mille Lacs, doing all the things it takes to find biting fish can test your resolve. There's only one way to the fish - drilling lots and lots of holes. My guides and I sometimes spend entire days doing nothing but searching-one guy drills, another dude scans with an underwater camera. Often, we'll grind out three or four hundred holes in the space of a 9 hour day. It isn't always pretty, and more often than not, the best way to find fish isn't the easiest way. But man does it pay off. We can usually stay well ahead of the crowds, keeping big schools of untouched fish to ourselves for days at a time. 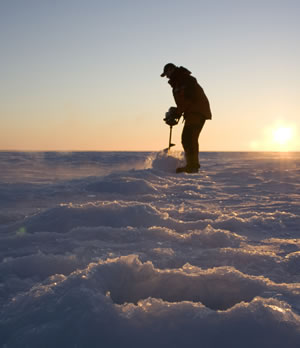 While most of our time goes toward the pursuit of walleyes and perch, the things I'm going to tell you apply to pretty much any fish swimming below the ice.

I mentioned the "pay off," and wanted to share a little snapshot from last winter's fishing. During a particular 9-day stretch in January, I'd been quietly picking away at a huge flock of walleyes on a spacious deepwater hump. The fish were there, but every day was different. The fish made little daily movements around and over the hump, based mostly on baitfish location, light level, and more than likely, fishing pressure exerted by our own group.

Fish like walleyes and perch move in the winter-in fact, they move a lot. Thing is, though, they're not traveling from one end of the lake to the other. Still, on big water like Mille Lacs, daily movements can certainly span several hundred yards to perhaps a mile. And of course, schools move to different depths and locales several times within a 24-hour period.

So we'd begin each day picking up where we'd left off the previous day. My guides and I would drill in opposite directions, each zigzagging up and down from the deep edge, to the drop off, to well up on the shallow flat. After banging out 20 to 30 holes in one direction, which would take about 10-minutes, we'd go back, grab rods and begin quickly fishing through each hole. We jigged Northland Buck-Shot Rattle Spoons for no more than 5 minutes per hole before moving on down the "trolling path." If we were working an individual walleye on our flasher, we might stay a few extra minutes to trigger that fish. Still, having laid down entire path of holes, it was so much more efficient to keep moving and search for biters.

So if we flashed a fish in one hole, but couldn't trigger it, we made a little sign in the snow next to the hole, and return later to hopefully catch it. Really, this is as close to trolling on ice as it gets, and you'd better believe that it's every bit as effective for contacting active fish-especially during those otherwise tough midday hours.

Having iced close to 40 fish the previous day, I approached the spot and saw a group of shelters stationed off the tip of the hump. As I talked to these anglers about their lack of success, it was interesting to note their six augers, lying unused on the ice. Obviously, the school had moved, but I figured they'd still be close. The guys told me how they'd drilled "a bunch of holes" all over, but the fish just weren't here.

Moving a little ways down the break-maybe 150 yards-I popped 20 more holes. On my second drop, I connected with a 29-inch walleye. With a peek over my shoulder, I slipped the fish back and bailed, saving the spot for later that afternoon. Still, I couldn't help thinking about that group of fishermen-if only they'd kept drilling and not given up.

Which just goes to illustrate an important point regarding ice trolling: while it certainly is a systematic game, more often than not, the only way to find fish is to just keep drilling and scanning with electronics. My motto is, 'enough holes are never enough until fish are found.'

The ice trolling system begins with my GPS. Following contours on my LakeMaster mapping software, I lay down a "trolling route" in the snow first-running the edge with a snow machine or on foot, tracing out the boundaries of the structure. Then, I simply go back through, following my tracks, snatch the StrikeMaster, and cut more holes.

Most often, when drilling-out a new piece of structure, a partner is following behind with a MarCum VS380 underwater camera. It's the other half of my fish-finding gameplan. Anglers like cameras because they offer a n entertaining way to watch fish react to lures. But the truth is, the camera is even more valuable as a fish-finding tool. The VS380 is compact and lightweight, making it easy to carry on the fly. The picture on the 380 is incredibly clear, too, showing an amazing amount of detail-all the way down to individual mayfly larva, even zooplankton. Really, it's like having HD-TV on ice.

The viewing angler who drops the lens into each new hole sees the big picture-bottom terrain, the presence or lack of baitfish, walleye size, numbers and their position relative to bottom. Even their activity level can be gauged simply by observing fin movement and distance above bottom (active fish are usually one or more feet above the substrate and their pectoral fins fan a little more quickly). When the viewer spots a fish, he'll trace certain symbols on the snow for reference. To keep other anglers from discovering our fish, we've devised our own code-for instance we might trace a "10-4" for walleye, "50-0" for big walleye, or "1-1" for two walleyes. The goal is to fine-tune our ice trolling program as much as possible-again, it's a system, no different than a strategic open water trolling approach-and not just a bunch of holes drilled to impress people with our endurance.

Soon, we begin fishing back through each hole in sequence. We'll leapfrog over one another, again, rarely fishing any one hole for more than 5-minutes. Once we reach the end of the trolling path, it's time to start the drilling/camera viewing process again. Cut and view thirty holes, then fish. After a few hours (usually less), it will become pretty apparent whether the active fish are off the deep edge, directly on the drop, or on top of the flat.

Some days, rather than using portable shelters, we simply set a large pop-up style house, such as a Frabill Headquarters, which serves as basecamp. From here, a bunch of anglers can formulate gameplans, eat lunch, and just get a blast of warm air. Really, though, if you're outfitted with something similar to my Snosuit, you'll never even notice the cold.

It's sort of funny, but one of the biggest objections to ice trolling comes from anglers who say that all you need are a few wisely drilled holes placed in key spots at peak times. This is true if you're setting up for an hour or so of fishing at dawn or dusk. But even then, I'd still rather have the luxury of working through an entire network of 30 to 100 holes along a particular structure.

What I like to tell people is-and this is absolutely true-once you start ice trolling, systematically exploring entire structural complexes with an auger and a camera, you'll start catching a lot of walleyes and other species during all the supposed 'off-peak' hours during the middle of the day. Each new hole holds the hope of a big fish-and if you ask me, that's about as good as it gets.

Tony Roach
Tony Roach grew up in northern Minnesota where he has been a fishing professional for over a decade. He has guided on a wide variety of lakes including Mille Lacs, Winnibigoshish, Lake of the Woods, and many more! Roach, a professional walleye angler competes in tournaments across the Midwest. Tony offers a vast knowledge of multi-species fishing, on a wide variety of waters.
BITS & BITES
Advertise here
Advertise here
Please take a moment to visit our sponsors. Without them we would not be here.