Up above, I tiptoe across the frozen shallows maintaining a low profile. Stealth is a big part of the game. Down below, however, it's more like lions in the Coliseum tearing and tossing-down everything with blood running through its veins. That's what it's like in early winter when northern pike slash through the shallows with hearty appetites and an equal amount of recklessness. 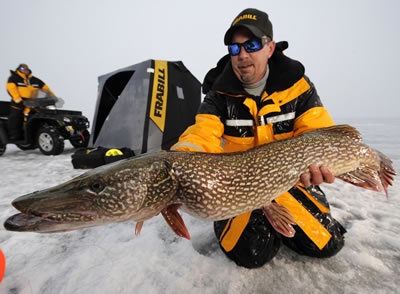 These apex predators spent most of late autumn roaming the basin, tracking along offshore humps and deeper secondary breaks. With the flip of a switch, though, they head straight for the shallows - 4 to 12 feet of water - when the surface water solidifies. And there's no secret to the gravitational pull. It's about gorging on the bounty of available forage.

Panfish are standard fare. Bluegills, crappies, and perch are already making use of whatever green weeds are left. There, they find food, and, allegedly, sanctuary from threats. Pike disrupt the peace, however, ferreting through cuts and openings, as well as cruising along the edge picking off the careless. Ultimately, panfish only find safety in numbers, some brethren sacrificed for the whole.

On certain lakes and reservoirs the summons comes in the form of whitefish and or tullibee (ciscoes). Their reproductive ritual begins in the late fall and finalizes sometime after first ice. Perfect timing for pike.

So the foodstuffs are up in the shallows, but located randomly. Weeds have already been noted. But make sure your focusing on the greenest and thickest vegetation available. That could mean a lush garden grove. In other situations it's a thick spot amongst an acre of spindly brown weeds. The most reliable weeds are found in shallow bays that are adjacent to the main lake.

River mouths are another natural draw. Pike are suckers for moving water. Suckers, the actual fleshy baitfish, are common there. Take heed that ice quality on and around river mouths is several notches thinner than what the main lake offers.

Although pike activity is at its seasonal peak, there are good, better, and best times to fish. Morning and evening are no-brainers. With that said, historically, I've nailed the majority of my larger fish - 10-pounds plus - during mid to late morning, say from 8 to 11 am. The last hour and a half of the day is next in importance, but a distant second.

Weather is a factor as well. Invariably, I pound more pike on cloudy days than those marked with sunshine. Pike roam more freely. They loosen their range and don't stick as tightly to cover. In response, I spread the field, which means running Frabill tip-ups while maintaining a rigorous jigging schedule. Depending on the state's legal allotment of lines and how many partners I'm sharing the ice with, it can be half-dozen tip-ups sprinkled about a 200 foot radius.

The only thing that bests cloud cover is cloud cover on the leading edge of imminent precipitation, either snow or one of those bothersome early winter mists. Pike go bonkers before a front.

Now about that tiptoeing and black-ops stealth I mentioned earlier… Yes, early winter pike are ferocious feeders. That's to your advantage. But on the flipside, you're operating in shallow water with only a thin veil of early ice. The ice, in fact, is often transparent. To the fish, you're silhouette is as apparent as the old tire and boulder on the bottom you just walked over. Complicating matters, my preferred technique positions me directly over their heads.

Jigging really scratches their itch, though. When pike are on the move an energetic jig is irresistible.

Pre-drilling puts the angler in position to operate stealthily. Drill your holes 15 minutes to a half hour before show time. To really take advantage of the morning bite, pre-drill in the darkness, before pike take their morning swim. 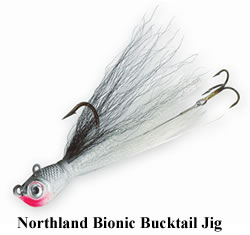 Finally, it's fishing time. Lurched over a hole, I ready the rig, which was tied-up the night before. There's no finer opening act than an oversized jig fitted with a live sucker minnow, either. My preference is the Bionic Bucktail Jig from Northland Fishing Tackle. Hand-tied with genuine bucktail, the Bionic Bucktail creates a full-figured and vibrant target. In clear water, I opt for White Cisco, as it mimics most native baitfish. In darker conditions, Yellow Perch is a better choice.

Next comes a 4-inch sucker minnows or chub - they are the ideal length and shape for jigging pike. Lip-hook the minnow with the forged single hook. The rear of the jig features a "sting'r" hook, a treble tethered by teeth-resistant steel. Don't stick the treble in the bait's posterior. It's a common practice, but I've stung more pike with it floating freely alongside the minnow. My theory is that the lightest part of the rig - the sting'r in this case - is the first to find a pike's jaw.

The action is more of a swimming and dumbed-down-darting than classic jigging. Don't snap it. Instead, smoothly but confidently pump the jig in 1 to 2-foot motions. I'll operate from top to bottom in clear conditions. Pike aren't bashful about rising to the underside of the ice. In darker water, I've found most fish operate within 4-feet of the bottom.

Not just any old rod will do, either. Put away the panfish stuff. Remember, you're tangling with muscle-bound fish in a relatively small space. It's fist to fin combat.

A guiding buddy of mine and northern pike nemesis, Paul Nelson, developed a pike-specific rod for Frabill. It's quite the fish tamer. Found in the Ice Hunter series, the 32-inch, medium-heavy stick yields the perfect balance of a firm but playful tip with the backbone of a brontosaurus.

For battling in tight-quarters I recommend spooling with a superline, not monofilament or fluorocarbon. You'll appreciate the toughness and resistance to shredding. I look forward to testing the new Performance Fuse from Sufix.

It takes angler skill to bring down fish of this magnitude as well. Expect violent runs and very dynamic directional changes. To win, you must wear the fish out, no horsing it in. Pulling back too hard nearly insures that the jig will tear free. Maintain pressure, letting the drag do what it's designed to do. As a failsafe, I back-reel with the drag-system covering my behind. If the fish runs exceptionally fast, lock down on the handle and the drag takes over - beautiful 2-part harmony.

Icing a submarine-sized pike in the shallows isn't like walking and chewing gum. Plan that the fish will appear horizontally - wide head in the hole and numerous inches of body tucked beneath ice. Keep the rod loaded, applying constant pressure while turning the fish. Obviously, it's nice having a "net man". As the snout rises, prepare for the snatch and grab. Know that you're going to get wet. In fact, to reduce the risk of breaking off, I take the fish while it's vertical, its movement restricted in the hole. As a bonus, the fish is less likely to flip-out and injure itself.

Once on the ice, it's a quick photo - titans only - and the head goes back from where it came. Hold and pump the fish a few times until it's self-powered. High-five your partner, or do that faddish knocking fists move, and it's on to another screensaver quality pike.