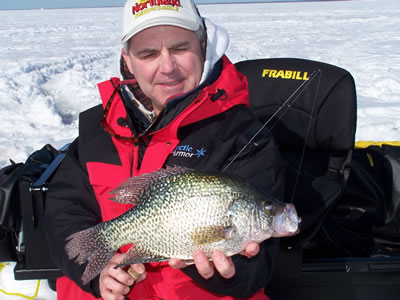 Fish under the ice, just like fish in open water, sometimes get finicky. It seems that they just don't want to open their mouths to take the bait we have down there. Here are some ideas for getting fish to eat your bait when they don't seem to want to.

If you try different jigging actions and nothing works, it's time for more drastic measures. If they were looking at the spoon, that's at least an indication they're interested. Try a similar spoon in a different color or size. Often times when the fish are being selective, a different color or size will get them to eat. Usually it works best to go to a smaller size for finicky fish.

If that doesn't work, a complete overhaul is called for. Maybe a plain hook and splitshot under a slip-bobber will get the job done. This is a pretty bare-bones presentation, and sometimes that's what it takes to get the fish to eat.

When fish are being selective be sure to keep the bait above them, but not too far above. Modern ice-fishing sonar units do an outstanding job of enabling us to keep the bait right where we want it. The target separation of the new Humminbird ICE 55 will allow an angler to know exactly where the bait is in relation to the targeted fish. When the fish are aggressive, they'll come up several feet to take a bait. But when they're being choosy, they often won't want to move too far to take a bait. When you see a fish on the sonar, slowly get the bait to the fish's level. You don't want the bait to fall quickly right on the fish, as that will oftentimes spook it. Jiggle the bait a little above the fish: If it doesn't go up to take it, lower it slowly just a couple of inches.

Line visibility is another important consideration. When the fish are selective, a line that's hard for them to see will usually be most productive. Trilene 100% fluorocarbon is invisible underwater and would be an outstanding choice for fish that are playing hard-to-get.

Like it or not, we sometimes have to deal with finicky fish. If you keep the above ideas in mind, you will be able to deal with them more effectively.