By Steve Huber - July 1, 1999
There are amazing opportunities to be had in the Rhinelander area on small lakes, and I don’t want you to think for a moment that small lakes equal small fish. Quite the contrary, some of the largest fish that I have caught and seen have been on small bodies of water. There always seems to be a thought connection....big water, big fish and to a certain extent, that’s true. There may be a larger population of trophy muskies on lakes like Tomahawk, Vieux Desert, Star etc., but I briefly had on a musky that was in the mid-50 inch class and this was on a lake that is not even 70 acres!! I’ve caught many muskies in the 40-48 inch range on “small water". They may not be fifty pounders but on light tackle, they sure are fun!!!

Something else to think about is the aesthetic value of small water. I routinely guide on many small lakes around Rhinelander and I’m not assaulted by jet skis, water skiers and power boaters. Usually, I’ll have the lake to myself, no more picking a number to drift a weed bed or rock point. I’ve seen deer swimming, had loons chase my lure and been given numerous dirty looks by beavers and muskrats. These are things you usually don’t see on big water.

Last summer, I was on a local lake, pre-fishing for a guide job the next day. It was early July and the tourist season was in full swing. The lake was deserted and calm as glass. I was throwing a 3/8 ounce black single blade spinnerbait into 2-3 feet of water, checking to see “who" (or what) was home. This particular area has reeds from the shore out to about 3 to 4 feet and cabbage weeds from the four foot contour out to about 12 feet where the bottom dropped off sharply. In a distance of about 200 feet, I had several strikes from either a pike or a bass, and one musky that struck about 15 feet from the boat. After four jumps, two trips around the boat (getting trolling motor up, raising the outboard) and generally having a one man Chinese fire drill in the boat, I slid a 36 pound musky over the gunnel. I admired the fish briefly and was fortunate enough to have someone on shore agree to snap a picture. She was released unharmed. This was done on a 5 ½ foot bass rod, twenty pound test mono and no leader. Talk about a THRILL!!!! 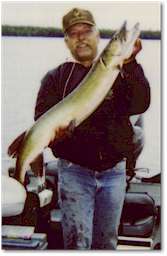 A couple of neat things about the above mentioned story is that the person on shore had no idea there was even muskies in the lake and there was no one else on the water. Two days later, a 43 inch, 23 pound muskie briefly visited the inside of my boat, another quality, “small lake" fish.

One nice thing about small lakes is that I don’t think that the fish are as lure conditioned as the more heavily pounded, more popular “Trophy" waters in this area. They seem to be a little more eager to chase and strike smaller, easier to throw baits and that translates to fishing more effectively for longer periods of time. Another benefit of throwing “small lures" is that you’ll never quite know for sure exactly what’s hitting your lure. In some of the lakes I fish, you might get hammered by a musky, it could be a northern pike or even a good sized bass. Oh, yeah, hurt me, give me a smorgasbord!! You also will not need (under normal conditions) a huge selection of lures. A couple bucktails, two twitch baits in the 7-9 inch range (perch and sucker color) and a top water bait or two is all you’ll need for a productive day. These lakes also have a shorter “learning curve" as there is less running from spot to spot and the hot spots are much closer together and easier to find. Often too, these small lakes can be fished easily from a small, cartopper boat or canoe. These lakes are friendlier to small boat owners than are some of the large, windswept “trophy" lakes. Consider trying a “small lake" this season, it could pay off “BIG".

Steve Huber
Steve Huber, an avid angler with over 35 years of experience (man, he's old) is one of the few multi-species guides in the Rhinelander area. He's been operating G & S Guide Service for 8 years now and loves to fish for Muskies, Northern Pike, Largemouth/Smallmouth Bass and the occasional Walleye (in no particular order). A person who loves to see others succeed, he's an educator while on the water and when he's not teaching you something, he'll regale you with tales of adventures and mis-adventures gleaned from his years on the water. If you liked this article, you can check out Steve's web site at http://www.herefishyfishy.com.
BITS & BITES
Advertise here