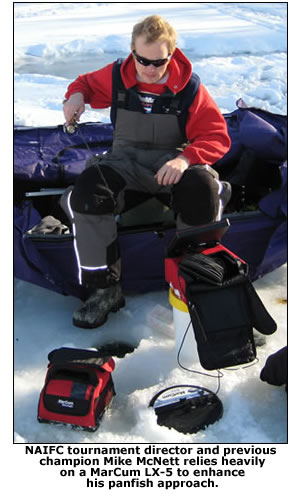 The North American Ice Fishing Championship (NAIFC) team of Captains Joe Pikulski and Myron Gilbert are on to something. Last year, the dynamic Michigan duo—both Great Lakes charter boat captains in the “off season”—took home their fourth NAIFC Team of the Year title, in nearly as many winters. Helping cement their win, the boys took two 3rd place finishes, a 5th, and various other top tens. In 2008, they dominated the highly competitive field, notching wins at Wamplers Lake, Michigan, as well as the NAIFC Championship at Boom Lake, Wisconsin.

To say that Joe and Myron have mastered the art of icing big panfish is putting it mildly. The reality, of course, is that Joe and Myron just plain work harder, drill more holes and fish with greater concentration than most of their competitors. Indeed, they’ve become known as the “Ice Trollers,” a testament to their combined moxie with an ice auger and their MarCum electronics. They simply cut more holes to find and stay on big panfish better than anyone else on the ice.

Still, more often than not, given the skill level of their competitors, sooner or later, a bulk of the tournament field will eventually stumble into the same schools of fish. This is when the boys get serious about the business of triggering pressured panfish. Perhaps it’s a result of the team’s success in the Great Lakes trolling game—a pursuit that demands ultimate precision and attention to every minor detail. As the boys will tell you, while downrigging for king salmon, overlooking even the slightest detail can spell immediate disaster. Wrong speed by tenths of a mile per hour, incorrect depth or temperature, wrong downrigger ball, even misreading line angles can put the entire boat out of commission. Done right, though, a trolling spread of ten lines or more can boat big salmon with nearly the potency of a gill net.

Back on the ice, whether the boys are sight fishing in shallow water, or “virtual” sight fishing with their MarCum LX-5 flashers, their presentations are just as efficient as their Great Lakes trolling spreads. When a school of big bluegills is found, Joe and Myron hover their baits above the school, as enticing as sweet little sugar plums dancing in panfish heads.

“When we’re working a tough school of bluegills or crappies,” says Pikulski, “Especially fish that have been hounded and pounded by other competitors, we’ve got a couple tricks that really seem to get fish to eat. Can’t tell you all our tricks, but one of my favorite ways to trigger these fish—especially suspended crappies—is to keep my bait a foot or more above the top level of the school and give it a few big rod rips. I like to rip the jig really hard—move it a foot to a foot-and-a-half at a time. Or, hold the jig in place, then give it one big rip, then let it flutter back, settling in place well above their eyeballs.

“More often than not,” he continues, “one of the bigger members of the school will rise right up on the MarCum and eat the bait. Most anglers will just dance and twitch their jigs lightly an inch or so from the top of the school. This works with some fish. Honestly, though, lots of times you need to really appeal to their predatory sense, especially the bigger individuals within a larger school. Let fish chase and hunt your bait. Do the opposite of what you’ve been trained to do. It’s not always better to make it easy for panfish to grab your offering. Sometimes, even with pressured fish, the key to getting the bigger ones is to bite is to do some radical rip jigging maneuvers—even with tiny ice jigs.

Beyond crafty tactics, to accomplish their goals of winning tournaments, Joe and Myron’s system relies on the choicest gear. “Our go-to bait is a Fiskas tungsten 5mm Wolfram jig dressed with one of several varieties of Little Atom plastics,” Pikulski offers. Tungsten jigs like those by Fiskas, says Joe, fish much heavier than lead, allowing the anglers to use much smaller hooks and jigheads that thump like little heavy rocks down below the hole. Joe’s favorite panfish plastic remains the Little Atom Jumbo Nuggie. “Often, we’ll cut the head off the Nuggie and just thread the plastic tail onto the hook. We’ve probably done best with the Atomic Red Glow and green colors.” 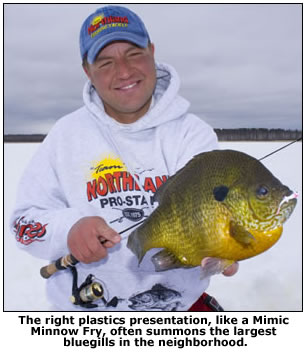 Meanwhile, micro plastics master Tony Boshold, who along with partner Bob Horn finished 2nd in the 2009 NAIFC standings, turns to a parallel path of lures. For Boshold, the combination of a Northland Jiggle Bug and Bro Bloodworm tail has been simply golden. Introduced last winter, Northland’s line of micro plastics— Bro Bloodworm and Scud Bug, in particular—are today the finest renditions of the macro-invertebrates sought by panfish. Top anglers on the NAIFC circuit picked up on these little dandies last year, while intentionally keeping these tricks to under their hats.

“Occasionally, we’ll still choose the meat section when we need to,” Pikulski continues. “When we’re on super fussy ‘gills, a waxworm tipped on a tiny jighead is still hard to beat. But with crappies, we feed ‘em a one-hundred percent plastics diet. Their large jaws dictate that they feed differently than tiny mouthed bluegills. While ‘gills often nip and peck, crappies engulf the entire package. For us, plastics are simply the efficient choice.”

When they’re experimenting, the boys will use contrasting jig and plastic colors—for instance, a black jighead with a red tail. But when fish are just mouthing the jighead and spitting it out, they switch things up, and match jig and plastic colors into one seamless package. Solid jig-plastic combos like black, purple and brown remain great yet overlooked choices.

Above the ice, Joe and Myron have chosen select flasher-sonar units to help them “sell” their baits to selective fish. Interestingly, a high percentage of the country’s top tournament ice anglers have recently turned to MarCum flashers, including Joe and Myron, who began using LX-5 units last winter. “A lot of teams seem to prefer the high-performing features offered in these units,” says Joe. Among the elite top five NAIFC teams, four used MarCum flashers and cameras during last year’s tournament season, including the perennially hot duo of Boshold and Horn.

“Several years ago when they first arrived on the ice scene, we began hearing some great things about MarCum products,” Pikulski adds. “Last winter, we were really impressed with the interference rejection on our LX-5 units. It was a major advantage to be able to continually fish around big groups of competitors without any extra crud on the screen. It’s the best IR system we’ve seen.

Pikulski continues: “In shallow water, the unit’s slim target separation is really key. We’ll sometimes target the zoom all the way down to the 5-foot scale, and our baits and fish still stand clearly out from the surrounding weeds. The gain settings are so sensitive, that we’re able to tune out the weeds, while still seeing our jigs and approaching red marks (fish). I guess when you’re as competitive as we are, it’s hard not to grab hold of every possible advantage.”

As for the 2010 NAIFC season, after four Team of the Year wins, the wise money says Joe and Myron are headed for title number five.