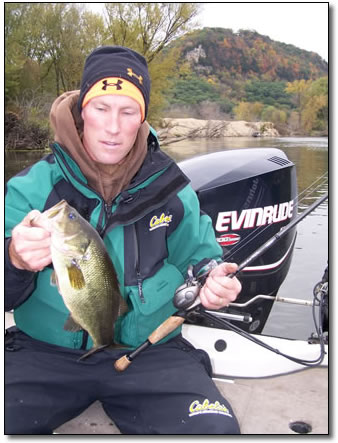 Fishing is a great way to create memories. I have very fond memories of sunrises and sunsets on the water, my first musky, my first truly big walleye, my nephew's first overnight fishing trip, and lots of wonderful times spent in the boat fishing with family and friends. Most anglers have lots of great memories related to fishing. But if you want to catch more fish, you have to be careful that you don't fish memories. Here's what I mean.

Let's say you were on Lake Lotsa Fish last autumn. You caught'em really good on Big Fish Point on an XYZ lure.

You return to Lake Lotsa Fish this year at the same time. You figure you know where you caught'em last year, and you know what you caught them on. So, this year, the first spot you hit is Big Fish Point. You tie on an XYZ lure and start casting: No action. You continue to fish: No action. You remember that you caught lots of fish on this spot last year at the same time on the same lure. Since you're not catching them this time on the same spot on the same lure, you might assume they're just not biting. Bad assumption!

The water temps could be colder or warmer this year, so the fish might not be on Big Fish Point yet.

Or, maybe they don't want an XYZ bait right now; maybe they would like something different. Or maybe you should try a larger or smaller XYZ lure, or an XYZ lure in a different color. You get the idea.

I spent a day on the Mississippi River near Prairie du Chien Wisconsin recently. I was fishing with Terry Fitzpatrick. Terry works in the fishing department in Cabela's in Prairie du Chien. He qualified for the BassMaster Classic Tournament last year, which is a huge accomplishment. If you can qualify for this tournament, you've got to be a pretty darn good angler.

We were fishing a backwater area for largemouth bass. Terry had caught a bunch of bass in this same area just a few days ago near the grass on swimming jigs.

However, several severe cold fronts had gone through the area since that day, and the water temp had dropped about fifteen degrees. We started off fishing the grass with swimming jigs, but action was very slow.

Terry quickly realized what had happened and suggested we make a change. We moved just across the bay to an area where the water was deeper, and we worked crankbaits and swimming grubs slowly. The bass were there, and they were biters. We caught bunches of nice bass by making that slight change. If we had continued to fish where Terry caught them last time, we would have had a tough time catching fish.

It's ok to fish where you caught fish before, but if they're not there or not responding, do something different. Remember that if you fish memories, you might not make new memories.