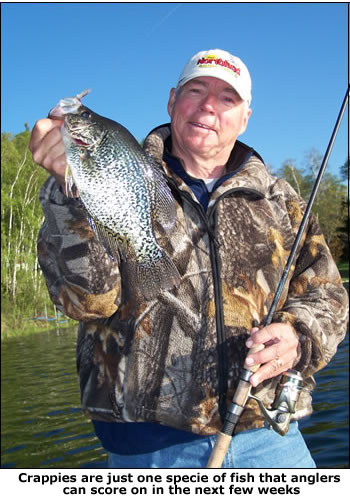 It's the end of September. Autumn is here. The fall season presents lots of great fishing opportunities for big fish and lots of fish. Wherever you live in the Midwest, there's some sort of fishing close by that will be peaking in the next few weeks. Following are some ideas for cashing in on those fishing opportunities.

If you like to catch crappies, and if you have a body of water nearby that is home to a good population of crappies, now is the time to take advantage of them. In the fall, crappies will school up. When you find a school, you can expect to get bit if you do things the right way.

In many Midwest lakes that have crappies, you can expect to find them in deep water. Often they will be holding in thirty feet of water in the basin of the lake. They may be around deep water structure, or they might be away from structure. The best way to find them is cruising around with a close eye on your sonar unit. The Humminbird 798c that I use has a color display that clearly reveals the crappies. When you see them, you stop and fish for them.

Crappies can be spooky, even in deep water. You can hover over and vertical jig them, but often you'll want to move off a bit and cast to them. Throw a Gypsi or Fire-fly jig with a minnow and you'll get bit.

If largemouth bass are your thing, find a good bass lake and expect action. The Midwest is blessed with lots of outstanding bass lakes.

I like to throw a big-bladed Reed-Runner tipped with a four inch Power Minnow or Power Grub for bass on warm fall days. That's when they'll move into reed beds, and when they're in the reeds, they're going to be hungry. I like seventeen pound test Trilene XT on a flippin' stick Lightning Rod teamed with an Abu Garcia Revo reel. This combination allows for plenty of fish fighting power, and you'll need it when a big bass takes your bait in the reeds.

Last idea. There are lots of walleye lakes available to Midwest anglers. It's really fun to find a school of 'eyes on shallow, wind-blown points. These guys are willing biters. If the wind has been blowing into a point for a day or two, the walleyes will be up in two or three feet of water. All you need is a sixteenth ounce Fire-Ball jig tipped with a minnow. Six pound test Trilene Sensation and a medium light to medium action rod will enable you to handle the light jig. These walleyes usually won't be the really big ones, but on a rod of this action, they'll be lots of fun. Sometimes it's fun to go out and just catch a bunch of walleyes even if they're not lunkers. Now is one of those times.

There you have some ideas for taking advantage of the great fishing that autumn offers. Now it's up to you to get out there.