A “Power” Program for Walleyes

Nearly fifty years after the inception of the modern live-bait rig-what's today known simply as the 'Roach Rig'-its sheer effectiveness still raises eyebrows and turns heads. Take a vigorously squirming minnow, nightcrawler or leech, and couple it with a hook, leader and sliding sinker and you're fishing the deadliest walleye presentation of all time. Get a natural, lively bait to the bottom, and just start creeping your way along fruitful structure. Sooner or later, a walleye is going to eat. It's just that simple. 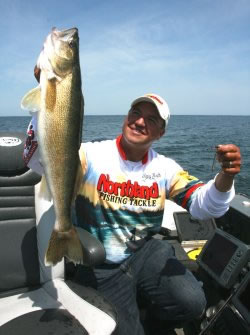 Well, sort of. During the same fifty years, a number of nice little developments have transformed a serviceable bait delivery vehicle into a precision live-bait system. The walking sinker evolved into the Quick-Change Roach Sinker. The bottom bouncer transmogrified into the Northland Slip Bouncer. Live bait care tools, like those by Frabill, now ensure a healthy supply of critters. All the while, hooks, lines, and electronics have advanced almost beyond comprehension.

Which is where "power rigging" enters the equation. It's old school rigging (light and easy) meets heavy metal bottom bouncing (head-banging fast), plus a dash of new wave tackle and tactics. Developed by ace guide Tony Roach, this hybrid live bait system is indeed, as he calls it, "Roach rigging on steroids."

"Power rigging lets me maintain a natural live bait presentation, while triggering fish with a bit more speed," states young Roach. "Sort of like rip jigging, the presentation induces a reactionary response, while the live bait closes the deal. Early in the season, you're moving slow with rigs and jigs, presenting bait to fish on a definite 'feeding bite'; show 'em a tempting morsel, keep it in front of their snouts, and they're going to eat. Later on, as water warms, and the food supply expands, walleyes can turn a little tricky-a slight boost in speed is often all it takes to get fish to go.

"What I really like about the power program is that I can work quickly along a lengthy edge or over a vast flat, moving .9- to 1.2-mph," he continues. "I can still put natural bait in front of them, but I can show my wares to a lot more active fish. What I also like is that the more boats there are working a spot slowly with rigs, the better. I can cruise right along and mow down the active biters."

"It's really sort of a hybrid between slow-down rigging and dragging spinners on three-ways. I'll start doing this pretty early in the summer-right after those initial insect hatches- and stick with it on and off through late summer into early fall. Once surface temps hit 60-degrees or so, it's time to break out the power rigs. Then again in August and September, it really shines as water begins to cool a bit.

"Those days when everyone is either creeping along with a standard rig or bottom bouncing at a good clip--especially on flat calm days--that's when I'll break out the power rigs." 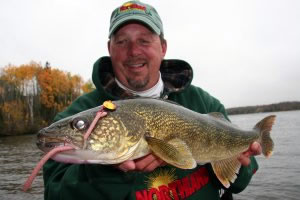 Roach's power program employs a straight wire bottom bouncer, such as the Northland Slip Bouncer, coupled with a super long leader-up to 15-feet for coverless flats- tied with 8-pound test Berkley XT. At slower speeds he typically rigs a live ribbon leech, small shiner or chub on a single #6 or #4 hook. If Roach is pulling crawlers, it usually means he's moving a bit faster, employing a dual hook harness. For added attraction, he occasionally adds a single fluorescent bead, or a single 00 flicker spinner. Often, too, especially with longer snells or near vegetation, he likes to add a Rainbow Float, 1 to 8-inches above the hook. "You can pin the float in place using a rubber Snubber Stop," he asserts. Keeping the float well above the hook holds the entire leader off bottom, rather than just the bait itself.

While the hook, float and live bait power the presentation, the Slip-Bouncer drives. Unlike the standard R-bend bottom bouncers, Slip-Bouncers are composed of a single straight wire shaft with an open eyelet on top, which lets you feed line freely to biting fish-no resistance. The 5-inch wire "feeler" transmits bottom types like a stethoscope, while a slide-on weight system yields rapid adjustments to varying depths, speeds and currents. Another advantage: tickled over soft silt, mud or sand, these needle-like weights disturb very little bottom substrate, an occurrence that often spooks walleyes. "Slip Bouncers are a gem-something every angler should add to their bag of rigging tricks," Roach says.

"Power rigging is ideal for inexperienced anglers and old pros alike. If I've got beginners in my boat, I can just set soft-tipped 8-1/2- foot trolling rods, like my Mr. Walleye SuperPros, in rod holders, and let them load up and set themselves. If we start missing fish, we simply hold rods and delay our hooksets. Drop the rod tip back toward a biting fish, feel for solid weight, and give a nice long sweep. Once you get things dialed in, you'll hook every biter. It's a pretty forgiving system.

"Really, power rigging can be the answer on any given summer day. Right in the middle of a classic 'slow-down' rigging bite, you can really put on a clinic. But the power program shines later on, too, when everyone else is moving faster, pulling standard spinner rigs. In both cases, the system can really make you a hero on those tougher flat calm day bites. Tell you what, any method that saves my hide on tough guide days is okay in my book."