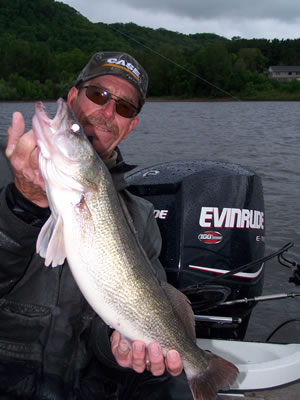 The fall season is a great time to go fishing. If you're looking for a true trophy, autumn is a good time to achieve that goal. If you're interested in catching a few fish for the table, you can do that in the fall period also.

And, if you want to experience some spectacular colors in the trees, see wildlife, sometimes have the lake to yourself, and just generally be outside during a really nice time of year, you can't beat the autumn season.

However, in some lakes across the Midwest there is a brief period of time when fishing can get tough. This event is called the turnover. It doesn't happen at the same time on all lakes, and in fact it doesn't even happen on all lakes. When it does occur though, it can make fishing very difficult.

As fall progresses and air temperatures cool, the surface of the water cools also. At some point the layer of water near the surface becomes cooler than the deeper water. The cool water has a tendency to sink, so it switches places with the deep water. The deeper water comes to the surface, the surface water goes down. The layers of water "turnover". This phenomenon usually coincides with some windy days. The turnover is most noticeable on deeper lakes. Shallow lakes don't seem to have as much change in water temperature from top to bottom.

Apparently this turnover event goofs the fish up, because the bite seems to get bad for a few days during and just after the turnover. The best way to combat slow fishing during the turnover period is to switch to another body of water. Some lakes will turnover earlier, some will do so later. If you're fishing a deep lake and suspect it is turning over, go to a smaller lake. It may have already turned over and the fish have established their fall patterns.

A very safe bet is to go to a river. Rivers are usually a very good option whenever weather creates difficult fishing on lakes.

If switching to another body of water isn't an option, try putting on a crankbait and trolling. Cover lots of water and you'll probably find a few fish willing to eat. Whatever you do, get on the water. A nice fall day of fishing shouldn't be avoided just because conditions aren't optimal.