Every guide worth his salt has one. You know, that sneaky trick up his sleeve that always keeps his clients' rods bent. Cold fronts, breathless firecracker days, July blizzards (it could happen)-the conditions are almost beside the point. These slick tricks simply catch fish, atmospheric conditions losing their bark and bite. Ask any guide: when times get tough in mid to late summer, it's real nice to know you've got that ace bait awaiting deployment.

In my own guiding days, the golden ticket was a Gopher Bait Spin tipped with a minnow. Throw these simple contraptions behind the boat, start driving around the weededge, and pretty soon, we'd have all kinds of fish hooked up- everything from bass and pike to walleyes and crappies. Another client fish fry, delivered. The photos would tell the story-big grins on everyone's face. Curiously, today, lures like the Bait Spin remain overlooked and underutilized. So simple in design, but oh so appealing to fish, which pretty much describes the three patterns that follow: basic, fundamentally great baits that simply catch lots and lots of fish. 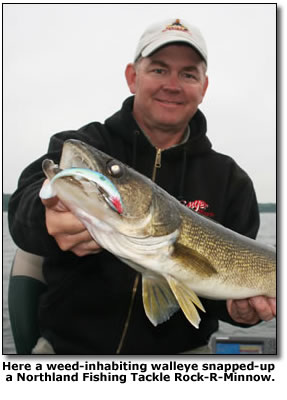 Sneakin' through the Weeds
Early in my guiding career, I still recall a particular blazing-hot August day. It had been a challenging one to say the least. I was falling all over myself apologizing to my clients for the tough bite when who should roll into the dock but the legendary Marv Koep, possibly the most-recognized fishing guide in the North Country. Of course, Marv had fish (he always did)-a beautiful mixed bag of walleyes, pike, crappies, and even a deep-bodied smallmouth for someone's wall.

Days later, I caught up with Marv, who graciously shared his secret. "Weed Weasels tipped with minnows," he said simply, flashing his characteristic sunshine smile.

As I gradually discovered in the years that followed, Northland Weed Weasels were a secret of many top guides. Slick pointed nose, tapered head, light Y-weed-guard, bait-keeper, Mustad Ultra-Point hook-the combination proven deadly for everything with fins. Mostly, though, the boys kept the 'Sneak secret under their hat, so word never spread much beyond a handful of local sharpies. Still, I quickly learned that to add these amazingly weedless jigs to my own bag of tricks. On any given summer day, I always had an array of rods rigged with Weed Weasels. Slowly we'd move along the edge of the spacious weed bar, peppering casts up into the vegetation, and swimming the combo back through the cover. Within a cast or two, rods would bend. The trick never failed to produce action. And I mean never.

Sometimes, we'd tip the jig with a three-inch grub for extra buoyancy, color and action, but live bait was the thing. Wild redtail chubs, small suckers and golden shiners-you absolutely knew something was going to take a bite. In the world of guiding, that level of confidence is a beautiful thing. The Weed Weasel fished through weeds so well, so clean, that anyone could catch fish with it.

Throw the bait out, count it down and start slowly reeling it back. Then as now, it's just that simple. When summer's heat sends fish deep into vegetation, many of the best Northwoods guides still reach for their classic Weed Weasels. Ask their clients. These jigs just plain catch fish.

A Rockin' Bite
While everybody and their uncle's out backtrolling the rocks, sand and mud, guide Tim Anderson likes to cast weeds. Nothing crazy about that. Nothing, that is, except the walleyes, muskies, pike and bass he's extracting from these jungles. Anderson operates Central Minnesota's Big Fish Hunt Guide Service, chasing the hottest predator bites going. This year, he discovered a deadly new lure that's out-fished everything from crankbaits to spinnerbaits, and jigs to jerkbaits.

For Anderson, that lure is the Northland Rock-R-Minnow-a super-realistic soft plastic paddletail swimbait. Among insiders, the Rock-R-Minnow is on the fast-track to "classic" status, a lure that's always kept rigged and ready in the boat, even though said insiders aren't themselves spilling the beans (sound familiar?). Anderson likes the bait for its lively, yet easygoing stature. "If you can cast and reel, you can catch fish with this bait," he says.

And he's right. Rigged with a simple 3/8- to ½-ounce jig-head or the weighted Lipstick Swimbait hook included in the package, the 5-inch Rock-R-Minnow casts like a bullet, sinks fast, and slithers through grass like a snake. Reel, reel, then pause a second. Reel-reel-reel-pause again. Rip a weed or two. Whack! That's all there is to it.

On recent trips to a famous walleye lake, Anderson and I boated fifteen to twenty big walleyes each day, as well as several bonus pike and bass. We filled the Frabill net with a constant procession of heavyweights, all while dancing around bored jiggers and riggers. 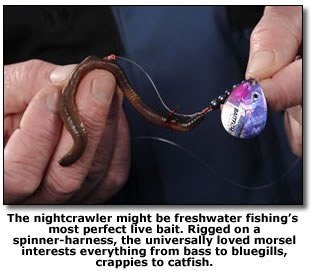 Roach's World Spins
"If I simply want to catch fish in summer, I'm pulling my little spinner rigs," says veteran guide Tony Roach. Growing up with a family of mega-talented anglers, Roach learned early that if he wanted to catch more than sloppy seconds, he'd have to get sneaky with his own set of tricks. Chief among them was a small spinner rig tipped with live bait. More often than not, Roach's approach delivers the goods-a fact to which I can readily attest.

"In summer, I like to tie my own multi-species rigs," Roach states. "Start with a three to six-foot leader of 6-pound test mono. Snell on a single #6 Super-Glo Attractor Hook. Slide on three or four 4mm beads, a clevis and a #2 Baitfish-Image Colorado blade. In dirty water, I like Northland's Golden Shiner pattern. For clear lakes, the Yellow Perch pattern is a winner."

In weeds, Roach runs a bullet sinker. Over clean bottom he prefers a Northland Slip-Bouncer, which lets him troll faster without losing the ability to feed line to biting fish. He tips the rig with a medium leech and simply starts cruising along the structure using his bow-mount electric motor. When the leech needs replacing, a Frabill Leech Tote is always at hand, and quickly coughs up a volunteer.

Roach's multi-species spinners account for a dazzling array of catches. The #2 blade weeds out little panfish, and selects for the biggest bluegills in the lake. If the spot holds crappies, walleyes, perch, or bass, the rig takes them as well. "It's what I call my vacuum rig," Roach quips. "If you pull this thing through fish, it's going to get bit."

Indeed, in want of a summertime fish fry, or just plain action at the end of your line, it would be hard to imagine a more potent lineup than the triple threat of tricks above. Some baits overlooked, others destined for greatness-regardless, I won't be betting against those old guide secrets anytime soon.