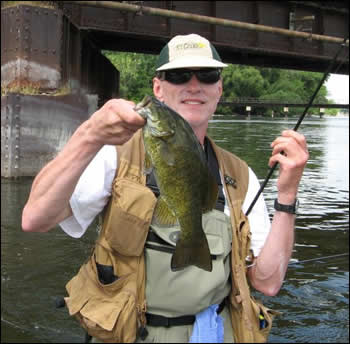 One of the enjoyable aspects of writing fishing articles and giving seminars has been all the fellow anglers I've met and gotten to know. Troy Stoeger, from Appleton, read one of my articles on Lake-Link and e-mailed me about our shared interest in wading for river smallmouth bass. He told me about his success on the Fox River in the Appleton area and invited me to drive up and join him. I finally took him up on his offer and we met in Appleton at 9 a.m. on Sunday, July 18.

I followed Troy to his first spot and as we pulled on the waders and checked our gear, I was intrigued by this urban setting. The day was beautiful with temperatures reaching 75 degrees, a light wind and a few clouds. The only thing that concerned me was how the stormy weather the previous few days might impact how active the fish would be.

We crossed railroad tracks and followed a path for 100 feet to the river. It looked great. I was pleased and surprised at how clear it was. After wading out to thigh deep water, we made our first casts. Those of you who have read my river articles or come to one of my seminars know that one of the two rods I was carrying had the Rebel Teeny Wee-Crawfish attached, and this is what I began with. Using a 6'6" light-action St. Croix Legend Elite rod matched with the Pflueger Supreme XT 9025, I made a long cross-current cast bringing the lure back against the current, which adds to the tremendous fish-attracting vibration. A nice fat 13 inch smallie hammered the Teeny Wee-Crawfish. What a great way to start the day. My second outfit was a 7' St. Croix 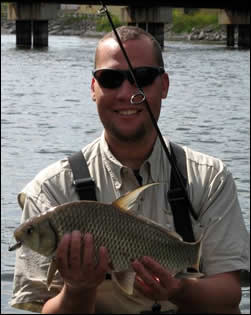 medium-light Legend Elite with new Shimano Symetre 1000. Alternating rods, I had some exciting topwater action with the Booyah Pond Magic Buzzbait in white. I have found the best way to fish this lure on rivers is to bring it cross-current, perpendicular to the shoreline. For both presentations in such clear water, I added a 24- to 30-inch leader of 8 pound fluorocarbon line. My two reels were spooled with Daiwa Samurai 18 pound test, 3 pound diameter braid and Power Pro 10/2. I began using fluorocarbon leaders with great success in the clear waters of Door County and have continued them with most of my fishing. The Double Uni Knot is the best way to connect the fluorocarbon to braid.

Shortly after I landed my first smallie of the day, Troy had his first fish on a small custom football head jig he makes tipped with a 2-inch YUM Dinger type soft plastic. He was using a 6'6" medium-light St. Croix Avid with the Pflueger President 6725 spooled with Stren Microfuse 8/3. With the rocky riverbed, he was also getting snagged quite often, but felt the results would be worth the aggravation. He fishes various sections of the river throughout the Fox Valley and has had great success, primarily with smallies, but does catch other species, which he did this day with a, quillback carpsucker. We worked our way up river hitting the deeper sections, which were 2 to 4 feet deep, as well as areas around the supports of bridges. As noted, I had my best luck with the Teeny Wee-Crawfish and Troy with the jig and plastic. Before leaving this spot we caught and released a couple dozen samallies up to 16 inches. Both of us also lost a number of fish that pulled off in the current. Troy told me that this was a little sub-par and a few days later e-mailed me that he'd gone back the next evening and caught 22 in a couple of hours with the Teeny Wee-Crawfish. Troy's now jumped on the Teeny Wee-Crawfish bandwagon. It is a tremendous lure for river smallies. It comes with #14 treble hooks, which are quite small, so I modify it by replacing the #14 back trebles with a #10. I have found this to be very helpful in reducing the number of fish that pull off in the current.

At about 2 p.m. we headed to another location in downtown Appleton. Troy showed me a stretch of river that looked perfect. He had to leave, so I gave this spot a try on my own. However, having waded waters across Wisconsin and into Iowa, I was a little nervous with the current and the lack of clarity, which kept me from knowing what I'd be wading into. I've learned during my many years of wading that being cautious is a good thing. I fished for a half hour from the rocks and caught two nice 15 inchers and had a few additional hits on the Teeny Wee. It was frustrating because I wanted to get to the other side for what would have been better fishing. With no access from that side, I headed back to our first spot for another try. I fished about an hour in and around the bridges catching a few more and losing one that was in the 17-inch range that had given me some exciting action before throwing the lure during a tremendous jump.

I appreciated the invitation from Troy to try a river I'd not fished before. I was very impressed and will be back later this month or early in the fall. One thing I encourage when fishing river smallies is to explore. I love exploring new water, and the Fox River in the Appleton area was well worth the drive from Milwaukee.

Bill Schultz
Bill Schultz lives in New Berlin and Sturgeon Bay, WI, and is a contributing writer for several magazines and web sites. Since catching his first smallmouth bass in 1994, he has caught and released over 26,700. His focus has been on the big waters of Green Bay in and around Sturgeon Bay, along with rivers and streams throughout Wisconsin. Catching and releasing smallies and sharing his recipe for success has become a passion for him. Bill is on the Pro Staffs for St. Croix Rods, Mercury Marine, Yar-Craft Boats, Jackson Kayaks, Bending Branches/Aqua-Bound Paddles, Kalin's, Keitech USA, RAM Mounts, Cedar Lake Sales and Malone Auto Racks/Trailers.
BITS & BITES
Advertise here
Advertise here
Please take a moment to visit our sponsors. Without them we would not be here.