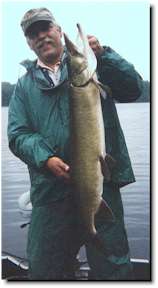 As an avid muskie angler, with a steamer trunk sized tackle box full of monster sized lures, I’d have to say......"Not Always." Sure, there’s a definite time and place to fish these hernia inducing baits, but not always. I’m sure that there are some die hard muskie hunters out there ready and willing to argue with me but just wait a minute, hear me out and think about it.

How many times have you had a muskie hit your lure while fishing for bass or northern? If you’re like me and you do fish waters where these toothy critters roam, it’s happened many times. There used to be a fall bass tournament on one of our local lakes and there was always one recurring complaint (other than

After hearing this, and having it happen to me a couple of times, the light went on (you don’t have to hit me with a 2x4 too many times) and I decided to try deliberately to catch a muskie on bass tackle. One early fall day, it was too nice to be home doing all those things that husbands are supposed to do before winter and I decided to jump on a local lake and “take a few casts." It didn’t take too long for success to come my way with a 45 incher. While fishing conventional muskie tackle and seeing several fish follow but not strike, I decided to pick up a bass rod and “give it a whirl." I went back to a cabbage bed where I had raised a muskie and started throwing a 3/8th’s ounce black/silver single blade spinnerbait. Less than five casts later, I was fast into a nice muskie. Amazingly, I managed to land it!!!

The neat thing about light tackle muskie fishing is that now, any muskie that you land is a true trophy. Lets face it, a 36 inch muskie on 65 pound test superline and a 7 foot muskie rod is a “nice" fish but not much of a challenge. Put the same fish on a 5 ½ foot bass rod and 14 pound test and it’s a whole new ball game. Why else do you think I have so much gray hair? Also, part of the reason for the huge rods and reels is for throwing those HUGE baits. If you’re not using those, why have the heavy tackle? 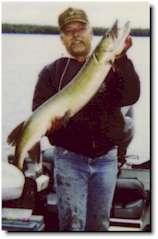 Another great thing about light tackle muskie hunting is just about everyone has the equipment for this. Or else it’s easier to justify to your significant other, “this isn’t a rod and reel that is only for muskies dear, I can use this for bass, northern pike AND muskies". I’ve found that a new fishing rig is easier to get into the house if you can use it for more than one kind of fish. As long as we’re talking about the tackle, why don’t I tell you what I use, without getting into brand names. First of all, get a good, quality, multiple ball bearing levelwind reel, whatever you prefer and feels good to you. Couple this with a 6 to 6 1/2 foot medium action, fast tip, straight handle baitcasting rod. Spool the reel with 14 to 20 pound, premium, low stretch line (mono or a superline) and you’re ready to go. A smooth drag is a must for this type of fishing, believe me, you’ll need it.

Lure selection is simple because if you’ve fished for bass or pike, you already have the lures. I use 3/8 to ½ ounce, single spin spinnerbaits, 5 to 7 inch long minnow baits, Mepps #5 bucktails, buzzbaits and Zara Spooks. See, you probably already have these in your tackle box, don’t you? I’ve found that these baits are fantastic on all types of muskie water, especially during cold front conditions. “Everyone" knows that during cold front conditions, you downsize your baits....right? Well, that puts your lure selection right down into bass/pike size baits, doesn’t it? By doing this, you’ll find that not only will you catch muskies during cold front conditions, but you’ll find that there’s a lot more bass and pike in your lake than you thought there were. And, while the more traditional minded muskie hunter is fruitlessly

pounding away, throwing logs and huge “chunks of metal", you’ll be busy, cleaning up on those muskies that turned away from his (or hers) too large lure. Another benefit is that I think muskies can become conditioned to conventional muskie lures, they’ll follow but they just won’t make that final commitment. They’ve seen it before and “Man, when I bite that, it hurts." Throw a small bait at them and they’ll often smash it when they’d just follow your “El Hugeo Mega-Monster Kill’r." Hook sets into a muskie’s bony mouth are often easier too with a sharpened (you do sharpen your hooks...right?) smaller diameter wire hook. You’ll also find that you’ll get cut off far less than you think you would. If it does become a problem, I’ve found that 27 pound sevenstrand wire makes a great leader and doesn’t kill the action of the lure.

Recently, I had a client (now a friend), Mike Bellush from New Jersey in my boat. It was classic cold front conditions. We went to a small, clear lake nearby and within the first 10 minutes, we had a nice 25 pound muskie up to the boat....twice. We worked the shoreline weeds, rocks and timber, in the process, catching several largemouth bass and northern pike. I decided that with the clear, bright skies maybe we should go to a darker lake, so off we went. It turned out to be the best decision of my career. We got onto the next lake, around noon, probably not the best time of day but.....what the heck, you can’t catch em if you’re not fishing. In the next 6 hours, we had eleven follows, had one (about 36 inches) blow up on a bait as it was being lifted from the water, hooked three and boated one. Maybe not the best percentages of “hits" to “boats", but I seriously doubt if we’d have had that much action throwing regular size muskie baits. One of the muskies was a good, solid 45 inch muskie that hit, made a sizzling run, leaped 3 to 4 feet from the water, did a two and a half gainer and finally broke off....Man, I was laughing about that fish 3 hours later...and about the look on Mike’s face. He was astounded to say the least....he’s also seriously addicted to muskie fishing (sorry Mrs. Bellush). And the best part, we probably caught a couple dozen bass and northerns while also getting all this muskie action. 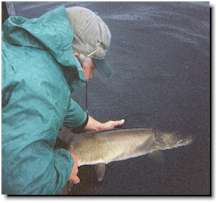 You’re probably saying, “Yeah, that’s fine for small fish, but what about a BIG one?" Well, I’ve landed muskies up to 48 inches on this type of tackle, so don’t think for a moment that you won’t interest “the big ones."