By Scott Ehricke - July 1, 2009
I can remember growing up in Appleton,WI and I always looking forward to the upcoming walleye run and whitebass run. You see, my uncle used to drive down from Fremont and pick me up and take me with him. I was only 6 or 7 at the time, but I remember it like it was yesterday. He had this old 16 foot boat, with a piece of plywood on the bottom, so it was flat, we had some old rods and reels, and most of them were covered in scales and debris from all the other fishing trips he went on. Sometimes they were covered in duck feathers too, although I never remember catching ducks out of that boat. We had a pail of minnows, and an old 25 horsepower Johnson.

It really never mattered where we went on the river, I was just so happy to be fishing, and being out on the water. I knew then, that this is why I was placed on this earth. To fish, and to catch fish. We used to fish the area from the old Fremont Bridge, up to Red Banks quite a bit. We always did ok. My uncle would usually out fish me, but hey, I did not care, I was happy to be

"By letting that one fish go, the fishing gods will now bless you, and they will allow you to catch plenty more. Always let those big ones go, they are the reason we have walleyes here and those females deserve to make more..."
there. I remember one year when the whitebass were running and we must have had close to 100 or so, and the action was non-stop. We fished in a place he called "the old maple tree", and it was great too be there. We were slamming whitebass, I was catching them too, and then I had a hit on my pole like I never had before. The fish was big and I was freaking out. My uncle thought I had hooked into a sturgeon, so he just sat there and told me to play it out a bit, not thinking I would get it in. Here I was fighting this huge fish, not knowing what to do next, and he just sat there watching me, drinking a beer. I look back at it as I am typing this, and I do not remember my drag being set right or even what we had on for hooks, whether it was jigs, wolf river rigs, or just a hook and minnow, I do not remember. After several minutes of fighting this fish, it started coming towards the boat, and then my uncle kind of leaned over the boat to see what was going on and then all hell broke loose. What he thought was a Sturgeon, ended up being a nice walleye. Well the minnow bucket got knocked over, stuff was flying everywhere, and he was getting the net! I thought I had done something wrong and he started yelling at me all of a sudden on how to fight this fish. A few minutes before that, it did not seem to matter, but oh, now that we have a walleye, I needed direction I guess.

After what seemed like 10 minutes, we had this walleye in the boat and boy it was a beauty. My first walleye ever, and it was close to 25 inches long and full of eggs. I know this because my uncle told me so. I think about it now though and kind of chuckle that this walleye was full of eggs in mid-may, but hey, I was a kid and he told me it was full of eggs, so it was. We looked at this fish for a few minutes; he pulled out his old 110 camera, and told me to hold it up for a quick photo. I was grinning ear-to-ear, and so glad to be there, and now I caught my first walleye, what else could a kid want. He snapped a picture, but he had no flash bulbs, so it did 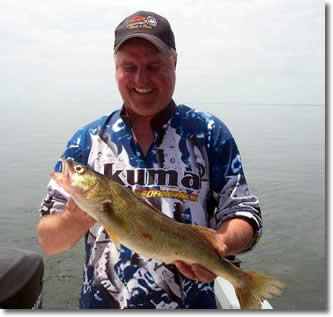 not turn out real good, and then he took that fish from me, and threw it back into the mighty Wolf River to be caught again.

I asked him why he did that, and he turned to me and said something I will never forget. He said "Scott, by letting that one fish go, the fishing gods will now bless you, and they will allow you to catch plenty more. Always let those big ones go, they are the reason we have walleyes here and those females deserve to make more." I did not understand that at all. Hell, I caught the fish, I wanted to take it home and show my folks, and friends, but no we have to throw it back in.

After that fish, we pulled up the anchors, pull started that old Johnson, picked up the minnows and the bucket and headed back down river. It was so cool to see how the river was lit up with people and shacks everywhere, and tons of people fishing from shore. It was like the sun never set on the river that night. We got back to the landing and my uncle knew someone there and they asked how we did. He told them we slammed the whitebass, but "Scott here caught a hell of a nice walleye." I was so proud!

Now that I am older and a little bit wiser, I understand what he meant that evening. The females are our future, and I respect that. I have caught thousands of walleyes over the last 25 years or so, and I also have kept a few big females as well that I felt would not make it. I do release a majority of the fish I catch, and when I do release a big female, I always ask the walleye gods to allow me to catch plenty more. I love this sport, I love this lake, and I love to fish. That is what it is all about folks. The memories, the laughter, taking kids fishing and bragging them up to your buddies and friends, and also practicing conservation. Do not get caught up in all the politics of fishing. Rather think about a time when it was fun, and remember what it was like to just fish.

Take a kid fishing, have fun, and you may just get a partner for life!