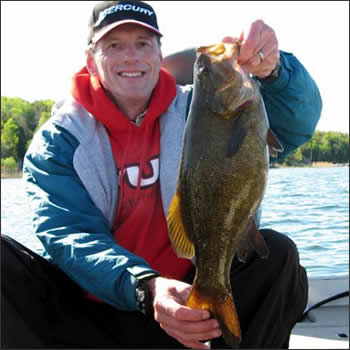 During the past 14 plus years, I've had the good fortune and pleasure of spending 125 days chasing smallies in Door County. Throughout, my efforts have been rewarded with having caught and released hundreds of smallies.

Like many of you who have fished this area, or fished for lake smallies in general, I have tried a plethora of lures. I've always tried, however, to keep it simple and not over do it. I think I've done a good job of narrowing my Door County presentations to those that work best, based on research, talking with others and through my own experience. One presentation that usually is near the top of most Door County lists, and now at the top of mine, is swimming a grub on a jig.

For most of my years fishing Door County, swimming a grub on jig is a presentation I've used on a somewhat regular basis. It is one of the easiest of all presentations. You cast it, let it settle for a second or two and then retrieve it slowly. I use St. Croix 7' medium-light and medium action rods. With the ultra-clear water, long casts are important. That's why I use the 7' rods, and for the first time this year tried a 7'6" medium-light, which has been tremendous. I'm using reels suitable for 4- and 6-pound diameter line. Some examples of what I'm using are Shimano 1000 and 2500 size reels, Daiwa 2000 reels, the Abu Garcia Soron STX10, along with Pflueger Supreme XT and President XT in the 30 size.

In recent years I've been using Berkley Fireline and Stren Microfuse in four-pound diameter, 10-pound test (10/4) and six-pound diameter, 15 pound test (15/6), along with Power Pro 15/4 and 20/6. I like the strength and sensitivity. In the ultra-clear waters of Door County, I utilize a fluorocarbon leader, which is also strong and sensitive, but can't be seen in the

"It is now my "go to" presentation, and over the past two seasons has truly produced some impressive results."
water. I began utilizing the 8- or 10-pound test fluorocarbon leader when friend and longtime Door County guide and owner of Howie's Tackle, Tim Dwidiuk, explained how his numbers have always been better with the fluorocarbon leader. Based on my experience in 2008, which was my first using the fluorocarbon leader, I agree.

Has swimming a grub been my "go to" presentation in Door County? No, it was one of a variety of presentations I'd use. It is now my "go to" presentation, and over the past two seasons has truly produced some impressive results. For years, I used a variety of grubs I received directly from a few companies, which were mostly 3-inch versions. Most of these had a smaller profile body and fairly narrow tail. Again, listening to Tim Dawidiuk and a few others, I began using the Kalin's Lunker Grub in June of 2007. I wish I wouldn't have waited so long. I've had very good success with both the 4-inch and 5-inch versions in a variety of colors, including Ed's Smoke, Blue Pearl Salt & Pepper, Avacado/Green Salt & Pepper, Pumpkin Salt & Pepper, Pumpkin Salt & Pepper/Green Flake, Green Pumpkinseed/Purple Flake and Smoke Salt & Pepper. I've also have had good luck with the YUM Muy Grande 4-inch Grub in Smoke Salt & Pepper, Glimmer Blue Pepper, Green Pumpkin, Pumpkin Pepper/Green Flake and Green Pumpkin/Orange Flake.

I feel the key to the grubs I've mentioned is the full-body profile and long wispy tail. You will hear you should swim these with the tail pointing opposite from the hook point. Actually, this is the way the Kalin's were designed. I rig them tail opposite the hook point. When the grub gets a little beat-up, I bite off a half inch and reverse the tail direction. I have not noticed much, if any, difference. The smallies still seem to like it. It's very important to line the hook shank up with the seam so that the grub swims straight.

The jig is a very important part of this presentation and the standard "bargain bin" jig usually won't do. You need to use jigs in the 1/16, 3/32 and 1/8 ounce weights with a longer hook shank. Ideally, jigs with 2/0 and 3/0 hooks, which allow you to bring the hook through the grub body and out near the end of the body portion. In the past I was using a good ball head jig, but after reading about the Mushroom Head jigs from Gopher Tackle in In-Fisherman magazine and having some sent to me by a friend from Illinois who has attended my seminars, I thought I'd better give these a try. Now that I've had a number of days on the water with great success, I know I've found a super jig for swimming plastic grubs. Gopher's Big John's offers an eyelet that is not only flush with the jig head, but also crossways and at an angle. Another jig that has worked well for me is the Bait Rigs Slo-Poke GrubMaster Jig in the 1/16 and 1/8 sizes. These were designed with the Kalin's Grub in mind and also have the eyelet crossways and straight out the front of the jig. Unlike a traditional jig, the weight is distributed along the hook shank.

As I noted earlier, retrieve the grub slowly in all water temperatures. Swim it just above the bottom. If you touch rocks, speed up your retrieve. The smallies seem to hang close to the bottom in the two to eight feet of water that I'm usually fishing in May and June. This tendency may also be enhanced as gobies have become a major food source for the Door County smallies. They don't have a swim bladder and live on or near the bottom.

If you are planning on heading to Door County this month or in the future, I would encourage you to give swimming a grub on a jig a try. I think you'll be happy you did.