By Steve Huber - October 1, 1999
O.K., it's October, you're not really into football on TV., you don't bird hunt and archery isn't your thing. Do you find yourself looking at your boat and counting the days until next spring? Well, take off the cover, load up the ol' walleye gear and get going buckaroo, there's walleyes to catch!!

What a lot of people don't realize is that there is a fall walleye run that almost rivals the run in the spring. 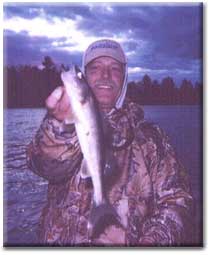 The MarbleEyes are feeding heavily for the upcoming winter and are fairly easy to catch, they're almost as easy to catch and as predictable as in the spring. One of the best things about the fall run is that, unlike in the spring, everyone else is in the woods, so you'll have the water virtually all to yourself.

Location is fairly straightforward. Rivers below dams are a great place to start looking. The fish will stack in the scour hole below the dams, feeding heavily on baitfish washed past them in the current. Any current break or eddy deserves some attention also. Other good places to look also are the first deep holes or river bends downstream from the dam. These can be anywhere within the first mile below the dam or spillway. Also, rip-rap and rocky shorelines need to be checked out. The walleyes will tuck into these current breaks and dart out for an easy meal, it's amazing how shallow walleyes can be at this time of year. It's fairly easy to locate fall walleyes if you have good electronics and know how to interpret the signals.

While seeing walleyes on the locator is always appreciated, don't pass a spot by if all you see is baitfish on the screen. Where the baitfish are, the walleyes won't be far behind (also the northern pike, muskies, smallmouth bass and other predators). So if you're seeing (or catching) perch, don't be disappointed, the walleyes are there, as perch are one of the preferred food sources at this time.

One consideration to take into account is bait size, what I do is cover all bases by having several sizes of minnows. Leave the leeches and crawlers home, walleyes want smaller fathead minnows and 3 - 4 inch chubs now. The great thing about having two different baitfish is that it seems that the smaller males like the fatheads and will give you great action and the bigger females like the chubs. So you can decide, action or trophy fishing.....or a little of both. If they are really slamming the fatheads, try the larger minnow, maybe the females have moved in.

There are almost as many ways to catch walleyes this time of year as there are blaze orange coats at a Packer game, but here are some of the quick and easy ones. A simple ball head jig and minnow is probably the most common. Depending on the color of the water, chartreuse is usually a good color to start with, it seems to offer a good contrast to the darker, stained waters of northern Wisconsin. But, for some reason, purple also seems to work when chartreuse doesn't, so it pays to experiment with color if the bite is slow. Another thing that seems to entice these sluggish, cold water wonders is the use of rattles on the jig. If you can find the single tube rattles with a small collar, slip one of these on your jig if they aren't taking, sometimes this makes a difference. Depending on the current, I'll use from 1/16th to 1/4 ounce jigs, use just enough jig to make contact with the bottom. You might have to go even heavier, depending on the amount of current in the river where you're fishing.

Usually, while jigging up some walleyes, I'll have another rod working, especially if the bite is slow. This rod I'll have rigged one of two ways, with either have a spinning rod rigged with a slip bobber, enough split shot to hang it straight in the water and a single # 6 or 8 hook or I'll have a light baitcasting rod/reel combo out with a "Lindy Rig". The slip bobber rig I'll usually rig with a smaller, lip hooked minnow, it seems that if the walleyes are being really finicky, they want a bait just hanging in their face, without much action and a smaller minnow seems to trip their trigger. The larger chubs, I'll put on the jig and hop, crawl, drag or swim, depending on what the fish tell me that they want for a retrieve at this time. Often, I'll just drop this rig over the side of the boat, lay the rod down on the platform and leave the bail open on the reel. I have a sophisticated system for keeping the current from cleaning all the line off the reel. I set a coffee cup on the line, with just enough cup on the line to lightly hold it in place. You might want to experiment with something a little more "professional", but hey, it's simple and it works!! It also keeps me from overdosing on caffeine.

The baitcast rod, I'll have set up with a 3/8th ounce bottom walker sinker, a 3 to 4 foot snell and a floating jig head. Again, this is a super sophisticated system. Lip hook a minnow, and over the side it goes. Again, the rod gets laid down on the platform but this time.....there's no coffee cup (I keep hoping for rod holders for Christmas but until then.....) Nope, I just adjust the cast control until it barely holds against the current and I pay out line until the sinker hits bottom. At this point, I'm fishing!! Difficult huh? Now, I cast a jig/minnow combination, keeping an eye on the reel. If I notice that the spool is turning, I've either got a fish or I need to adjust the cast control a little tighter. If you've got a reel with a "clicker", use that, it's gotta be better.

The thing to realize is that at this time of year, the water is cooling off and the walleyes, while more aggressive than they are in the spring, still usually won't take a really fast moving bait. But experiment with retrieves, I've seen it where they want it just barely hopped when we've first gotten out, only to want a faster, swimming retrieve later on in the day. If that turns out to be the case, it probably wouldn't hurt to try casting a minnow type bait or a rattle trap type lure and pick off the more active feeders. Afterwards, go back to the jigging and rigging and pick up the less active fish.

So what are you waiting for? Get out the warm clothes, forget about winterizing the boat right now and get out there man, there's "Falleyes" to catch. It beats raking the leaves and besides, wouldn't a nice mess of fresh fillets go down good right now?