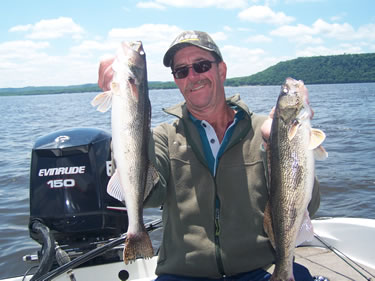 It's here or very near! Wherever you live in the Midwest, walleye season is open or very close to opening. The next few weeks will see lots of anglers trying to catch walleyes. Here are some ways to increase your odds for walleye success early in the season.

Early in the season the water is cold. Walleyes like slow moving baits in these conditions. We can present a bait slowly several different ways.

Early in the year, we're going to be finding lots of walleyes in water less than ten feet deep, with the four to seven foot range being particularly good depending on the body of water. We'll be doing a lot of casting.

Probably the most popular early season walleye presentation is a jig/minnow combo. Walleyes like jigs and minnows year 'round, but they're especially productive in the spring.

A dragging retrieve with your jig will be a good place to start. Many experienced jiggers like a stand-up jig when they're using a dragging retrieve. A stand-up Fire-Ball jig would be an outstanding choice. Cast it out, let it sink to the bottom, then let it sit there a second or two. Move it a couple of feet and let it sit there again. With the stand-up head, the minnow will be wiggling its tail right in the walleye's face. Usually the walleye will eat it.

Another presentation that works well is a very simple split-shot and hook set-up. Again, this presentation can be worked slowly. Cast the rig to what you believe to be water that is holding 'eyes and work it back to the boat slowly. If there are two anglers fishing, one should throw the jig, the other the split-shot rig. See what works best.

The same six pound test is also good with the split-shot set-up or slip bobber, but some anglers go to four pound test when the walleyes are being super finicky. Four pound test is a little too much adventure for me when it comes to walleyes, but it can be the difference between getting a few bites and getting no bites.

Walleye season is here, try the ideas above and you'll be on your way to early season walleye success.