By Ted Pilgrim - May 1, 2009
For trophy panfish sleuths today, it's all about staying two steps ahead of the pack; going where crowds of anglers haven't been for a while. Sometimes, it's a simple matter of circling back to lakes that were hot several seasons back. But from a broader perspective, the game has changed. Most of the smaller, more obvious lakes have been plucked of their panfish gems. Sad but true.

Fortunately, there's a golden alternative. These are waters that grow 'gills and crappies of ponderous proportion; where panfish live obscure existences, free from hooks and lines. 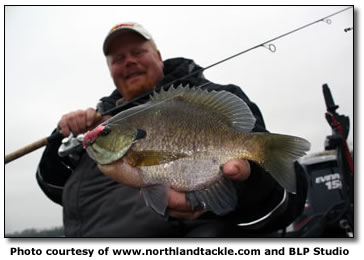 Before we continue, though, we've got a deal for you-a rare opportunity, in fact, to join that select group of insiders who always catch big 'gills and crappies. We promise to reveal some real nuggets of knowledge, going so far as to virtually guarantee big panfish in your boat. In return, though, you've got to promise to release every big panfish you catch-any sunfish over 8-inches goes back; all crappies over 11-inches, photographed and recycled. Do this everywhere you fish, and soon, those brute pans of the past will return in droves. Deal?

Ok, so here's our end of the bargain. Rather than focusing on small lakes where panfish are easily found and exploited, the secret today is to sniff out those undisturbed pockets of "humpheads" swimming within large bodies of water. Lakes of at least 2,000-acres are where it's at-we're talking big lakes better known for walleyes, pike and muskies than bluegills and crappies. A true indicator of colossal panfish is the presence of trophy-class walleye, pike and largemouth bass. If the lake is renowned for heavyweight predators, its potential for brute 'gills and crappies increases exponentially. Clearly, big lakes grow panfish big, and hide them well.

So where to begin? In expansive waters, the location question can at first feel a little intimidating. "The truth is," reveals professional guide Tony Roach, a confirmed panfish sneak, "finding panfish in big water is really pretty simple. Break out a lakemap once. Look at the lake's basins. Most big lakes contain multiple basin sections-or 'lakes within lakes.' Often, you can completely eliminate the deeper, more structurally complex sections of the lake. Leave these areas to the walleye guys." Soon, Roach says, you've narrowed things down significantly, and can zero in on 100-acres of water, rather than several thousand.

"What you're looking for are shallower, gradually sloping basin sections where bottom is no deeper than 30 feet or so," states Roach. "Consider undeveloped shorelines where stands of hardstem bulrush, wild rice and water lilies grow. These are potential spawning areas, and panfish in large lakes often poke around these areas all season long.

"In other big lakes," he divulges, "smaller isolated bays draw most of the early season panfish, which is no real secret. Directly after ice-out, though, panfish often remain just outside the mouths of these bays, until water warms sufficiently. In main lake areas, consider starting the search near broad points housing bulrushes or other attractive plant species. On many spring days, I'll just crush big 'gills and crappies in the main lake, while I watch teams of boats crowd shallow bays without success.

On big water, the deal for Roach is to move and cover water actively until schools reveal themselves. This is no time for sitting back and waiting for bites with a float and livebait. "In these shallower basin areas near spawning habitat, I like to drift down the shore, casting into water ten feet or less," he says. "Wind is the reality in spring, so don't fight it. Identify good drift paths, and start casting little jig-plastic combos. These new bug-imitating micro plastics from Northland have been phenomenal. In fact, when I'm searching, I rarely use livebait."

Roach continues: "The little Mimic Minnow Fry is one of the best new crappie plastics I've ever used, particularly the 1-1/2-inch size. This thing is a beautiful micro-minnow imitation-I call it my crappie vacuum. If there are crappies around, it always finds 'em. Spool with 3- or 4-pound test monofilament, using a 6-1/2- to 7-foot light action spinning rod, and just start straining water. Cast, and swim the jig back slowly. It's important, meanwhile, to closely monitor your sonar, which often reveals patches of low-growing vegetation, and of course, panfish schools. 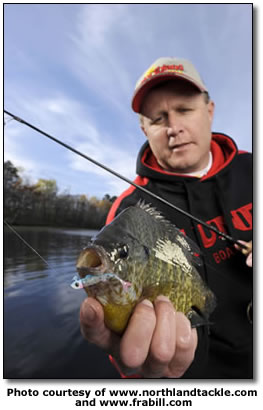 "Same deal with bluegills," he states. Move until you find a school. They can be wanderers, too, slowly traveling across shallow flats or along subtle edges until they encounter cover, like new weed growth, or forage.

"If I'm getting nipped with the Mimic Minnow Fry, but not hooking up, I'll switch to a #8 Bro Bloodworm. A lot of anglers think these baits are for ice only. Tell you what, coupled with light line these little morsels work beautifully in open water. The tiny ribbon-like tail flutters and kicks exactly like the micro invertebrates bluegills seek. I have yet to see a plastic that so closely mimics these natural panfish foods."

Once a school reveals itself, Roach believes, it's sometimes beneficial to drop an anchor and work 'em over. He relies on the same plastics he used for searching, but as bites slow, Roach scales down, switching to 2-pound test and baits like a #10 Bloodworm, or Scud Bug, another Northland creation.

Further, when dealing with humpheads on super light line, many anglers choose to net panfish, a rare practice. Frabill's Sportsman Tangle-Free Rubber landing net is the ideal bluegill-crappie net- an insurance policy against loosing big photo-worthy slabs at the boat.

"Casting and free swimming a jig-plastic combo is just such an enjoyable way to find and catch large panfish on bigger water. These big lake slabs are almost a different animal, thick-bodied and super aggressive." With a grin, Roach observes, "It's funny how often I'll watch walleye and pike anglers drift on by who never imagine I'm on pods of huge 'gills or crappies. They're not even thinking about panfish on these lakes, which is just the way I like it."