By Bill Schultz - April 1, 2009
Back in early February, I had the pleasure of fishing for butterfly peacock bass southwest of Ft. Lauderdale with Wisconsin friend Steve Starr. During the heart of winter in Wisconsin, it was a wonderful treat, and I had the good fortune to catch an 18" peacock bass. If you would like to read about that day, check out the article, "Road Trip Peacock Bass," from last 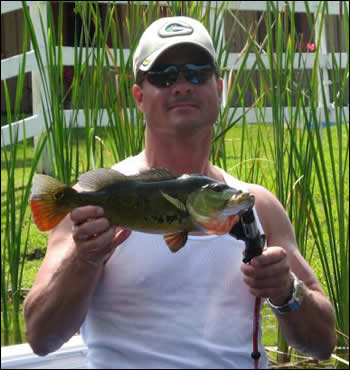 After fishing the canals and small lakes in Steve's Wildnernes Systems sit-on-top kayaks, I was looking forward to giving it another shot. I was hoping for sometime next winter, but fortunately for me, a work-related trip took me back late last month.

So, on Sunday, March 29, Steve and I hit the same system of canals and small lakes that we fished on Feb. 8. This time, the weather leading up to the day had been seasonably warm. We were on the water by 9:30 a.m. and caught quite a few smaller largemouth bass and one peacock by noon. We were hoping for the sun to join us, but a weather system gave us only a few peaks. As Steve told me in February, having the sun is what we need for the peacocks to become more active.

Just after noon, Steve caught a nice 14" peacock. About 20 minutes later the excitement level jumped. I caught my early peacock on a Smithwick Devil's Horse in bull frog, which interestingly had the same coloration as a peacock, right down to its yellow circles, like the one seen on a peacock's tail. We were near a bridge, and I was throwing this topwater, hoping for some active fish. On my third cast I was twitching and retrieving it very fast, which is what the peacock's want, when something huge exploded on it. I had something really big on the end of the line. After a few seconds the largest largemouth I had every seen "in-person" flew two feet out of the water and spit the Devil's Horse. My heart sank, and I yelled to Steve that I just lost the biggest largemouth I'd ever seen. 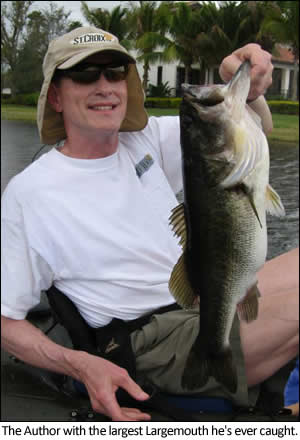 Dejectedly, I paddled over to Steve. After we talked for a few minutes, I decided to try a lure that has worked great for me with both smallies and largemouth since I began using it two years ago. Using a St. Croix 6'6" medium light Avid spinning rod, I tied on a Gopher Tackle mushroom head jig with the Kalin's Grub in blue pearl/salt and pepper. This grub is designed to be fished slowly producing the maximum vibration from the long, wispy tail. I thought after the fish hit something fast and erratic, this would be my best shot. On my third cast to the same location, the monster hit. I couldn't believe it hit again, and I couldn't believe the fight. By this time, Steve was paddling over, and I could only hang on as the 10/4 Fireline Crystal was being ripped from the Bass Pro Johnny Morris Signature Series 1000 size spinning reel. After a couple of minutes of heart-pounding exhilaration, I grabbed the monster largemouth, and Steve and I sounded like Mike Iaconelli during a bass tournament. We didn't measure the fish, but I think you can see from the picture how big it was. What thrill, and needless to say, this was my biggest largemouth ever!

We continued to fish until about 3:00 p.m., when I had to leave for a work assignment. Due to the cloud cover, we didn't catch any more peacocks, but continued catching largemouth bass, including a couple of four-pounders and a few exotic Mayan Cichlids. I kept the Kalin's Lunker grub on one of my two rods, and it continued to be what the largemouth wanted.

The next day, I had a number of work-related meetings, but planned on doing some shore fishing in the afternoon. As we were loading the kayaks Sunday, Steve told me he had the next day off and asked if I'd like to fish with him in the afternoon. Obviously, he didn't have to ask twice. We hit the water at about 1:30 p.m. with the sun shining bright, and this time found the peacocks much more hospitable. Over the next three hours, we caught 15 to 20 peacocks, all in the 13' to 15" range, along with another 20 largemouth. We found the peacocks close to shore and many times in or near the hydrilla. Having caught thousands of smallies, I can say that these fish hit and fight a little harder. Although, as Steve told me, they don't have the endurance of a smallie. These lake peacocks remind me of river smallies that always seem to fight "bigger" than they are. 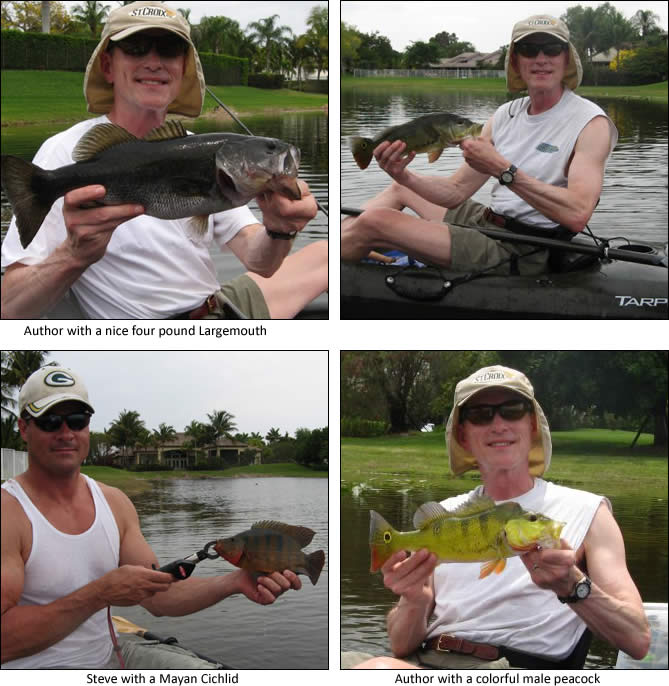 On this day, the lure of choice was a nose or weedless hooked Zoom Super Fluke Jr. in a light color like albino. If you've ever seen Amazon peacock bass fishing on one of the fishing shows, you know how fast a lure has to be retrieved. Steve told me that I had to retrieve the Fluke very fast, with a quick twitching motion. This was faster than I'd ever fished this style of lure, but it worked. They wanted it fast. The largemouth weren't as picky and hit a variety of presentations

After this second road trip for Florida butterfly peacock bass and largemouth, I want to go back. Catching peacocks is fabulous, and the "big" largemouth was a great bonus.