By Steve Huber - November 1, 1999
Ahhhh, November, the time of year when it’s impossible to get anything done. Bowhunting for deer is in full swing, the deer gun season is close at hand and there’s still grouse and waterfowl to chase. Your significant 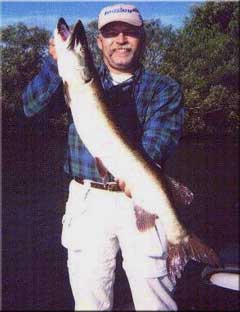 other is “asking" (demanding???) that the storm windows be put on, the leaves should be raked and there’s hundreds of other “Honey Do’s" that should be done. So what’s a guy to do?????, do what I do, go MUSKY FISHING!!! The storms can be put on after dark (that’s what flashlights are for), the leaves will still be there in the spring and well, there’s always tomorrow.

November is for the “hard core" muskie hunter. They are feeding heavily for the coming winter and this is the time of year when you’ll put the heaviest muskies in your boat. November muskie hunting is summed up simply with two words.....Low and Slow. Now is the time for those weighted jerk baits, the big glide baits and deep diving crankbaits. Now is also the time for “dragging suckers". You see, with the water temps so cold, muskies are not going to chase down a fast moving lure, so dig through your tackle box and use anything that has maximum action with minimal retrieve speed. Leave the topwaters and bucktails at home, glide baits like Reef Hawgs, other jerks such as Bobbie baits, and large lipped crankbaits will be the lures of choice at this time of year. A feeding muskie is looking for a large meal that can be easily caught, they want maximum calories with minimum effort now so any lure that shows a large profile and works slow will produce.

OK, now that I know what lures to use, where should I go? Find the lakes or rivers with the warmest water temps, the muskies will be more active. If you can find any green weed beds, fish these areas, otherwise, look for rock bars, mid lake humps and downed timber near deep water. The weed beds that you fished all summer

and early fall will be dying down now and as they die and decompose, the decomposition process uses up most of the available oxygen in the area, so unless the weeds are still crisp and healthy, look for rocks and wood. The muskies will also be deeper now so if you know of any lakes with lots of bars and humps, check out those. That’s the reason for the large lipped cranks, they’ll get down to “where the big ones run." Fast breaking, rocky shorelines will also hold muskies, basically, if you know of areas that are good for walleyes, check these spots for big toothy critters, they like walleyes as much as you do.

Also, if you are not dragging a sucker on a quick strike rig, you are really missing the boat on BIG fall muskies. What I do is keep a rod rigged with a clicker reel, 60 lb. superline, a large slip bobber and 12 to 16 inch sucker on a quick strike rig. The sucker is let out about 10 feet from the boat and with the reel in free spool, the sucker just trails along as the boat drifts. Quite often, a muskie will follow your lure in, see that sucker trailing along and decide, “it needs to eat some meat." For those of you who don’t know what a quick strike rig is, I’ll tell you. It’s a sevenstrand leader with a large, single hook that goes through the suckers lip, a treble hook is also attached to this leader and this hook is slipped under the skin by the sucker’s dorsal fin. That way, when a muskie attacks the sucker, it “usually" is grabbing a hook at the same time. The great thing about a quick strike rig is there is no agonizing decisions..... “does he have the hook in his mouth yet, has he swallowed it deeply, will I be killing a small muskie????" What I do is when a muskie grabs the sucker, let it go until the bobber is running straight away from the boat, engage the reel, let the slack be taken up and set the hook. Most muskies taken this way will be hooked in the corner of the mouth, usually by the treble hook that was in the dorsal fin. These fish can be easily released with no fear of lasting damage.

I had a client earlier this fall, we were throwing for muskies around an still green weed bed when the reel started to scream. The bobber moving like a torpedo away from the boat, I threw it some slack line, let the fish tighten up and did my best “Roland Martin Hookset". I handed the rod to the client, with much head shaking and rolling on the surface, the muskie was fought to the boat, where much to our surprise, it opened it’s mouth and spit the sucker out!! Even with my “Mongo Hookset", the hooks never got near the muskie. The client lifted the much chewed sucker from the water and I quickly said, “drop it back in!" As the sucker hit the water, 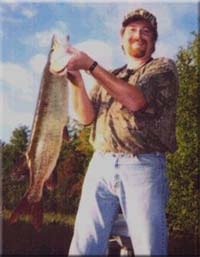 the muskie came flying out from under the boat and slammed the poor sucker again. We let the fish run on free spool about 50 feet from the boat and I set the hooks again.......harder this time. I gave the rod back and again, rolling, thrashing, head shaking the muskie came reluctantly back to the boat. As I got the landing net ready, I saw that the sucker was firmly clamped in his jaws, still with no hooks embedded. I put the net in the water, and watched in amazement as the muskie calmly swam into the net!!!! Needless to say, the client was pleased, I was ecstatic and the muskie was photoed, admired and released unharmed.

If you’ve never tried November muskie fishing, there are several things that you MUST do, first of all, dress in layers, the weather can be “extremely chilly" this time of year. Wear a p.f.d., accidents can happen and hypothermia is “nothing to sneeze at." Swimming, with heavy clothes and boots on is “not bloody likely," so wear the p.f.d. Keep the lower unit of your motor in the water at all times when you’re fishing. Often the air temperature is below freezing and any water in your lower unit can freeze and quite possibly damage the motor. If the motor is in the water, it won’t freeze. When you’re done for the day, after the boat is on the trailer, lower the motor to vertical, let the water drain out and start the motor. Let it run for a couple of seconds, then shut it off. Do this several times until no water comes out of the motor. If you keep the running time short, you’ll blow the water out of the lower unit and won’t overheat the engine. I’ve been doing this for quite some time and.....so far, so good. Also, you don’t need to be out at the crack of dawn and fish till past dark. Fish the middle of the day, when the water is at it’s warmest, go hunting during the early morning and late afternoon.

If you try this, don’t expect to get huge numbers of muskies, just the heaviest fish of the season, remember, muskie season is over at the end of November, you can do that “other stuff" next month.