By Bill Schultz - March 1, 2009
"Simply escaping, albeit briefly, from the Wisconsin winter, and just getting on open water and throwing some lures was going to be fun!"
It's winter in Wisconsin. I'm not an ice fisherman, and I haven't fished open water since late October. The wait is getting to me, especially with our "old time" winters of the past two years. Last year, I had a chance to fish smallmouth bass on the Potomac River around April 1, which helped. Last month, I was in Naples, Fla., running a conference. A friend from Madison, Steve Starr, who now calls Ft. Lauderdale home, said that if I had time while in Florida, to drive over to the Ft. Lauderdale area for some peacock bass fishing. He didn't have to ask twice.

Steve has done quite a bit of smallie fishing in Wisconsin, and in Florida, enjoys fishing for both saltwater species and the freshwater peacock bass from his kayak. Peacock bass were first introduced to the canals of coastal Southeast Florida in 1984. Stocking was discontinued after 1987 when it was determined that natural reproduction was taking place. These bass will not survive in water below 60 degrees, so the canal system, which rarely drops below 65 degrees, was a perfect place for this tremendous game fish. One of the reasons for this is the Biscayne Aquifer that lies just a few feet below ground. In winter, the warmer water flows from the aquifer into the canals and creates the warm temperatures critical to the survival of many exotic fish, including the peacock bass.

The only free day I had while in Florida was Sunday, Feb. 8, so I met Steve at one of his favorite spots southwest of Ft. Lauderdale. Coming from Wisconsin, the day was going to be super, with temperatures reaching about 73 degrees. I knew, however, that the previous week had been extremely cold with nighttime temperatures down to the low 30-degree range, so I wondered how active the peacocks would be. Steve confirmed my thoughts and said the water temperatures were as cold as he'd seen, and that the fish likely would not be overly active.

Simply escaping, albeit briefly, from the Wisconsin winter, and just getting on open water and throwing some lures was going to be fun. But being the smallmouth bass enthusiast that I am, I really was hoping to catch at least one peacock bass to compare the fight of the two species. Steve had given me good directions, and the GPS had directed me almost to my exit off of I-75, when a black SUV pulled along side of me with two kayaks on top. Good timing. It was Steve, and I followed him to our launch site. 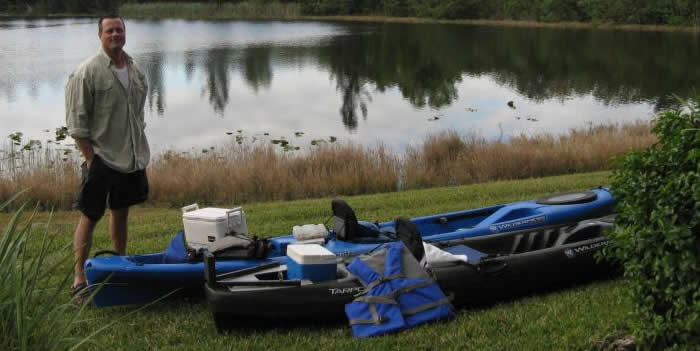 Steve fishes from a 13' sit-on-top kayak and had a 10' one for me. Using the sit-on-top was an extra bonus as I'm looking to get kayaks for my wife and I so we can spend more time on Wisconsin rivers and those small lakes in southeast Wisconsin that are carry-in only. From everything I've read and heard, the sit-on-tops are the way to go, and after spending the day in one, it's easy to see why.

We were on the water by 9:30 a.m. and began our quest to catch some peacocks. Almost immediately, Steve correctly predicted our only chance would be if the sun popped through 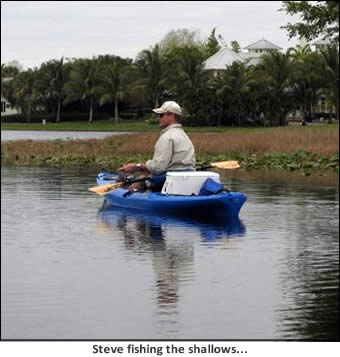 the overcast. When we talked the previous week, he also told me how the peacocks respond to very fast retrieves and that reels with a fast retrieve ratio were best. Even though he had rods and reels for me, which included St. Croix medium action Avids, I brought along one of the "new" Shimano Symetre 2500 reels I had been itching to use. Steve also mentioned some of his favorite presentations, so I brought Kalin's Grubs, Super Fluke Juniors, Heddon Tiny Torpedos, Booyah Pond Magic Buzz Baits and XCalibur XR50 Rattle Baits. And, over the next two and a half hours, I caught fish on each style of lure. But, no peacocks. Just a bunch of small, largemouth bass. How could I complain, though? I was out of the Wisconsin cold and kayaking beautiful canals ringed by some very impressive homes.

I told Steve that I had hoped to do a "road trip" article, but we needed to catch at least one peacock for a picture. Well, at about noon the sun began to peak through the clouds and from across the canal, Steve motioned me to come over. We had our picture fish, but it was only an 11" peacock. I was hoping for something a little bigger. Steve caught the little guy on a Super Fluke Junior. We continued to fish, talk and enjoy the increasing sunshine, when Steve hooked into a nicer peacock on a topwater lure. After a short fight, I had a picture of him with a nice 15" bass. I also had a couple of monster hits that had to have been peacocks. Unfortunately, no hook-ups.

We planned to be off the water by 3:30 p.m. and were at the last spot Steve wanted to hit. It was in and around a small bridge over the canal coming into the subdivision. Just as we paddled under the bridge, I cast a nose-hooked Super Fluke Junior, gave a couple of quick twitches when I had a hit that felt like a freight train. It was obviously a nice peacock and what a great fight. I had my peacock bass, and it was a beauty at 18". I can't remember too many 18" smallies hitting that hard, and the fight was just as hard as I'd been told it would be. Steve has caught many smallies and says they have more endurance.


It was a superb day: six hours on this beautiful system of canals, a bunch of smaller largemouth, a great 18" Peacock and a diversion from the Wisconsin winter. I'm already looking forward to getting back. Steve told me that on a normal day, without the week of cold weather, we would have caught 40 to 60 Peacocks. He said he hardly ever sees other anglers, but as we were leaving, we ran into a woman fly fishing from shore. Like us, she was having a slow day, but confirmed what Steve had said about the numbers on a normal day. She also told us that she had recently caught a 7-pounder. I can only imagine what that would be like.

If you're going to be in Florida and are looking for some exiting action, you should give the butterfly peacock bass a try. You can get quite a bit of information by googling Florida peacock bass.

Bill Schultz
Bill Schultz lives in New Berlin and Sturgeon Bay, WI, and is a contributing writer for several magazines and web sites. Since catching his first smallmouth bass in 1994, he has caught and released over 24,000. His focus has been on the big waters of Green Bay in and around Sturgeon Bay, along with rivers and streams throughout Wisconsin. Catching and releasing smallies and sharing his recipe for success has become a passion for him. Bill is on the Pro Staffs for St. Croix Rods, Mercury Marine, Yar-Craft Boats, Jackson Kayaks, Bending Branches/Aqua-Bound Paddles, Kalin's, Keitech USA, RAM Mounts, Cedar Lake Sales and Malone Auto Racks/Trailers.
TRENDING DISCUSSIONS
Advertise here