By Steve Ryan - February 1, 2009
Most claim that it doesn't exist. Others whisper in low tones about its possible location. Notes are passed. Satellite images studied. GPS coordinants exchanged.

Like chasing the end of a rainbow, the end point keeps shifting. Some prospect the feeder creeks of the Yukon River in Alaska. Others claim it must be in Ireland's fabled sloughs or Sweden's vast Baltic Sea region. Still others ponder if it's a little hidden gem in their own backyard. 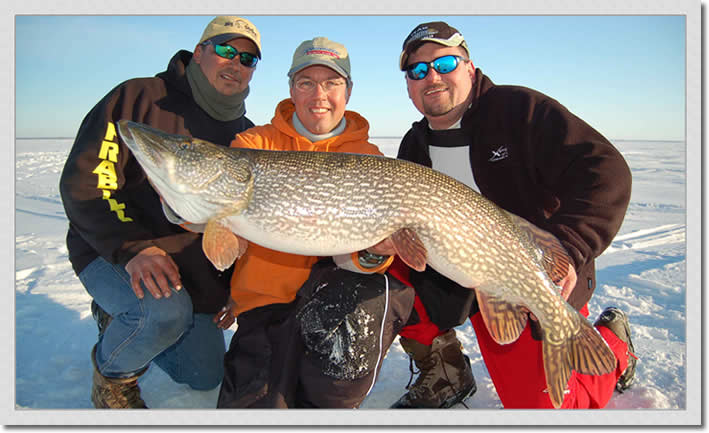 Having experienced northern pike nirvana last March, I can tell you that it does exist and I will even share its location with you. For dedicated pike anglers, it's a fairly 'easy' one day travel from most places in North America. It's a place that will change your perception of big pike.

My own search of pike nirvana began as a kid fishing some of the best lakes and river systems throughout the Midwest. Later, it meant exploring the northern reaches of the Canadian provinces and Alaska. Float planes replaced trucks as the standard mode of transportation. Beaver dams were the closest thing to local infrastructure that one would encounter during a week long fishing expedition. Each location had its own potential and most give up good numbers of 38-42" pike during prime periods, but travel logistics made them impossible to fish year round - especially during late winter when these fish were at their top end size.

"Of the fifty-four pike we landed, a dozen were forty inches or bigger...."

Call it the curse of monster pike. There is something about these 'water wolves' that keeps anglers hunting for bigger and bigger pike. Sure typical Midwest pike averaging 22-33" provide plenty of action, but at 34-38" the fighting ability of these fish becomes that much better. Still, you want more. From 39-43", these fish take on a new dimension. They grow shoulders and an attitude. From there, those rare 44-50+" pike are hunted as singular prey.

The game plan and equipment becomes that much more refined. One enters legendary territory as dedicated pike anglers pursue their holy grail - thirty-pound plus pike. These are the fish you remember for a lifetime and cherish the tiniest details of the catch. A location with numbers of fish in this top end size is what all serious pike anglers seek.

While fishing in Northern Saskatchewan last fall at Wollaston Lake Lodge - one of the premier producers of giant pike - I had the good fortune to meet one of their top guides, Kurt 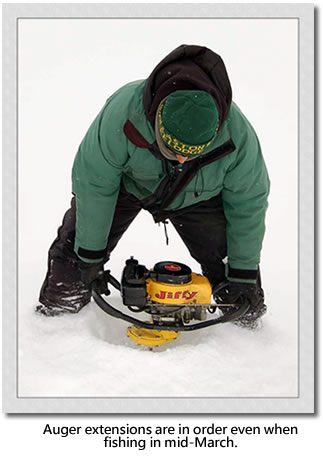 Stein. Kurt is a northern pike afficionado. Not only had Kurt quietly located northern pike nirvana; he also lived and guided there during the 'off-season'. Kurt showed me some video footage from the prior season of one huge pike after another being caught through the ice. Giant pre-spawn pike from 18-33 pounds being caught and quickly released back to pike utopia. At that moment I knew where I would be next winter - Tobin Lake.

Situated in Northeastern Saskatchewan, Tobin Lake is a large impoundment of the Saskatchewan River. With trophy management in place, Tobin Lake ranks among the top lakes in North America for record walleye and northern pike. In its short twenty year history, Tobin has already produced several provincial record walleye to 18.3 pounds and pike to nearly forty pounds.

Kurt has been fishing these shallow fertile waters for nearly a decade and has operated Big Strike Outfitters for more than five years. Pike are his passion and he has a keen knowledge of their habits, movements and feeding behavior. With the aid of a detailed log book and GPS coordinants of small irregularities in the lake's bottom, Kurt is always one step ahead of the pack in his pursuit of some of the biggest pike on the planet.

Planning for the trip was simple as Kurt is outfitted with all the necessary gear, including reliable snowmobiles, quick cutting 10" Jiffy augers, Frabill Big Foot tip-ups and comfortable Frabill shacks. To coordinate the trip, a search of the Saskatchewan Tourism website gave us an overview of the area's countless accommodations, attractions and activities. With several daily flights to Saskatoon connecting through Toronto, Winnipeg, Minneapolis and Denver, the flight plans could not have been simpler. From there it was a smooth 3.5 hour drive on paved highways to the lake.

Leaving early from Saskatoon on the first day of the trip, the morning air was 'crisp', while the forecast called for midday temperatures in the thirties. The retreating snow drifts and longer days foretold spring's pending arrival. Driving north, the rural landscape calmly rolled out before us. Watching the scenery go by, one could easily imagine spending several weeks here exploring all that the region has to offer, including snowboarding, cross-country skiing, snowmobiling, world class hunting, visiting historic sites and enjoying cultural events. However, after Kurt told us that his fishing partner, Joy Hanson, had caught and released two thirty-pound pike in the last week, our focus was set on one singular purpose - catching giant pike.

Each lake has its own charm and Tobin Lake is no different. Arriving midmorning at Tobin Lake, the lake seemed peaceful. Draped in a heavy blanket of snow, only a few small 'ice fishing shanty towns' interrupted this vast field of ice. Sprawling from east to west, the lake appeared to go on forever. With limited shoreline development, one quickly felt the remoteness of the location.

Our plan was to try something different for this trip. Kurt had advised us of the town's many fine accommodations on the shores of Tobin Lake. However, since the travel time from the lodging to Kurt's favorite fishing locations was 45-90 minutes by snowmobiles, we talked about the possibility of staying on the ice for the entire three day trip. Kurt gave his approval and with a little extra planning on his part, a plan was set into motion. 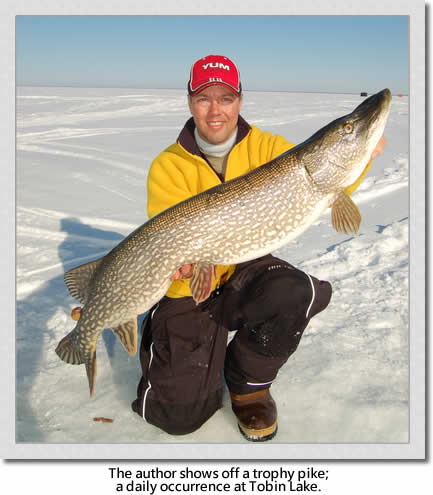 With multiple Frabill shacks at his disposal, Kurt quickly arranged for a comfortable lodging shack where we would sleep and have meals. A separate shack would serve as a 'dark house' for sight fishing pike and a third shack for any personal business. While we gladly accepted the role as 'guinea pigs', there was nothing remotely close to roughing it on this trip. From comfortable bunks, warm heaters, great home cooked meals ranging from eggs benedict, bacon, sausages and blueberry pancakes for breakfast; to traditional shorelunch, delicious brats and burgers on the grill for lunch; to chili and pizza pike for dinner, along with nightly desserts and cocktails to cap it off, we could not have asked for better accommodations or more perfect hosts.

Not only did the stay on the ice afford us extra time to fish but it also eliminated the hassle of breaking down camp each evening. Our whole schedule became much more relaxed, and it enabled us to soak in the peacefulness that Tobin Lake has to offer. This included stunning sunsets, spectacular northern lights and a night sky saturated with stars. And the fishing - simply incredible.

On our first day of fishing, we literally had fish taking baits before we could set up our full allotment of tip-ups. And on the last day, we were landing giant pike as we tried to pack up our gear. In between, we had steady, consistent action with big hard fighting pike. We landed precisely eighteen pike each day of the trip and lost several monster fish throughout the course of the trip. Of the fifty-four pike we landed, a dozen were forty inches or bigger. With the tremendous girths on these pre-spawn fish, all were well into the twenty-pound range and thirty-pound fish seemed to be within reach at any time.

Even the average 36-37" fish were a thing of beauty with their thick backs, clean markings and rich colors, including hues of purple and green that are trademarks of Tobin pike. On the last day of the trip, there was no disappointment or regret, just a content, satisfied feeling that we had experienced northern pike nirvana first hand. With strict management regulations in place at Tobin Lake, we knew that we would be back to experience this special place again and again. To learn more about the area and other Saskatchewan attractions contact www.sasktourism.com; (877) 237-2273. For fishing opportunities, Kurt Stein can be reached at www.bigstrike.ca; (306) 862-2620.