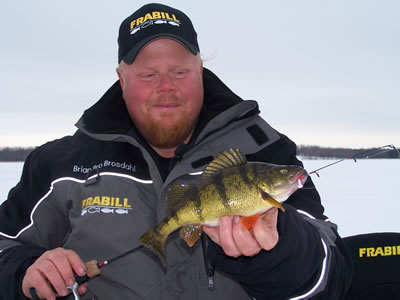 We've had a lot of wind this year. If you're fishing from a portable shelter on a windy day and you need to leave the shelter, don't leave the tent part up: Fold it down. Portable shelters that are lightweight are desirable for pulling across the ice, but they also blow across the ice very well if the shelter is left in the upright, fishing position. On those days when the wind gusts up to thirty miles an hour, these shelters move really fast across the ice, and they bang into anything that gets in their way. I'm glad we were on a small pond when I re-discovered this ice-fishing fact.

Gulp! is becoming a bigger part of an ice-anglers arsenal all the time. When perch are feeding on blood worms, a Gulp! Mini Earthworm in the Red Wiggler color is killer. Use just an inch or two on a spoon or jig and put it where perch live. You'll catch lots of fish per bait. Gulp! is tough stuff and the fish like to eat it.

Keep your bait above the fish. Get them to come up to your bait to eat it if possible. If they won't come up to eat the bait, you'll need to lower it to their level. However, lower it slowly. If it falls into their strike zone too fast, they'll often reject it. I have yet to see a situation where it is productive to have the bait below the fish.

The only way to tell where your bait is in relation to the fish is with sonar. I've been using the new Humminbird ICE 55 for about a year now, and it is doing a great job. Lots of features included in this unit make presenting a bait so much more effective.

Fleece is great stuff for ice-fishing. I have a Cabela's Outfitter Fleece parka that is warm, quiet, and feels so good to wear. It has become my favorite garment for cold weather.

There are a few ice-fishing ideas to think about. Now I'm going to go out and learn or re-learn some more.