By Steve Huber - January 1, 2000
It's always with great anticipation that I approach the first ice fishing trip of the season. The question is....."What do I go after....and where?" I mean, up here in northern Wisconsin, there are sooo many lakes to choose from. If you've ever looked at a map of Oneida county, there is almost as much blue as green. And each lake seems to be just a little bit better for one type of fish than another. Some lakes produce walleyes, others really crank out the northern pike (which I dearly love to fish for), others are real panfish factories. So you can see my dilemma.

I decided on walleye fishing, and being the highly organized fishing machine that I am, figured

my missing equipment locator. "Janet, where are my tipups?" With a look of long suffering, mixed with a dose of pity for my failing memory, she told me to look under the swimming tubes in the corner of the garage. (Yeah, I knew that!)

I pulled off the old line and replaced it with some of last year's muskie line from my reels (which is a great way to use old line and make sure that fresh line is on your muskie reels). 36 pound braided Dacron makes a great mainline for tipups, it's easy to handle with gloves on, and doesn't tangle easily. I then put a slip bobber knot on the mainline as a depth marker. I used to use small, clip on bobbers, didn't like them as they were kind of bulky and touchy walleyes would sometimes drop the minnow if the bobber caught on anything. I tried buttons but found the same thing, especially when fishing weedbeds, the button would catch on weeds, end result......no fish. Then, I thought of slip bobber knots, they can be moved up and down the line easily and they don't catch on anything.

To the mainline I tied a #10 barrel swivel and to that went a SevenStrand leader. When fishing walleyes, I normally use a 6 to 10 pound test mono leader but this area has northern pike and muskies, monofilament lasts as long with them as french fries do with my brother in law. I've found that if you use 8 to 12 pound test SevenStrand, the walleyes still bite but I don't get cut off nearly as often as I used to. To this leader went a #10 treble hook, I'm a firm believer that the reason more people don't catch more walleyes is that they are using too heavy equipment. With SevenStrand and small hooks, the minnows have more natural movement and live longer on the hook. The walleyes also take the bait more readily if they don't feel a heavy hook.

We decided on a bay off of the Wisconsin River, near Tomahawk to do our last trip of the century. My friend Gil and I arrived around 3:00 and started drilling holes. We began drilling in shallow water, on a shelf that still has green weeds. From this point, we drilled out about every 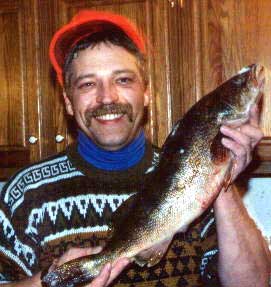 20 yards or so, until we were over the main river channel. We set tipups from shallow to deep, putting a tip-up in every other hole, planning on jigging in the unused holes. We set the bobber stops on the line so that when the bait was about 8 to 12 inches from the bottom, the bobber stop was just on the spool. Once the tipups were set, I grabbed my jigging rod, tied on an orange Jigging Rapala and clipped on my lead depth finder.

Before I could even get the bait in the water, Gil had a walleye on. I went over to watch him land the fish and wondered how I could knock the fish off the hook, making it look like an accident (hey, what are friends for?). It turned out to be a chunky 14 incher and was released. I went back to my jig rod and before I could get the lure in the water, I watched a flag go up on one of my tipups. Another 14 inch chunk of walleye came up through the hole and just as fast, went back down. I re-baited, re-set the tip-up and went back to my jig rod. I was beginning to think that I'd never get to use it. I finally got the lure in the water and dropped it to the bottom. I set the bobber stop depth marker on the reel and began to reel it up. I was thinking, "Man, does this jigging Rapala pull hard", when it dawned on me.......Set the Hook!!! I had a walleye hit the lure, with a lead depth finder attached!! I managed to get the fish landed and unhooked when another flag went up. When I set the hook, I felt a heavy fish shake it's head twice, then......nothing. Man, I wish I could have seen what that was, whatever it was, it was BIG!! We ended up getting 5 flags, landing 4 fish and had a great time. Not bad for 2 hours on the ice.

The locations that we were fishing were classic "early ice" walleye spots. If you can find deep (deeper) water near a shallow, weed covered food shelf, try fishing this area. Do like we did, if you have enough tipups, set them from shallow to deep. Let the walleyes tell you where they are and what they want to eat. This particular day, we had both medium suckers and medium shiners put out. The suckers were totally ignored and the shiners were the bait of choice for the day. It's a good idea when icefishing for walleyes to have an assortment of bait along. No species of fish that I know of in northern Wisconsin is more finicky than a walleye and they will show a definite preference for bait. Unfortunately, their preference can change from day to day, I'll bet bait shop owners love walleyes.

So hey, now that the ice conditions are getting better, find your tipups, get some friends together and get out for an afternoon. That's what I like about this time of year, make sure that you're out on the ice by mid afternoon, fish till an hour after dark, in an area like I've described and you should have all the walleyes you need for a nice fish fry. Besides, all the T.V. shows are re-runs anyway.