Women On The Ice

By Barb Carey - January 1, 2009
I feel like a pioneer. Not because I'm aging and about to turn 50 but because I am one of few women I know that have a passion for ice fishing. As I began to become more involved in the sport I realized it isn't to often that you run into other women on the ice. Once in awhile a Dad would have his daughters out. I always tried to pay attention to the girls to see if Dad had provided them with a pole or if they were playing in the snow. I always smiled when I saw a little girl holding her pole starring at the hole with anticipation. Or better yet when they run towards a flag as fast as they can. I hope Dad lets her take the flag.

Then there is the occasional husband and wife team. Usually the female half of the duo looks like she knows what she is doing. I have to admit I always look at what she is wearing. Not to judge the fashion but to she what she has found to wear that is warm and functional. You just don't go to the Women's Ice Fishing Clothing section and pick something out. Its more like hunting for the right thing but its just not available. I found these pants once that were great. It was like wearing pajamas, with nice pockets, warm, windproof and water proof. The fact that they were "wetland camo" didn't deter me but I have to admit when ever I see myself in the photographs holding fish I cringe at the sight of them. They look terrible on me.

Another annual female visitor to the ice is the teenage male's girlfriend. Now these women are obvious. This is the gal who walks to the shack with her short cropped pretty jacket and low rise jeans. Some times they wear boots but often times its just the tennis shoes. Lucky the shacks are close to shore but I often wonder if they are the ones spreading the rumor that you freeze your tail of if you go ice fishing. 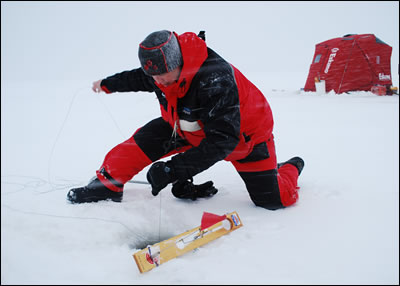 Then there was the time that my friend and I were bundled up from head to toe. This was before the advent of the light weight high tech gear that we wear now. We had so many clothes on we could hardly walk and the only thing showing was our eyes. We started walking out onto the ice and passed a couple of older men who were just walking off the ice. They proceeded to tell us " good luck ladies". I was shocked. How did they know we were ladies. We were wearing men's Carhardt clothes and looked to be wearing the same outfits they were. Now I'm a big girl so it wasn't because of my small frame or dainty boots. I don't know how many times I have been in dress clothes in a business establishment and while going to the restroom I get looks as my gender neutral look often confuses people. So these old ice fishing gentleman knew that we were ladies I will never know.

I must say I rarely see a women out ice fishing by herself. If fact I never have. I'm not saying it doesn't occur, I know I do it, and I have friends that do, but I have never personally seem a women ice fishing by herself. I didn't realize what a novelty it was. One day while fishing on Lake Petenwell, I was talking to some men who were also fishing. They asked me if I was "Keepers". I admitted I was, That's actually my dogs name which I have been using as a screen name on Lake Links and other fishing reports. I thought it was funny and didn't think to much of it until it happened again on Lake Superior. Now here I am 275 miles from home and the first time I am fishing these waters and some guy asks me if I'm "Keepers". Suddenly I looked around and think "Am I the only women in the world that ice fishes?" What are the chances of seeing that one women on the ice in the middle of nowhere being me the same women who posts on a fishing web site. Sadly the odds were real good. I knew that day that I had to do something about that and let other women know what they are missing. And then WI Women Fish was born. So maybe someday when you Google women's ice fishing, something other than the Bikini Ice Fishing Team will come up on the first page.

Barb Carey
Barb Carey is the founder of WI Women Fish and been organizing fishing outings for Women since 2003. She is currently a WI licensed fishing guide, an Ice Fishing instructor for Becoming an Outdoors Women, and has written ice fishing articles for magazines. Prior events produced include Women's Ice Fisheree's, the annual Women's Fish Camp and several spring walleye excursions. Barb is on the pro staff of Jiffy Ice Drills, Lighthouse Tip Up Light Company and is a rep for Eskimo Ice Shacks. Barb holds several community volunteer positions and lives in Madison WI. WI Women Fish web site can be located at www.wiwomenfish.com.
BITS & BITES
Advertise here
Advertise here
Please take a moment to visit our sponsors. Without them we would not be here.