Mobility On The Ice

By Bob Jensen - January 1, 2009
As we get farther into the ice-fishing season, things change a bit. We still need to put our bait in front of a fish if we want to be successful, but we need to be a little more aggressive in our search for fish. 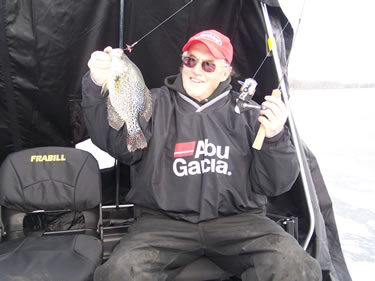 Early in the season, because of thin ice and minimal snow cover, the fish can see activity above them very easily, and that can make them spooky. The less activity the better, which means anglers should move around less.

As the thickness of the ice increases, and as we get more snow, it's harder for the fish to detect activity above them. They also probably get conditioned to the noise and movement, so they aren't as easily spooked.

Because the noise and motion isn't as objectionable this time of year, it will generally be helpful for ice-anglers to move around more on the ice. We want to be going after the fish, not waiting for them to come to us. With some of the innovations in ice-fishing products in recent years, it's easier for us to go looking for fish.

Probably the most important tool for looking for fish under the ice is a sonar unit. Many anglers will pop a good number of holes, then go from hole to hole looking for fish with the sonar. They don't drop a line until fish are detected on the sonar.

Humminbird recently developed a line of sonar units. The Humminbird ICE 55 has a feature that changes beam coverage area. Some anglers, when fishing deeper water, prefer to use the narrow beam. This shows if a fish is directly below the hole.

If there is nothing directly below the hole, it is a good idea to switch to the wide beam. To do so just requires the push of a button. By switching to the wide beam, you can determine if there are fish in the area. If there are, you can either try to lure them to your hole, or you can concentrate in the general area. These new Humminbirds have a lot of features that will enable an angler to be more successful on the ice.

If you want to be mobile, you'll need to be able to travel from hole to hole easily. Some anglers carry their stuff in a bucket, others prefer a portable shelter. With the portable shelter you can easily take your auger, sonar, and a selection of rods and baits with you as you move around. They also provide shelter from the elements. The Frabill shelters provide comfortable seating, and the new R2-Tec is the warmest portable shelter you'll find.

So, as you go from hole to hole looking for fish, don't spend too much time unless there are fish below. As mentioned earlier, some anglers don't drop a line until they see fish. Others will give a hole five minutes, then move on. That's a decision an angler needs to make. However, from now until the end of ice-season, you'll catch more fish if you're mobile on the ice.