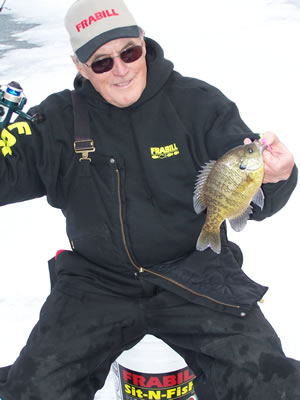 When I drove by the local pond this morning, it was covered with a skim of ice. Certainly not enough ice to support a person, but nonetheless ice. This is the earliest I've seen ice on the pond for a long time. Maybe that indicates an early start to ice-fishing this year, or maybe not. It's a good reminder though, that now is the time to be thinking about early ice tactics. Panfish are an early ice favorite for many Midwest ice anglers. Here are some ideas as to how you can catch more bluegills, crappies, and the like through the ice as soon as that ice is safe to walk on.

It is the belief of many accomplished ice-anglers that the number one factor for early ice success is keeping quiet and still. Of course you have to be in a fishy area, but we're assuming there are fish around. If you want to catch fish, you can't let them know you're around. Remember that those fish are directly below you. They are probably only a few feet away. Also remember that most fish can see up pretty good. Mother Nature built fish so they could see above them effectively because many of the things that eat fish come from above, like birds. A fish's eyes are on top of its head so it can see those potentially dangerous things from above as they approach.

So, because you're on the ice above the fish, they can see you if you move. Keep movements to a minimum. At some times of the year, mobility is a good thing. Early in the year, find your spot and stay there. Don't move around any more than you need to. That doesn't mean you need to fish the same hole all day, it just means you should give it more than a few minutes.

Early in the year, there might be some areas on the ice that are snow covered and others that aren't. The snow will camouflage your movements and can be a good place to fish.

Even though the weather might be mild, many anglers still prefer to fish from a shelter. The shelter will hide the movements of the angler. The fish can see the shelter, but they can't see you moving in it, especially if the shelter is dark. Most Frabill shelters are dark and will prevent the fish from seeing you move. They're also super comfortable to fish from. Light line is a plus when the fish are skittish. Two or four pound test Berkley Vanish is invisible underwater. It will help you put more fish on the ice when they're skittish.

Much of our early ice action will be sight-fishing: You will actually watch the fish approach and, hopefully, eat your bait. If they're doing more approaching than eating, you've got to do something different. Sometimes less action on the bait will be better; sometimes a change in color will produce. Much of the time it will pay to go to a smaller bait. Regardless, if what you're doing isn't working, do something else.

As soon as the ice is safe, get out and take advantage of the great action early ice offers.