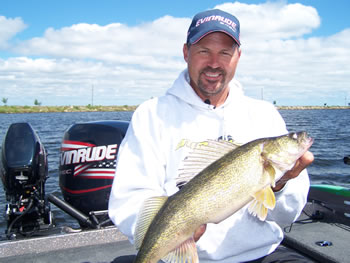 For many anglers, the 2008 open water fishing season is quickly winding down. Many folks who like to go fishing also like to hunt, and right now is about the only time they can go hunting. There are also a lot of other activities that can conflict with fishing this time of year. While the opportunity to catch lots of fish and big fish is great right now, unfortunately there aren't a lot of anglers on the water in most Midwest locations. Now is when I like to reflect on the fishing season that has just passed. It is amazing how much we can learn from every fishing season no matter how much fishing experience we have.

One thing that I learned this year is that swim baits can be extremely productive. Swim baits will catch most predator fish that swim in Midwest waters, but they are mostly used for largemouth bass. Swim baits are minnow shaped soft baits that are worked kind of like a crankbait. They are fairly new to most Midwest waters. In fact, I would bet that the bass in many Midwest lakes have never seen a swim bait. On the lakes where I used them, the bass hit them harder than they usually hit a bait. The strike was vicious, and the bass had the bait all the way in their mouth. You rarely missed a fish that hit a swim bait. The swim baits that I used with the most success were the new Hollow Belly swim baits from Berkley.

I've never been real big on technology in my fishing. As every fishing season goes by however, I more and more realize that some technology will help us catch more fish. The advanced features on some sonar units are becoming easier to figure out, so I'm using those advanced features more.

Netting fish has become the best way to land fish. Some anglers used to prefer to land fish by hand to protect the fish. In the past, nets damaged a fish's skin and fins. Since Frabill has developed new conservation nets, damage to the fish is reduced markedly. It's better for the fish if we can land them and get them back in the water faster. Nets allow us to do that. Nets also protect an anglers hands from hooks on the baits that the fish has in its mouth.

Every year we should try real hard to learn more about fishing if we want to continue to be successful. The ideas just mentioned helped me enjoy my fishing more this year, and will help you enjoy your fishing next year if you implement them.