By Tony Dean - October 1, 2008
It seems hardly a day goes by this time of year when I fail to get an email asking about how to set up decoys in fields. Many hunters seem to be under the mistaken impression there's a magic spread or formation that will lure the birds. 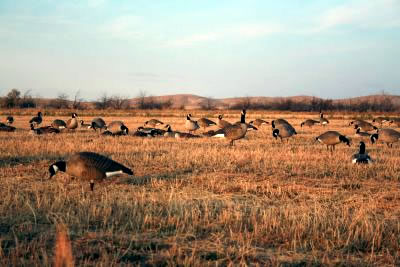 The most important consideration is to set up in a field the birds want to feed in. You locate such a field by scouting. Canada geese are more habit-oriented than snows. Find a field they're using for more than a day or two and you usually can count on their return the following morning. With snows, it's only sometimes reliable. Still, scouting is paramount.

When you located such a field, be sure to obtain permission to hunt it the following morning. Pay very close attention to the exact location of the birds during your scouting effort. Unless the weather changes drastically, that's exactly where you want to set your decoys the following morning.

I do not use specific formations. I do arrange my decoys in family groups of from four to seven birds. That's a typical family size whether you're hunting canada or snow geese. Leave plenty of room between each group. Arrange a larger landing area. I generally allow a circle of 20 to 25 yards in diameter.

A year ago, local guide Dave Spaid and myself were hunting Canada geese near Pierre, SD. We were in a picked cornfield but it was cut high. The stalks extended about 15 inches tall. We know from experience geese do not like to land in such areas. I believe the same is true of snow geese when you're hunting barley or wheat stubble. If it's high, do what we did. With the landowners permission, we flattened the stalks in our landing zone and it worked like magic.

Remember, arrange your decoys in small family groups with plenty of open space between them. Leave that big landing area open.

Yes, there are days when everything seems to work but they don't happen often. On the others, do your scouting homework and then arrange the decoys as described.

If you are forced to hunt only on specific land and don't have the option of moving around due to leases, club policies, etc., overcome the rest with numbers. I have friends who guide at commercial spreads in southern Illinois and they tell me they use up to 2,000 decoys. Sometimes numbers can make a difference, but only when you're trying to decoy flocks into areas they haven't been using.

In such cases, calling and the use of flags can make a big difference. I'd rather have four mediocre callers working together than one championship caller. Sometimes the additional noise generated by several callers will fool the wariest of geese. Flags work especially well on geese that are upwind of your location and likely can't hear calling.

Tony Dean
Tony Dean is host and producer of "Tony Dean Outdoors," a regional television show that airs across the upper Midwest. Tony also produces "Dakota Backroads", a daily radio show that airs across both Dakotas and portions of surrounding states. Tony is a member of the North Dakota and National Freshwater Fishing Halls of Fame and has received numerous conservation awards at a local, state, regional and national level. Click here to visit Tony Dean's website..
TRENDING DISCUSSIONS
Advertise here