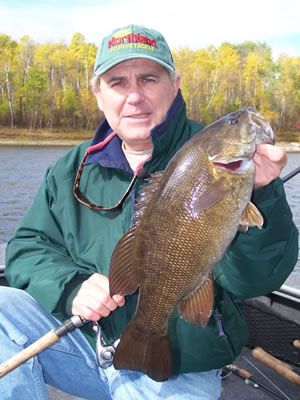 Rivers, both large and small, criss-cross the Midwest. Many of those rivers are full of fish in a wide variety of species. Those fish can be caught using a number of techniques, and they can be caught winter, spring, summer and fall. Here are some ideas for catching those fish right now. Most Midwest rivers are home to several species of fish, but there generally is a dominant predator specie. In many rivers that dominant specie is the walleye: In lots of other rivers smallmouth bass are more prominent. Usually though, a certain area of a river will have a dominant specie. In one stretch walleyes will be most abundant, as we move into another stretch of river, smallmouth will be more prominent. If we want to be as successful as possible, we need to employ the technique that will be most effective for the specie of fish that is most abundant.

One presentation that will take pretty much any type of river fish pretty much anywhere in the river is a jig. We can tip the jig with either a minnow or soft bait. In the toughest of conditions it's tough to beat a jig/minnow combination, but almost all of the time a jig/soft bait presentation will do the job very well. Many anglers, if limited to one jig presentation in the river, would choose a jig tipped with a three inch Power Grub. This rig will take almost every specie of gamefish found in a river.

It is very important to use a jig that is heavy enough to stay within a few inches of the bottom but light enough that we can hold it just off the bottom with our rod tip. There are times when it's productive to hold the jig just off the bottom with our rod tip raised. The Power Grub has a very active tail. By holding our rod tip in about the ten o'clock position, the current will move the tail while the jig stays in place, not moving forward or backward. This will make fish bite when they aren't aggressive.

Select a jighead that is made for soft bait. The Lip-Stick Jig-Worm and the Mimic Minnow head have keepers that prevent the soft bait from sliding down the hook.

Color can be an important consideration anytime you go fishing, and fall is no different. It works well to use a jig that is one color with a tail of another color. By doing so, you're showing the fish two different colors, which increases the odds of showing the fish the color they want. Fall fish will be moving in rivers. You might find a group of them on the tip of a wing-dam, you might find another group on the downstream side of an island. There will be some deep and some shallow. As autumn progresses, the fish will group up more and more, and they'll also usually be found deeper as we get farther into the fall season.

There are lots of ways to catch river fish, but if you put a jig close to them, you're probably going to get bit. But don't take my word for it, find out for yourself next time you get the chance.