So much of the time when we're looking for fish, we're looking for them near underwater structure such as sunken islands, reefs, weedbeds, just something that they might like to hang out by and are easy for anglers to find with the aid of sonar. 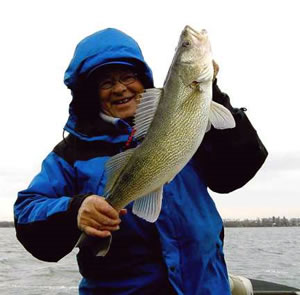 Other times we're looking for them near visible objects, maybe a tree or tree stump in the water, vegetation that is sticking above the water, something that we can see with our eyes.

On a recent trip to a Midwest lake we were after largemouth bass. This was late July, and the lake we were on had lots of scattered rush beds. The water had visibility to about three feet. There were some bass in the rushes, but not as many as usual. We started off throwing only to the rushes. We would fish a rush bed, then put the electric motor on high and get to the next rush bed. Action was ok, but not as good as it should have been.

On one trip to the next rush bed, we left the electric on low speed and talked about trying another lake. We continued to cast, and, strangely enough, got bit. Then we got bit again and again. There were lots of bass out cruising between the reed beds. We stopped fishing the reed beds and fished the wide open areas in between them. Action was very good, even at mid-day.

We were using rubber-legged Jungle Jigs tipped with a new type of soft plastic. It was a Berkley PowerBait Sabertail Burly Bug. This presentation was bulky and had lots of action: The bass destroyed it when they hit.

Bass aren't the only fish that cruise the open water. Walleyes on some bodies of water will be hundreds of yards away from structure and suspended, especially this time of year. I've seen it happen lots and lots of times. This is when you've got to keep your eyes on the sonar. You'll see fish suspended ten or fifteen feet off the bottom. Put your baits at that level and you'll get bit. I run a Humminbird 797 sonar on the console of my boat and it shows exactly where the fish are.

When the walleyes are closer to the surface, they can be spooky because they're closer to the boat. In that situation, planer boards will get the bait away from the boat and create strikes. The boards from Off Shore Tackle are easy to use, easy to read, and will help you catch more fish.

It's important to remember that the fish don't always do what we think they should. If you keep an open mind and try things a little out of the ordinary sometimes, you'll catch more fish.