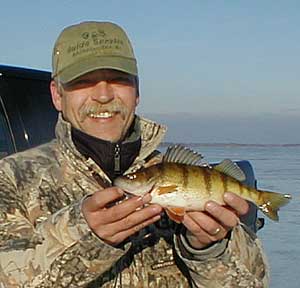 I'm sure that most of you out there, like me have heard tales of the Jumbo Perch in Lake Winnibigoshish in Minnesota. If you're also like me, you've probably thought, "Yeah, I've got to get there sometime." Well, Bubba, the time is now! We just returned from "Winnie" and let me tell you, if this was bad fishing conditions, I've gotta get back when it's good!

We arrived on a Sunday afternoon, the weather was warm, clear and way too nice for what I'm used to when icefishing!! We threw (literally) our gear in the cabin and hit the lodge for the latest perch report. We were told that there was 30 inches + of ice and that the perch were hitting in 30 feet of water. Butch, Steve, Gil and I piled into our trucks and headed for the lake. I was in the lead crossing the ice, following the remains of a plowed road, taking in the sights and daydreaming with Gil about how we were gonna slay these Minnesota Monsters. Tip #1: Its not a good idea to be doing this on a strange lake. We were cruising on glare ice when I noticed large (Dodge Ram hood size) chunks of ice that appeared to be floating, rapidly approaching the truck. I hit the brakes (to my credit, I didn't scream) and with my heart in my throat (and glad that I ScotchGuarded the seats), slowly slid onto the apparently broken ice. Holding my breath, I looked out the window and saw that the ice had been broken and re-frozen, what looked like slick water was actually very hard frozen ice that was glass clear!! Laughing weakly, I uncurled my toes from the brake pedal and continued on. 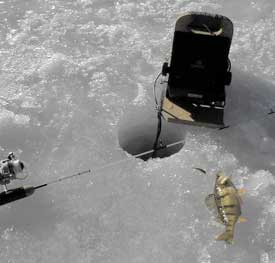 We hit an area that "looked good" and got out the augers. Tip #2: Take a good pair of ice cleats with you if you go on late ice. Believe me, you look really silly with the auger still and you spinning around the auger like some kind of demented carnival ride. The locator went in the hole and "Lo and Behold", the were fish down there! That settled it, this was "The Spot." Man, I haven't seen clouds of fish like this on a locator in a long time. We drilled a couple dozen holes and started fishing. A minnow tipped 1" Swedish Pimple or Vingla seemed to do the trick. It wasn't long and I was pulling up my first 9 inch Winnie perch. I couldn't get over how thick even the small perch were. What seemed to be the pattern (when we were there) was to drop the jig onto the bottom, bounce it a couple of times in the mud and then lift it an inch or two off the bottom. Holding the lure steady, after bouncing it would produce a very soft take. A soft tipped "noodle" rod did the trick. I tried a stiffer rod and it seemed that the perch would feel the rod before I could feel the take. The softer rod would slowly bend down and that's all a hit felt like. Concentration was a must.

Perch from this depth had to be brought up slowly, too fast and they'd look like my son eating bubble gum, just this huge pink wad filling their mouth. The air bladder would swell from the change in pressure and just come bulging from their throats. The fish that we released did go back down immediately and I've been told that they survive but we found that bringing them up slow was easier on the fish and we got to enjoy the fight longer.

We ended up taking 34 perch on the first afternoon there. There was a brief flurry of activity just at dusk that had us laughing, reeling and enjoying a beautiful sunset over the ice shrouded lake. We got back to the cabin, filleted our catch and called it a night, exhausted from the drive and the fresh air not to mention wanting to get an early start the next day.

Day number 2 dawned cool, clear and WINDY!! As the sun came up on "Our Spot," so did the wind. There had to be 30 mph sustained winds with gusts to at least 45!! Cleats this day were a necessity. Without them, I'm sure that I'd be sending this report from Canada, I know a couple guys that we saw out there without them spent a lot of time walking back to their holes after the wind blew them away from the holes. They also spent a lot of time getting back up after falls.

Day 2 was kind of tough. A lot of holes were required, you'd fish one hole, catch a fish or two, then the hole would "shut off." Move to an adjacent hole and you'd catch another one or two. Different

lures, different baits, different depths, nothing made a difference. They just were moving around and if you didn't follow them, you didn't get bit. So Day 2 was spent "hole hopping" and catching one here, one there. But the size was still very nice. We didn't keep a single perch under 9 inches, with a lot of 10's and a few 11's thrown in for good measure.

Tip #3: If you are going to take a portable shack, I'd suggest a cordless drill and 6 inch drywall screws. We tried ice spikes and the winds were soooo strong, the spike pulled out. Gil, being the boy scout that he was, was prepared. He had the necessary equipment and drilled the screws right through the floor and into the ice. Once this was done, we never had another problem with the shack blowing away. We had that happen once before screwing it down and let me tell you, boy, shacks are fast!! Tip #4: When driving on any lake, either leave a window open or make sure that your car keys are in your pocket.....Don't ask anything more about this!!! All I can say is that the Chrysler Customer Care Program really works. We fried up the perch from the previous afternoon for our evening meal. With our crew, it wasn't a pretty sight, total devastation. We ate enough that night to feed a third world nation. If it wasn't painted or nailed down, it got eaten that night!!

Day 3 was a repeat of Day 2 except slightly warmer. The perch were still in 35 feet of water, still tight to the bottom and picky, picky, picky. But they were hitting with a little more gusto. The Swedish Pimples and Vinglas still outproduced any other bait, believe me, I tried them all. Due to family commitments, we had to leave the lake around 10:00 am but we still came off the lake with a nice batch of perch and 3 bonus Tullibee to boot. To those of you who don't know what a Tullibee is, don't feel bad, until this trip, neither did I. They look a lot like a shiner minnow except that the ones that we caught were around 14 inches. They fight like crazy and we brought them home with us. I was told that they are really tasty smoked and hey, a smoked fish and a beer while watching fishing shows on tv sounds pretty darned good.

While we didn't "kill em" like we hoped to, I came off the lake with 50 nice perch. One of them was 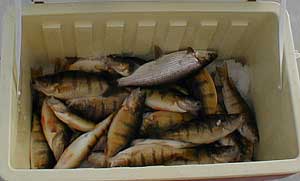 an unbelievably fat 12 1/4 inch beast. While it wasn't the longest perch I've ever caught, it was certainly one of the fattest. I've never seen a perch this broad. We talked to a creel survey/census taker while out on the ice and he said that we had one of the nicest batch of perch that he'd seen in the area. I guess other anglers weren't as selective as we were. I asked him about the rumors of reducing the limits from 100 in total to 30. His opinion was based on what he's heard around the office and that while the limit would be reduced, it would probably still be 50. Believe me, 50 of these is a LOT of fillets. (Remember this when you're cleaning them....I warned you)

So quit putting it off, if you can get away for a couple of days, get on over there!! There should be time left, there was lots of ice. There are lots of special packages available and it really was quite reasonable when split four ways. Besides it was great fun and if you get better fishing than we did, you'll think you've died and gone to heaven. You won't be far from wrong.

Steve Huber
Steve Huber, an avid angler with over 35 years of experience (man, he's old) is one of the few multi-species guides in the Rhinelander area. He's been operating G & S Guide Service for 8 years now and loves to fish for Muskies, Northern Pike, Largemouth/Smallmouth Bass and the occasional Walleye (in no particular order). A person who loves to see others succeed, he's an educator while on the water and when he's not teaching you something, he'll regale you with tales of adventures and mis-adventures gleaned from his years on the water. If you liked this article, you can check out Steve's web site at http://www.herefishyfishy.com.
BITS & BITES
Advertise here