No Bologna - The Old Timers Had a Great Weekend 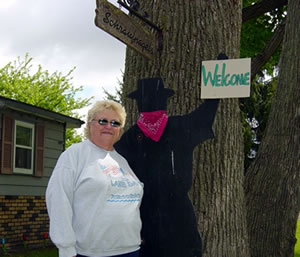 If you haven't learned the meaning of true friendship, then you need to check out Lake Link's "Old Timer's" thread. We've been called "Old Timers" and "Old Geezers", but our friendships and our sense of humor have been a major contributing defense against aging. Nonetheless, our social roles may be aging, but we're young at heart. One of my discoveries that I'd like to reinforce is that true friends can grow separately without growing apart through an internet connection. We're a close group of friends that go through life together, one day at a time. We give comfort and positive advice to each other; this type of medicine doesn't come in a bottle. We like to get together for outings and I'd like to share one of our recent outings with you.

The weekend event was hosted by Mr. and Mrs. Perch. Throughout the weekend, we arrived, one by one, from across Illinois and Wisconsin. Some of us stayed in hotels, some visited only for the day and others camped out at the Perch's campground. Prior to the event, an executive decision was made to leave our boats at home as there wasn't going to be enough time to fish. We all agreed that this weekend would be devoted to spending time with good friends.

My husband, Dropshot2, and I enjoyed the scenic ride through the country side; although the directions were quite different than us city folks were accustomed to. Never in our lives have we used speed limit signs as reference points, but they're very significant in the country when there are only fields that surround you. And how does one decipher the given directions: when you come to a four way stop that "used to be there", turn left??? My husband was worn out before we even arrived at the Perch's house because he kept stopping to ask the farmers if that was the four way stop that used to be there. Yep folks, we were in the country now. As we turned the corner and were approaching Mrs. Perch's home, we noticed her standing out by the road. Her smile and warm greeting is something that I'll never forget.

On Friday night, eighteen of us met up at Jackie & Donna's Bar & Grill in Juneau for an all you want to eat fish fry. Mrs. Perch had reserved the back room for our group and the tables were set up for our arrival. As I entered, I spotted Barefoot and his sidekick, Crusty. As tradition has it, Barefoot showed up wearing one of his famous fish ties. Dinner was delicious and plentiful, which was a good thing because MGD hadn't eaten all day. In fact, he was really enjoying himself, every time a platter of fish came around it would make a brief stop by him. Synker showed up for dinner and we noticed he was a little quiet. He just got off of the night shift and he didn't have much sleep. I think his days and nights were mixed up because the poor guy was a little out of sync. 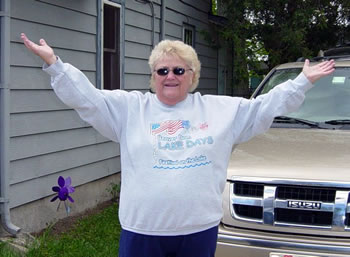 Afterwards, many of us gathered back at the Perch's house and entertainment was non-stop all weekend. Mrs. Perch provided us with entertainment as she performed and sung her rain dance song, "Mr. Sun, Sun, Mr. Golden Sun Please Shine Down On Me." I truly believe she has some type of magical powers about her because she managed to keep the rain away. All evening the rain and threatening clouds circled around us but never fell upon us. As the sun started to set, the Nor-Finns started a campfire. Many of us gathered around the campfire to watch the magical display of blue and green flames dancing while we told stories. And just when you thought it couldn't get any better, Mrs. Perch served her famous homemade pies for everyone. Meanwhile, others were helping Dairymon and Mrs. Dairymon set up their tent. Just as Dairymon finished pumping up his air mattress, Mr. Nor-Finn started his fireworks display of bottle rockets. You would have thought the bottle rockets and air mattress were synchronized because the timing was perfect. Picture this if you will: The screeching sounds from the bottle rockets scared Dairymon and he came running out of his tent because he thought his air mattress just ripped a leak and it was getting ready to take off. The intermittent sounds of bottle rockets and laughter echoing through the countryside never woke Mr. Perch up. We heard stories about him being a very sound sleeper and he managed to sleep the night away. As everyone was getting ready to leave for the evening, plans were made to meet for breakfast the following morning and then we'd gather back at the Perch's for another fun filled day.

"One of my discoveries that I'd like to reinforce is that true friends can grow separately without growing apart through an internet connection."
Many more Old Timers arrived throughout the day on Saturday. J&T's dad dropped by the geezer's gathering for a short visit; however, he made a promise to Mrs. Perch that he'd come back later to join us. Actually, I think Mrs. Perch made him an offer that he couldn't refuse because I heard him mumbling as he walked away, "I'll do as I'm told, or else no more lemon pie". Crazyhunter and his family arrived and how wonderful it was to meet his daughter, Gini. Gini had so much fun and we kept her entertained all day. The Old Timer's presence together is to inspire the next generation and we were delighted when Gini decided to attend our next outing. New to the outing this year was Ace Big Pike and his wife. He watched and listened to everything that happened that day and he teetered with the thought about becoming an Old Timer. We'll never know what happened that day that convinced him, but we were very pleased when he made his decision to join us Old Timers on another outing. We held a swap and trade and many good deals were made; however, JayLane made the best deal prior to attending the outing. He proudly displayed an assortment of quality lures that he got a good deal on; unfortunately, his dear wife couldn't understand why he needed so many lures.

All eyes were on Fish-A-Holic when he fired up the grill and started grilling his homemade Brats. Brats are a way of life for most Wisconsinites. And with that being said, Brats accompanied by good friends is like the icing on a cake; it doesn't get much better than this. Perch finally arrived home just before dinner. And to see Perch get such a heartwarming greeting from Mrs. Perch as he's driving towards home was more than any of us expected. Like any past outings, there was more than enough food, but not much got wasted. Even Mrs. Perch's dog, Angel Baby, who was part of the clean up committee, managed to find a few left over tidbits.

Into the evening Mrs. Perch continued her rain dance; however, as they say, "All good things must come to an end". The rain showers came and everyone scattered in Mr. Perch's garage where we enjoyed many conversations that we can't talk about. The Perch's neighbor, Birdman, was very surprised to see so many people nestled in Perch's garage that he flew over to check things out. The stories and laughter continued throughout the evening. The only thing that I can say "Is what happens at the Perch's, stays at the Perch's".

Sunday morning everyone gathered at PJ's Restaurant for breakfast. Everyone was pleasantly surprised when Old Phart joined us. Although he only had breakfast with us, he was looking forward to our next outing. For those of us that hadn't left yet, we posed for a group picture and then, one by one, we said our goodbyes.

As the weekend came to a close, there's no doubt in anyone's mind that we're the luckiest people to have found each other. Never underestimate the power of the Old Timer's friendship as we're committed to making sure everyone has a good time. I want to personally thank Mr. and Mrs. Perch for their hospitality. It takes special people with big hearts to welcome over two dozen friends into their home. The weekend "measured up" to everyone's expectations and I can't wait for the summer outing.

Jackie Vogen
My name is Jackie Vogen "aka Redrose4u2" and I'm 50 years old. I live in New Lenox, Illinois. I've been married to my husband and best friend, Ken, for 31 years. We've raised two beautiful daughters, who are now grown up, and have left home. We've recently entered into a new stage in our life; we've become "empty nesters". This new independence has allowed me to discover my passion in life; I LOVE TO FISH! I'm what you would call a "Beginner Fisherwoman" or a "Novice". Besides fishing, I enjoy computers, gardening and photography. Through fishing and photography, I've been able to capture my thoughts, while surrounded in the beauty of the sport. I'm looking forward to sharing my passion with you!
BITS & BITES
Advertise here
Advertise here
Please take a moment to visit our sponsors. Without them we would not be here.