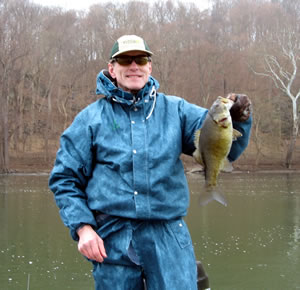 I never enjoy the wait from late October to early May to get back on the water for smallmouth bass. The way this past winter began, and continued, I knew the six months was going to feel even longer. With this in mind, I thought I'd try to coordinate some smallie fishing at the end of March during a business trip to Washington, D.C. The other Web site that I write for is www.riversmallies.com, which is a site dedicated to those of us who love catching river smallies. Many enthusiasts on this site fish rivers along the eastern seaboard. I put the word out that I was thinking about giving the Potomac a try and happily had a number of offers to get me on the water.

Dave Menton is a regular on River Smallies and calls the Upper Potomac his home waters. I jumped at Dave's offer to take me out on both Sunday and Monday, March 30-31. With the kind of winter we had, I was ready to get on some open water for smallies. Dave is a great guy, and, as I noted, really knows the Potomac up and down river from Brunswick, Maryland. He has an 18' jon boat with a 90/60 Mercury jet outboard. His boat is perfect for river fishing with a seat and stick steering located on the front deck, along with a back casting platform for guests like me. As you can imagine, I was really fired up for two days of chasing Potomac River smallies. I was keeping my fingers crossed for some nice spring weather, the kind I've experienced at this time of the year on other trips to our nation's capital.

I met Dave at the White's Ferry parking lot on the Maryland side of the Potomac. What a great way to cross this historic river. At one time there were 100 ferries crossing the Potomac. White's Ferry has been operating at this location since 1828, and is the last on the river. It was great meeting Dave in person. After our friendly greetings we headed north to a non-descript launch south of Brunswick. Unfortunately, we didn't get our nice spring weather. On Sunday, the high temperature made it all the way up to 38 degrees, with a water temperature hitting 46 degrees, BUT I was on a beautiful river fishing smallies. Dressed in a few layers of clothing and wearing my Frogg Toggs to break the wind, we headed up river dodging boulders and mini rock islands that dot the Potomac. It was like an amusement park ride as Dave expertly navigated a narrow chute between two of these islands. For three hours we hit every great looking place any knowledgeable river rat would try. Based on the water temps and goofy weather, we both felt working tubes or weightless Senko-type soft plastics slowly on the bottom would be our best bet. Dave told me in these types of conditions he usually goes to the tubes. All our efforts produced was one 14-inch largemouth I caught on a Texas-rigged 4" YUM Dinger.

What happened next has never happened to me, or anyone I've fished with, in all my years on the water. We were in about 4 feet of water, just out of the heavy current, and as Dave's guest I was fishing the back deck. Well, as I'm stepping off the deck onto the lid of the storage area that runs along the side of his boat between the front and back decks it happened. I somehow stumbled and the next thing I know I'm mid-air, heading for the Potomac River. If I can say I was "somewhat" coordinated, I was able to turn in flight and catch the side of the boat under my arms as I fell. I must have touched bottom, but I don't remember, even though this all seemed to be happening in slow motion. As Dave told me, "I looked back and you were there. I heard something, and you were gone."
"Based on the water temps and goofy weather, we both felt working tubes or weightless Senko-type soft plastics slowly on the bottom would be our best bet."
Dave quickly helped me back into the boat. Talk about embarrassing! Amazingly, I didn't even utter an expletive. He was so nice about the whole thing, which helped, but I know he was laughing his butt off inside. As I mentioned, I caught myself under the arms so I was only wet to my lower chest. Surprisingly, I wasn't that cold at first, so we kept fishing for a half hour. After that, I started getting cold so we headed back to the launch so I could go back to my hotel to change cloths and warm up. I told Dave that I was looking forward to fishing "on" the Potomac but not "in" the Potomac. To make me feel worse, after dropping me back at my car, he went back out and caught four nice smallies up to 19".

When Dave picked me up on Monday at White's Ferry, he told me with a straight face that he brought an extra set of clothes, just in case. I thanked him and said, "so did I." My plan was to make every effort to stay in the boat all day. Monday had off-and-on-again light rain, and hit a high of about 45 degrees. The water temperature climbed to 49 degrees. Interestingly, Dave caught his smallies the day before on a small crankbait. I told him I'd brought some Rebel Teeny Wee-Crawfish and Wee Crawfish. These were colder water temperatures than I'd normally think of using the small cranks in, but based on his experience from the day before, this is what we used. The Teeny Wee wasn't getting deep enough so I switched to the Wee Crawfish. Even though things were still slow, I did end up with three nice smallies, had three more on, and Dave caught another two. This, and not falling out of the boat, made for a very enjoyable day of fishing, even with the cool, wet conditions.

For a guy coming from the kind of winter we had this year in Wisconsin, it was just great getting some open water fishing for smallies, even though it was cold and I experienced the "Potomac plunge."