By Bob Jensen - March 1, 2008
In some states throughout the Midwest, the ice-fishing season for walleyes and northern pike is coming to a close, or has, in fact, already closed. If you live in one of those areas, now is not the time to hang up the ice-rods and put the shelter and auger in storage. There are still some very good opportunities for ice-fishing action. Some of the best perch, crappie, and bluegill ice action is still to come. Here's how you can get in on it.
"Crappies can be kind of strange. In some lakes they'll hang close to the bottom just like a walleye, in other lakes they'll suspend."

Perch can be in different places in different bodies of water, but most of my perch catching late in the season has been in deep water, sometimes down to thirty feet.

In other lakes they'll be shallower, but when they're shallow, that's usually because there is no deep water in that lake.

Not relating to panfish but still kind of on the topic of fish location, on an ice-fishing trip for walleyes two years ago on Lake of the Woods, the walleyes were running twelve feet down over twenty five feet of water. They were biters, but you had to bring the bait up to where they were.

Back on the topic of panfish location under late ice; Expect to find bluegills along weedbeds or around brush piles. They might be over the tops of the weeds or suspended along the deep edge of the weeds, but if you find good cabbage weeds, you're probably close to some gills. 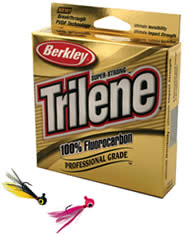 These panfish can be very active, but you still need to present the bait correctly. For gills, go with two pound test Trilene Fluorocarbon. It's invisible underwater, and sometimes that's what it takes to put finicky bluegills on the ice. Go with a 1/64th ounce Fire-Fly jig for gills. Lots of anglers like black, as they feel it best copies the tiny bugs that are in the water.

Crappies and perch both like Forage Minnow spoons tipped with a piece of minnow or a couple of Gulp! Maggots. A lot of colors will work, but Super-Glo Perch is a real winner day-in and day-out.

For perch, drop the spoon to the bottom, let it rest a second or two, then give it a couple of good snaps. That attracts the perch. Let it sit still for a few seconds, then snap it again. Keep a close eye on your sonar to see how the fish are reacting to the snapping-resting action.

A more subtle action is usually best for crappies. Put the spoon just a bit above the crappies, then quiver it. If they want it, they'll eat it.

Keep a close eye on the ice conditions, but if it's safe, get out there for some late season panfish action. I've always found that late ice panfish are a great way to start the new open water season.