By Bob Jensen - February 1, 2008
Whether you’re talking about open water fishing or ice-fishing, one concept remains constant: You’ve got to put your lure near the fish if you want to catch it. That sounds basic, but especially when ice-fishing, where your lure is in relation to the fish is very, very important. In fact, the position of your lure will sometimes determine if you catch a few fish or no fish. This fact was made very clear on an ice-fishing trip late last winter. 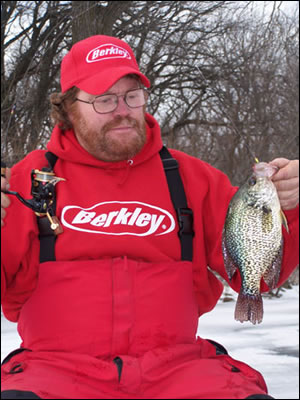 Ice CrappieWe were on Upper Red Lake in northern Minnesota and crappies were the quarry. Whenever you’re on the ice, a sonar is a necessity if you want to consistently catch fish. We were using MarCum LX-5 depth-finders. These are outstanding sonar units. They’ll show the tiniest jig, and they’ll separate a fish from the bottom even when the fish is just inches off the bottom. Our sonar was consistently showing us fish right on the bottom, so we were putting our baits right in their face. We weren’t getting bit.

Crappies are often thought of as fish that suspend, but on Upper Red Lake lately they’ve been hugging the bottom. These are very mature crappies, and they’re also very large. Maybe mature, big crappies hug the bottom: I don’t know. I do know that these guys were on the bottom, but they didn’t want their bait on the bottom. Finally, one of the anglers in our group held the bait about a foot above one of the crappies that could be seen on the screen. That did the trick. For the rest of the day, whenever a fish showed up on the sonar, we simply put our bait about a foot above the fish, and almost every time the fish bit.

A rattling bait like a Buck-Shot Rattle Spoon is used to attract the fish into an area. Often times it works well to rattle it right on the bottom, but when a fish shows up, lift the spoon up. If the fish follows it up but won’t hit, lift it some more. Don’t jerk it up quickly, just lift it. Crappies(and walleyes, perch, and bluegills) will follow it up quite a ways sometimes before hitting.

If you’re sitting on a hole and you’ve just unhooked a fish or are changing baits, or for whatever reason your lure isn’t down there yet, and a fish shows up on the sonar, try this. As you lower the bait, watch how the fish reacts. If, as the bait gets closer to the bottom the fish moves up, slow the fall of the lure. See if the fish will come up and take it, or note if the fish wants it to fall farther. The higher the fish moves to take the bait, usually the more active the fish are.

Just remember: Much of the time you’ll catch more fish if you keep your lure a little above them.