Fishin' With the Fishin' Musicians

By Bill Schultz - January 1, 2008
During the summer of 2006, I noticed an interesting fishing report about a river in Wisconsin by a guy with the handle, Fishinmusician. I hadn't heard of this river in my home state, where I thought I knew all the good smallie rivers. So, I messaged Fishinmusician to find out more about this river on which he and a buddy had such a great day. He got back to me with an expanded report. I was curious about his handle and asked him about it. He told me he and his buddy were members of a country band. 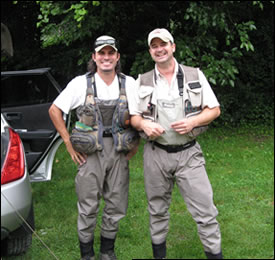 Fishinmusician is Tom Bentley, who is the keyboard player for Joe Nichols. His buddy is bass player Brad Albin. Tom and I had a number of conversations and e-mails related to river smallie fishing in Wisconsin during the 2006 season and into the 2007 season. Both Tom and Brad live in the Nashville area and have fished most of the rivers and streams holding smallmouth bass within a couple hundred miles of home. Touring with Joe Nichols takes them around the country, and in many locations, they try to find a local expert who can tell them where to find smallies. Sometimes, if the schedule works out, they enjoy fishing with the local expert who has helped them.

During 2007, Joe Nichols played in or near Wisconsin six or seven times. I was disappointed last June, when a rare sick day kept me from picking the guys up in Oshkosh to fish that river in Tom's original report. We actually talked early that morning as the buses were cruising near my home in the Milwaukee area. They told me to get better and once in Oshkosh, got a car and headed to the river for some great smallie fishing.

Most of their shows are in the evening. Following the show, the crew packs the equipment and everyone jumps in the two tour buses and travels overnight with the band and crew sleeping. This is why, in many locations, they are ready to rent a car and head to a local stream by early morning.

My second chance to fish with Tom and Brad came on July 27 when Joe Nichols was the headliner at the Dubuque, Iowa, County Fair. The band had the rare luxury of arriving in Dubuque with a day off. I couldn't get to Dubuque until the next day, so I gave them a number of options in Southwest Wisconsin on my three favorite rivers. They made a good choice of where to fish and had a great time catching 60-80 smallies up to 18 1/2 inches.

I met them early Friday morning. We dropped off their rental car and headed to the "catch and release" Maquoketa River west of Dubuque. It was great meeting the guys in person, and we seemed to hit it off, at least I think so. If we didn't, they were polite enough not to tell me. We had a good half-day catching 70-80 smallies. Charlie, who we met on the river, had one over three pounds, with Brad catching a nice 17-incher.

It was enjoyable fishing with Tom and Brad, but to a certain extent, fishing is fishing. For me, what we did the second half of the day was brand new. We stopped fishing in the early afternoon because we had to be back to the fairgrounds for the sound check. After the sound check, I got to hang out with the band and see first hand what the fancy tour buses look like on the inside. Very nice! 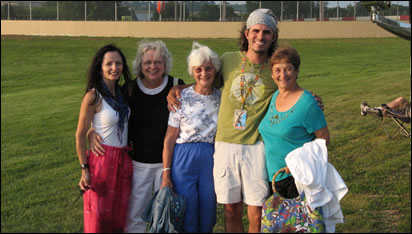 That evening, my wife, her mom, a couple of her mom's friends and I took in a great show. Before the show, we got to see Tom, while Brad took a much needed nap. We also were able to meet Joe Nichols during the "meet and greet" before the show. We all had a great time, and Becky's mom and friends are still talking about it.

I'm not the only river smallie enthusiast Brad and Tom have fished with. I'm very envious when I tell you they've fished the Susquehanna River with Tom Boyd and the Upper Potomac with Al Pugh, George Thurston and Derek Zurfluh. In Tennessee they've been on the Holston River with Thomas Lepsch and in Illinois on the Kickapoo Creek with Mark Hedgaer. And, as I mention earlier, the Maquoketa in Iowa with yours truly. Over the past few years, they have fished in 28 states on 12 rivers and six lakes for smallies, largies, spots, trout, salmon and arctic grayling in Alaska. Not bad for a couple of country boys. 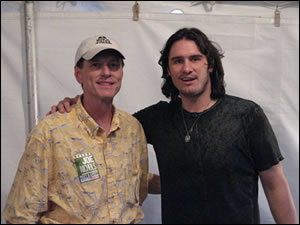 I asked them how long they have been professional musicians. Brad told me he's been making his entire living as musician since 1986 and has played with Joe Nichols since August of 2002. Tom has been a professional musician for 16 years and has been playing the piano for 30 years. He has been with Joe Nichols for almost three years and feels Joe is the most talented country singer he's heard.

Both Brad and Tom have loved fishing since they were kids. Tom told me his first fishing trip was to Dale Hollow in Tennessee with his father and grandfather. Now that's the way to start fishing. He began fishing rivers/streams about 10 years ago. It initially started as an expedition for trout, but he quickly fell in love with smallies and hasn't looked back. Brad was more of a lake guy until Tom joined the band and got him turned on to river/stream smallies. He tells me that without question this type of fishing is his favorite.

Even fishing with Brad and Tom for a half day, it's obvious that they know what they're doing. Brad likes to fish slow, so soft plastics suit his style. His starting lineup consists of jigs with grubs/tubes along with using Senkos and Case Jack's Worms. More recently, he has become a big fan of soft jerkbaits like Flukes. For topwater, Brad likes Torpedos and Sammys. Tom tells me that his current favorite smallie presentations are the Case Jack's Worm, Reaction Innovations Smallie Beaver, and some custom tubes from Dry Creek Outfitters in Idaho and Luhr-Jensen Hot-Lips cranks. He also loves Senkos. Tom also mentioned the great luck he's had with an in-line spinner from a company called Joe's Flies. I'm still working on these two guys to spend more time with the Rebel Teeny Wee-Crawfish. Maybe next year.

For me, it was a pleasure fishing with the Fishin' Musicians Tom Bentley and Brad Albin. I'm hoping they get back to Wisconsin in the future so we can hit some more of my favorite smallie rivers. And, I have them hoping to fish Door County with me sometime.

Bill Schultz
Bill Schultz lives in New Berlin and Sturgeon Bay, WI, and is a contributing writer for several magazines and web sites. Since catching his first smallmouth bass in 1994, he has caught and released over 26,700. His focus has been on the big waters of Green Bay in and around Sturgeon Bay, along with rivers and streams throughout Wisconsin. Catching and releasing smallies and sharing his recipe for success has become a passion for him. Bill is on the Pro Staffs for St. Croix Rods, Mercury Marine, Yar-Craft Boats, Jackson Kayaks, Bending Branches/Aqua-Bound Paddles, Kalin's, Keitech USA, RAM Mounts, Cedar Lake Sales and Malone Auto Racks/Trailers.
BITS & BITES
Advertise here