Lessons From A Season Of Fishing

By Bob Jensen - January 1, 2008
The cold northwest wind that blew through recently signaled the end of another fishing season for most folks. There will still be some trips to the river to catch walleyes, and ice-fishing will kick in pretty soon, but for now, most fishing is taking a break. This is the time of year when I like to look back to figure out what I learned this fishing season. 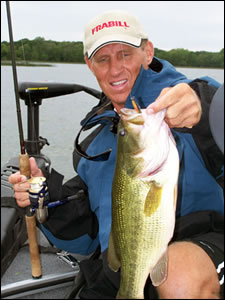 Swimming a jig is a great technique for a wide variety of fish. For so long, so many anglers thought that the only way to fish a jig was to crawl or hop it along the bottom. While crawling or hopping a jig is effective for sure, swimming a jig can also be very effective.

You can swim a jig for largemouth or smallmouth bass, walleyes, crappies, pike and muskies. It’s a simple deal: You throw a jig into what you suspect to be fish-holding territory, let it sink a little, then start reeling. If you’re after walleyes, let it sink long enough to get it close to the bottom. If bass are the quarry, try swimming the jig at a variety of depths until the best depth is determined.

For largemouth bass, try a Jungle Jig with a four inch Power Grub. Swim it through reeds, around timber, or over cabbage weeds. You’ll get bit.

For everything else, go with a Mimic Minnow head and a Power Grub or Gulp! Minnow Grub in the appropriate size: Two inch size for crappies, three, sometimes four inch size for walleyes, four inch for smallmouth and largemouth. Try swimming jigs next year and you’ll catch more fish.

Walleyes are often thought to be a fish that always hold close to structure and near the bottom. It became very apparent this past year that walleyes are frequently away from the bottom and structure.

We were on Lake Mille Lacs in July, and lots of folks were fishing traditional walleye areas, areas with structure. They were catching a few fish.

We moved a quarter to half a mile off the deep structures and kept a close eye on our sonar unit. We could see clouds of insect life, and lots of fish marks around the bugs. The water was in the thirty foot depth range, and the fish were suspended about fifteen feet below the surface. By running crankbaits in that fifteen foot range, we caught lots of walleyes.

Every fishing season should be a learning experience. It’s important to remember that we shouldn’t do the same thing the same way all the time. If you keep that in mind, you’re going to catch more fish.