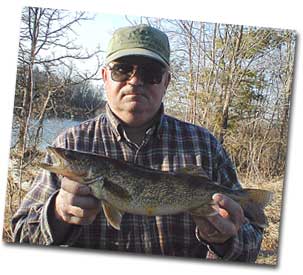 It's springtime in Wisconsin and a man's thoughts turn to......Fishing!!! I mean c'mon, you didn't really think that I'd give you that old tired "thoughts turn to love?" Well, love of fishing perhaps.

Spring in this part of the world is a special event. The ice is finally gone, the birds are singing, the grass is greening, the sun is shining...."Well three out of four isn't bad." This is a great time, especially if a river is nearby. I've been plying the Wisconsin River for the past month and a half, catching a typical Wisconsin grab bag of game. Walleyes, northern pike, smallmouth bass, crappies, perch, they've all been given a guided tour of the inside of my boat.

Depending on your location in the state, the walleyes are either in full spawn mode or their just done. That's ok, they're still catchable and everything else is starting to kick into gear. Something that I like is you never really know what's going to be grabbing the end of your line. Just today, I was out on the river and caught 20 walleyes, 6 nice sized perch, 2 crappies and a 28 inch northern pike. The only thing that I missed out on was a smallmouth and a muskie!

Location is fairly simple, check out the deep holes and scooped out bends on the rivers. If there is a dam, it pays to fish the pool below the dam. This spot is always worth a look. What I usually do is first, take a slow cruise around, watching the locator, looking for concentrations of fish. If I find fish marking within the bottom three feet, I'm fairly sure that it's walleyes. If they are stacked in a vertical line, crappies could be on the menu. If I find fish in the top five feet of the water column, pike are cruising. And if I find all of the above, like I did today, I think that I've died and gone to heaven!

If they are marking just off the bottom, I'll rig a jig and minnow on a light six to six and a half foot spinning rod. I like using 10 pound test FireLine for this type of fishing. With it's high break strength, fine diameter and no stretch, it's perfect for river jigging. With the current and snags that are typical in rivers, FireLine is a logical choice. The small diameter allows you to fish a smaller jig than you would with comparable monofilament, the current doesn't push on the line and a small jig gets down deep. Also, with the high break strength, if you do get snagged, you can straighten out your jig hook and you won't break off as often. Anyway, I'll start with a 1/16th oz. jig and a 3 inch fathead minnow. Toss this upstream and let it sink. Once it hits bottom, alternate between small "pops" on the line and dragging the lure across the bottom. Quite often, all you'll feel is "weight" on the line. Drop back and gingerly take up the slack, if you feel a tug or head shake, set the hook!! At this point, it's anyone's guess as to what's on the line....although it's fairly safe to say that you've got a walleye.

If you're marking smaller fish and they're stacked, then it's time to break out the slip bobbers, it's crappie time. Perch will suspend like crappies, but they usually won't be suspending vertically, they'll spread out more. Set the depth to about a foot shallower than the fish are marking. Crappies, being primarily an open water fish, will readily move up for an offering. Often, instead of using a plain hook and splitshot, I'll put on a 1/32nd or 1/16th oz. jig. Sometimes, crappies like a little splash of color, sometimes they don't, it pays to experiment. Again, cast upstream, allowing plenty of time for the hooked minnow to get down to the proper depth. Allow this to

swing through the school, steadily taking up the slack line. Usually, this will get a bite as soon as it nears the school. Many times, I've gotten 8 - 10 crappies before the school moved on.

As a side note, for those of you who saw me with a nine foot spinning rod this winter at the Ice Fishing Outing and thought I was crazy, I gotta tell you, if you can find one.....GET ONE!!! I've been using this nine footer this spring and it's impossible to fish without an ear to ear grin. I caught walleyes, crappies, and a nice sized pike. The crappies put up a good fight, the walleyes were great and the pike was absolutely the most fun that you can have and still be legal!!

So hey, get out while you can, the lawn is still too soft to rake (that's what I told my wife), it's too early to take down the storm windows and I don't know about you but if I hear once more, "Honey, it would be great if you could......", you'll find me curled in a corner, staring at nothing and sucking my thumb.