My Dream of Catching My First Musky Comes True

By Jackie Vogen - December 1, 2007
Legend has it that Muskies are a fish of 10,000 casts. I kept playing this thought in my mind as I prepared for my upcoming Musky trip to Webster Lake, Indiana. As an inexperienced Musky fisherman, I managed to read a few articles about these toothy critters and realized that capturing a Musky is a task that only a few will accomplish. Despite the fact that my chances would be slim, I kept an open mind as my husband and I left for our four day Musky trip. Little did I know at this point in time, the journey would have more significance than the destination; as the action was in the journey and it was quite an intense challenge for me. 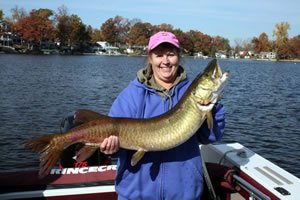 I've read that the best time to fish for Muskies is in the fall because they have more of an intense appetite, as they're fattening up for winter. My goals were to figure out what the Muskies were eating and locate them. My game plan was to use my electronics and study the graphs while looking for areas that marked baitfish. I knew if I could find the baitfish that this would be a key factor in finding Muskies. A live sucker is a very tempting meal for a Musky in the fall, so I decided to present a live sucker in the most effective manner. Next, I set up a quick strike rig with a medium size sucker and felt good about the fact that if I had a Musky on, I'd be able to release it without harm. I suspended the sucker on one side of the boat and proceeded to cast a variety of top water baits and diving lures. While reeling in the lures, I was hoping a Musky would follow the artificial bait and would strike as I was making my figure eight near the sucker. I kept changing lures and used different colors and after several hours, still no follows.

My husband and I decided to do some trolling along the weed beds, finally I felt a tug-tug and I knew at that moment that a Musky had taken the sucker. I set the hook and this was the start of a cat and mouse game that seemed to take fifteen minutes, but unfortunately, I lost the Musky. As we dragged the flats, my husband had a Musky on and it was so much fun watching him reel in his 40-incher that weighed 20 lbs. I was very proud of my husband as he landed the first Musky in our boat. I took a few pictures and then he released his fish. A hard and fast rule is to let the fish dictate the bait and it was obvious at this point that the Muskies were only chomping on suckers. We drifted over deep holes while dragging suckers as the winds created a good drift for us. One of the rods I was using is a twenty-five year old Fiberglass Coho Rod, spooled with 50 lb. braided line. I'm sure other fishermen around me chuckled to themselves because the Coho Rod actually looks like a pool cue. As we're drifting, I felt another tug-tug and I had my second Musky on and brought it to the boat side, but again I lost this Musky because it bit short on the harness. I immediately dropped my sucker back into the "strike zone" and within a short time the Musky was back on. My rod was bending and as the fish was moving away from the boat, I did a hard hook set. At this point, a feeling came over me and it was something that I never felt before. My blood started pumping faster, my heart started racing, my hands became tingly and all of a sudden I felt like I turned into a hunter. My "pool cue" had now turned into a weapon and it felt like I had a gun in my hands.

I was now running around the boat, as I was absorbed by the task at hand. As I continued to chase down this Musky, I felt the urge to jump out of the boat, just like a lion would jump on its prey. The Musky took off underneath the boat and he had me running in circles. I felt like my husband was chasing me around the boat with the net, and I could only imagine what we looked like from another boat. At this point my husband and I were both laughing, but still very determined to land this Musky. I couldn't help but think to myself that this was finally going to be my first ever Musky; I was so excited. While the Musky was splashing and thrashing around he made his way to the back of the boat. Then my husband and I ran to the back of the boat as if we were in a race; me with my "pool cue" and him with the net. There I was, getting ready to land my Musky, and how exciting to have my husband by my side witnessing one of the most exciting fishing moments in my life. Now the Musky worked its way between our swim platform and our engine and as I'm hanging onto my rod and getting ready to land him, my husband puts the net in the water and I finally catch my first glimpse of him. Now the Musky starts to roll over, spits the sucker out, and we both stand there in disbelief as we watch him swim away. We decided to call it a day as it was getting late. As we drove home, I was reflecting on the day. I kept thinking about the Muskies that got away. Needless to say, this trip was quite a learning experience for me. I learned that you can't rush the process and Muskies are the hardest fresh water fish to catch. 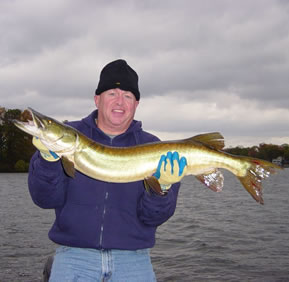 Well, the story doesn't end here, as all week I could not stop thinking about how I had turned into a "Musky Hunter". I was now hooked. I kept having dreams at night of catching a Musky and then I'd wake my husband up to tell him that I knew right where I was going to catch him. My husband told me since he's not going to get any sleep until I catch this Musky, we'd go back the following Saturday. So, on November 3rd a friend of ours, Ed, was out on Webster Lake and invited us to go out fishing in his boat. After spending several hours trolling around and no follows, I asked my friend, to go to the location that I had dreamt about. I would say in less than one hour I had another fish on. This time I was able to play out what I had already envisioned in my dream. With confidence, I let the Musky run, counted to three, secured my footing and set the hook. As I started reeling the Musky in and caught a glimpse of him, I realized that my reoccurring dreams had finally become a reality. As I got the Musky to the side of the boat, I yelled out, "Get the net". After a short fight, my friend Ed netted the fish and the Musky was finally in the boat. Several pictures were taken of my 45-incher, 33 lb. Musky and then the fish was released. I've never worked so hard and so long to capture one fish and there's nothing better than seeing a Musky coming up through the depths of the water while attacking a sucker. I feel very fortunate to have caught a Musky at this point in my life; as some fishermen don't capture a Musky in their life time. Beyond the challenge and thrill of landing my first ever Musky, my husband was finally able to get a good night sleep.

Jackie Vogen
My name is Jackie Vogen "aka Redrose4u2" and I'm 50 years old. I live in New Lenox, Illinois. I've been married to my husband and best friend, Ken, for 31 years. We've raised two beautiful daughters, who are now grown up, and have left home. We've recently entered into a new stage in our life; we've become "empty nesters". This new independence has allowed me to discover my passion in life; I LOVE TO FISH! I'm what you would call a "Beginner Fisherwoman" or a "Novice". Besides fishing, I enjoy computers, gardening and photography. Through fishing and photography, I've been able to capture my thoughts, while surrounded in the beauty of the sport. I'm looking forward to sharing my passion with you!
BITS & BITES
Advertise here