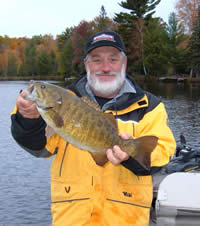 The only problem I have in October is deciding what to fish for. Whether you are after a 40 pound musky, a 12-pound walleye or six pound smallmouth, the time is right in October. Sure there are those diehard fishermen who only chase after on specie. However, there are many like myself who prefer to fish for all species. This means taking advantage of every minute and spending your time wisely. This is no time to check out new water. Fisherman will do best by fishing water they know is productive and has produced trophy fish in the past.

Each year fisherman put in their time in hopes of landing a trophy musky in the fall. Pick a lake or flowage with a quality musky fishery that has produced trophy fish in the past. In the early part of October I will fish one of the many flowages in my area. As long as the water temperature stays above 40 degrees most of these flowages will see active muskies. The weedlines with access to the deepest parts of the flowage will hold the largest muskies. Both deep diving crankbaits and jerkbaits are productive baits. If you are fishing with a partner make sure you use both presentations. The best fishing will occur from mid day through the late afternoon.

I must admit that on some days you can go through every lure in the box without a follow, only to boat a big fish with a sucker. While guiding I feel that my odds of boating a musky are greatly decreased if we don't bring along sucker. The problem is many musky anglers don't effectively fish suckers. They usually toss out a big sucker on a float behind the boat without any consideration as to the structure they are fishing. I will fish two suckers at various depths to cover the bottom and top of the strike zone. One sucker is set at 5 to 10 foot depths while the other is five foot off the bottom. I use only quick strike rigs, since we are concerned about releasing the fish. 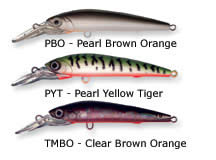 Once the water temperature drops below 40 degrees on your favorite flowage move over to a clear water natural lake. These lakes will produce right until ice up or the close of the season whichever comes first. Deep structure, points and weedlines are all productive, since these areas are close to deep water. Deep diving crankbaits are an effective presentation with my favorite being the Hydro Minnow Muskie by Yo-Zuri. The finish on these crankbaits is augmented by the oversized 3D eyes, integral gill plates and etched lateral line. www.yo-zuri.com Large plastic baits can also effective since they enable you to work all levels of the water column. My rod of choice when fishing crankbaits is a Lamiglas LGM 70 MH. www.lamiglas.com

The best feeding periods on natural lakes in the late occur at late afternoon. However, on overcast days muskies can move throughout the day. Like flowages don't go on the water without suckers.

Smallmouth also can put on the feedbag big time in the late fall. Choosing the proper lake is important. Clear water lakes with limited structure and a restricted forage base are the key. Many deep clear water lakes are home to giant smallmouth. However, in summer and early fall large fish are difficult to locate let alone catch them. By late October and early November food is limited and large smallmouth will school up. Once you locate the primary forage base on the lake smallmouth won't be far behind. Finding spawning ciscos is the key to smallmouth location. Besides having a population of big smallmouth it should be a lake void of muskies. Muskies will dominate the food chain and smallmouth movements will be unpredictable.

Don't make the mistake of only fishing big lakes. Small clear water lakes can hold a population of large smallmouth. Each year I boat a number of 20 inch plus smallmouth from a lake only 200-acres. This small lake which name I can't mention has a smelt forages base. A healthy smallmouth population exists since the walleye population has been decimated by spearing and over harvest. These smaller lakes are easier to fish with smallmouth schooling up and holding in one or two areas of the lake.

Forage is very limited on smaller lakes. In late fall these baitfish populations are dwindled and food is limited. Once you hone in on the forage you should find smallmouth. Use your electronics to spot schools of baitfish. These areas will be any offshore structure, shoreline points and steep shorelines. With cover limited you can find schools of big smallmouth stacking up over this cover. This was a similar situation that I mentioned earlier.

"Don't make the mistake of only fishing big lakes."
Red tail chubs are my number one live bait for big smallmouth. I have had only limited success with suckers. However, if live bait is hard to obtain use what you can get. Mark a school of smallmouth and vertical jig with a jig and minnow combo. It is important to use the lightest jig possible, so you can feel the slightest pick up. If the bite is light use a plain Aberdeen hook with just enough weight to get the minnow to the bottom.

October is a time of plenty when it comes to boating large fish of all species. As I mentioned at the start of the article sometimes it is tough to decide which specie to chase.