We’re just starting to get into the summer months, so now is a good time to think about a few ideas that will help us catch more fish throughout the summer.

In the summer, fish do one thing: They eat. In the spring, spawning is their priority. After the spawn and a recovery period of a few days, the fish will be wherever the food is. If they’re eating perch, they’ll be where the perch are. If crawdads are on the menu, the fish will be looking for a meal near rocks or wherever crawdads are. If you want to catch fish in the summer, look for their food.

More and more, anglers are relying on their sonar to show them where the fish are. In the past, sonar was used to find structure. Modern sonar is sensitive enough to show fish. If you’re going over an area where there is no structure, but you see fish suspended, in some bodies of water, those could be walleyes. It might be a good idea to pull a crankbait or spinner rig through those fish if you’re after walleyes. Sonar is a very important tool for catching fish, especially in the summer. Humminbird is producing sonar units for every need. They incorporate all the necessary features and they’re easy to use. 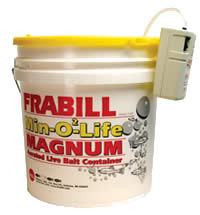 You can move faster for fish in the summer. As the water warms, a faster presentation can be good. Lots of walleye anglers troll crankbaits in the two mile per hour range, some even faster, with great success during the warm weather months.

Just as big fish eat more in the summer, so do little fish. Sometimes those little fish pecking at our crawlers, leeches, and minnows get annoying. Soft baits like Power Bait or Gulp! will still get pecked, but those pecks don’t destroy the soft bait like they do live bait. If you haven’t added soft bait to your fishing bag-of-tricks, you should.

If live shiners are what the fish want, and sometimes they do get very selective, you’re going to need to keep those shiners in an aerated bait container. Frabill’s Aqua-Life is the best bait container I’ve used. I’ve kept several dozen shiners alive all day in very hot weather in this bait pail.

"If you haven’t added soft bait to your fishing bag-of-tricks, you should."
Don’t spend too much time in one spot. Keep moving until you find an area where there are fish. Once you find the fish, you might want to slow down and work the spot, but usually it works best to find the fish, fish the spot and catch the biters, then move on.

Wear sun screen! That’s an important one. Sun burn is no fun, and the long term effects of too much sun can be unpleasant. Fifteen SPF sunscreen is the minimum you should use, and lots of very smart people say that thirty SPF is what you should go with for the best coverage.

If you keep these few ideas in mind, you’re going to greatly increase your chances of catching more fish in the next few months.